Ngawang Sangdrol-la: The Story of One Tibetan Political Prisoner

During her trip to the southwest, she also spoke to an over-crowded audience at Fort Lewis College in Durango. When she came to visit Tara Mandala the next day, she expressed her gratitude and awe at the beauty of the shrine room, decorated in traditional Tibetan murals and hung with colorful Buddhist silk paintings. Tara Mandala’s 25 residents sat on maroon cushions arranged circularly around Ngawang’s seat in front of the main shrine. She told her story in a slow, small voice, and as the atrocities she had endured filled the room, her audience settled into a painful, stunned silence. Many of her stories are unspeakable, and yet here was this modest woman, quietly, honestly recounting them.

Born in 1977 in Tibet’s capital city of Lhasa, Sangdrol learned to revere and honor Tibetan culture as a child; her family believed in the Tibetan Freedom struggle and took an active part in protesting the Chinese occupation of their country, which had begun with the 1949 invasion. At the age of 11, Sangdrol left primary school, since the education offered in Lhasa’s public schools consisted mostly of Chinese propaganda. At that age, Sangdrol became a nun and moved to a nearby nunnery. However, much of the nunnery had been destroyed in the Cultural Revolution, so instead of studying, the nuns spent their days restoring and repairing the buildings. Referring to this time, Sangdrol says, “I was filled with pain to see my country occupied.”

Then, one afternoon, 13-year-old Sangdrol went with several other nuns to peacefully protest for His Holiness the Dalai Lama at Norbulingka, the royal summer residence. She shouted, “Long Live the Dalai Lama!” and “Free Tibet” with her sisters. She was arrested on the spot and sentenced to nine months in prison. Two years later, she attended another protest, and was arrested again, this time with a three-year sentence. When she sang freedom songs in prison, her sentence was increased to six years.

In 1996, while still in prison, she shouted Free Tibet slogans and received a sentence of eight more years. At this time, the Chinese prison guards put her in solitary confinement for six months. Although she did not have any formal training in Buddhist meditation practice, Ngawang created a forbidden mala by making knots in a piece of yarn unraveled from her sweater. She secretly recited mantra while visualizing His Holiness the Dalai Lama above the crown of her head.

In 1998, the prison guards put up Chinese flags in the prisoners’ quarters and when she protested with her prison-mates, 21-year-old Sangdrol received six more years added to her already burgeoning sentence of 17 years. Now her total sentence comprised 23 years.

In prison, the guards routinely beat the prisoners with iron rods, water hoses, bamboo sticks, and electric prods. Kicking and slapping didn’t count as beatings, as they occurred so regularly. They hung the prisoners from their wrists tied behind their backs, dislocating shoulders. They put electric prods down Sangdrol’s shirt and in her mouth, demanding that she tell them what she had shouted during the protests. If she didn’t tell them, they beat her harder. If she did tell them, they beat her harder still.

During part of the time that Sangdrol lived in prison, her father was also arrested for protesting. The men and women lived in separate barracks, but one Sunday, as she was retrieving something from a storage shed, Sangdrol spotted her father in the window of his cell block. She shouted out to him, “Father!” Afflicted with poor eyesight, he could not see his daughter; he looked back and forth around the compound, bewildered. She continued to shout, “Father! Father!” If the guards heard her, she would be severely punished, but her desire to see her father outweighed her fear. Finally, several prisoners near her dad pointed up to the window where she stood, desperately waving. He finally saw her. She burst into tears and ran to the door of his cell block. Although it was locked, she could slip her fingers through and touch her father’s outstretched hand for a few moments. This was the first time she saw her father in prison, and although she saw him several other times since then, by the time she was released, he had died from the beatings and torture he’d endured over the eight-year period he’d spent in prison.

In 2000, nine years into her sentence, the Chinese government came under severe international pressures criticizing its treatment of political prisoners. The cassette tape recorded by fourteen of the imprisoned nuns, including Sangdrol, who sang songs about their suffering and their dedication to Tibet and the Dalai Lama had made its way to the international community and generated a large campaign for the nuns’ release. Prison conditions bettered, and finally, in 2002, the 26-year-old Sangdrol was released. Now she continues her protests from New York City, where she received asylum in 2003 for medical treatment. She lobbies for current political prisoners as well as those who have been released; many are so damaged that they cannot go back to work or school. Her family has been scattered over the globe: she has two brothers in India, one brother in New York, two brothers and one sister still in Lhasa. Although she speaks with them by phone, they can never mention anything political. During the entire year of 2008, the phone did not work. Now Ngawang is married and expecting a son, due in July. New York city is very busy, says Sangdrol, but she loves it. With 6,000 Tibetans in residence, she finds a large and supportive community.

Sangdrol mentioned the March 10, 2008 protests in Lhasa and across Tibet, describing how many Tibetans still do not accept Chinese rule. Many people continue to die and to be arrested by Chinese authorities. Steeped in propaganda, most Chinese people do not understand why the Tibetans are not grateful for all the money and resources the government is devoting to Tibet. This divide in worldviews continues to clash in most Tibetan cities, where the Tibetans share their streets with a rapidly growing Chinese population.

Ngawang Sangdrol encourages the involvement of Western nations in the Tibetan struggle. She says that international pressures have made a difference in the immediate treatment of political prisoners. Some Western dharma centers, she says, choose to remove themselves from all political issues, separating spiritual practice from worldly concerns. However, she says, the Tibetan struggle is inherently cultural and religious, as the Tibetans risk losing not only their homeland but also their practice of spirituality and other cultural arts. She encourages everyone to become involved, especially those of us who find inspiration in the Buddhadharma.

Through her efforts and through ours, may the people of Tibet find peace and prosperity in their homeland.

For more information on the current situation in Tibet, visit High Peaks Pure Earth, a site providing insightful commentary on Tibet-related news and issues and translations from Tibetan and Chinese blogs.

For daily updates on news affairs in Tibet, visit the World Tibet Network News. Sign up here to receive their postings.

To find out more about political support and lobbying for Tibet, visit the Students for a Free Tibet website. 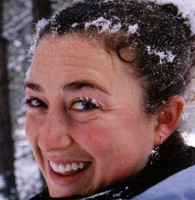 Devon Ward-Thommes, M.F.A, R.Y.T., is a devoted yogini, a poet and essayist, and a practitioner of Ashtanga Yoga and Vajrayana Buddhism.  Her life’s passion is awakening lo… Read full bio