Dear ocean; I love you.

Growing up, I never lived close to the ocean. I wasn’t one of those kids that naturally learned how to swim. We didn’t go to the beach on the weekends (I’m from Sweden; what beach?), there was no surfing, no sailing, no sandy feet in flip-flops. We did other things. I practiced gymnastics, my brother played tennis. We’d go to the park, or drive to the country where my cousins lived and there were cows (a lot of cows.) We had a country house by the water, but I never really liked that part. The sea was cold (like, Sweden-cold) and dark, and if you were unlucky someone would throw seaweed at you. I always thought the ocean was scary. Fish lived there.  And how could you really ever know what was at the bottom? On land there were blueberries, which would lead to mom’s homemade blueberry pie—the best thing in the world. And there were deer. And card games with my grandmother. I much preferred that.

Actually, I didn’t do very well with water at all when I was a kid. I don’t know if it was because of where my family lived (we were “city people”, as my farmer cousins like to put it). Maybe sea life just wasn’t for me. Or perhaps it had to do with the fact that the happiest memories of my childhood were destroyed by the ocean when, a sunny day in June, my stepfather crashed his combat airplane into the glistening sea and life would never be the same.

Sorry about that, I didn’t mean to get too serious here. But it was a big part of me—the ocean and how it took away a piece of our family. Eventually we stopped talking about it (of course we suffer in silence, we’re Scandinavian!). Life moved on, there were less blueberry pies and more crying into pillows but it moved on nonetheless. And no one ever really taught me how to swim. I mean, I eventually figured it out on my own, the kicking and the sweeping of arms, but I was never any good at it. I stay afloat and I know how to get from A to B but I’m never going to be doing laps in an Olympic size pool. I still can’t open my eyes under water without feeling very uncomfortable (there is a reason fish don’t have eyelids!) and I can’t hold my breath for very long, I never could. Being asthmatic, the whole idea of intentionally not breathing goes against my natural instincts. The ocean and me were like pickles and ice cream; apart they’re fine, great even, but put them together and you have yourself one cold, uncomfortable pickle.

As I got older, a shift took place (not in the pickle and ice cream not going together-thing, that’s still the case): I grew up. With a heavy past and a complicated family life in Sweden got dry, almost suffocating. It was ok, but it was just like my swimming; I only knew how to stay afloat. There was no living, mainly kicking to survive. And as I grew out of my Barbie’s and into my Absolut (like the cows, there was a lot of Absolut Vodka) and then finally, after a few years of drinking and smoking things I’m probably still working out of my system, I grew out of that too, there was a shift. It was like some grand, mysterious force began pulling me away from land and suddenly, I needed water—vast expanses of it.

So after graduating high school I packed my bags, left silly old dark and oh-so-cold Sweden and moved straight to the beach.

I spent two years living in Costa Rica so close to the ocean I could determine how big the surf was without getting out of bed. No more cows, no more vodka. The sound of the waves would cradle me to sleep in the evening and gently wake me up in the morning. The first thing I’d do, every single sunrise, was take my dog (yes, along the way I’ve acquired one or two of those), walk the 15 steps to the beach and throw myself into the ocean. I literally threw myself at it, as if I was leaving behind darker, colder days, surrendering completely to this mysterious new companion. The ocean became my best friend. Still is, to this day. Most things I know about life and love and loss, I learned through water. It took a while; I had to go through a few boyfriends, half a continent and a lot of yoga, but I began learning how to swim.

I know now, the cold isn’t so bad. Love and warmth is there if you are open to it. And sometimes people leave, it happens on land too, and eventually you will understand and it will make you stronger. Also, people are always going to throw seaweed at you (it usually means they like you).

A few years later and now living in Aruba, my love affair with the ocean continues. Life on a tiny Caribbean island means I am surrounded by water, all the time! I feel so blessed having the ocean right around the corner everywhere I go. I teach yoga right on the beach every day, I take my dogs for walks (three of them now) and watch them throw themselves in the water with the same surrender I did, only now to escape the heat and not the cold. I surf, wind and wave, and cautiously drifting towards the kind you do with a kite. And I swim now.  There is some floating involved, I admit, but only to smilingly look at the scattered clouds drifting by above me. I change into my bikini after each morning class and I swim. I would swim to Panama if I could, just to prove a point. In this water, finally, I find peace.

Ocean, I’m yours. Until death do us part, and probably long past that. Fish and seaweed and all. I love you. 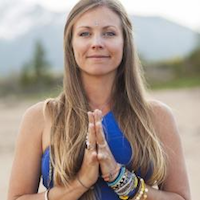 Rachel Brathen is a yogi on a world tour. Born and raised in Sweden, she currently resides in the beautiful island of Aruba where she is busy teaching yoga at a resort in the … Read full bio