The Surprising Reason so many of us Struggle with Food.

What I realized as I went through recovery, healed my relationship with food, and figured out what worked for me was this:

I was not born with disordered eating patterns. I was not a “food addict” or “sugar addict,” I was not fundamentally damaged.

What I figured out was that at some point something happened—something that disconnected me from my intuitive choices, wants, and my hunger.

What happened to me was…dieting.

We are born with a wise body that knows what it wants and needs to eat. But at some point, we stop tuning in with that intuition and instead start listening to what diets and food programs tell us to do. We start making weight loss and weight control our main goal, and something begins to get messed up as we keep controlling our food and bodies.

When we listen to the “shoulds” instead of our own wants around food, when this becomes a habit that prevents us from having a sane relationship with food, this is when the issue begins.

Do you remember the first time you began thinking like a dieter? Do you even remember how life looked before you began attaching morality to your food choices and judging your food as “good” or “bad”?

For me, it began in the fifth grade.

Our science teacher made us keep track of our daily food intake for a week as part of a nutrition lesson. I wrote down everything I ate that week. I was still a normal eater at the time.

I kept track of all my meals and wrote how I ate an ice cream sundae from McDonald’s almost every day after school, and snacks, too.

I was a happy, active kid, and yes, I liked snacks and ice cream. But when I showed it to my teacher, she pointed it wasn’t super healthy to eat all that sugar and that I could make healthier choices, such as fruits.

There was nothing intrinsically damaging about this lesson. Yet the message I got was that an ice cream sundae was a bad choice, while fruit was a good choice. Instead of just adding more fruits or fiber to my meals, my understanding was that I should replace the “bad” food with the “good” food.

I obviously wanted to be good at everything I did, so I picked up some nutrition books from the library and learned about calorie counting and diets. (Just for laughs, here are some vintage diet books. Check out their cheesy titles! Sadly, I don’t think the main ideas have changed that much.)

After nerding out on those books, I learned I had to eat a specific amount of calories for my weight and that I could control my food intake to eat fewer calories if I wanted to. I also looked at healthy food options to replace my ice cream sundaes with other, “better” foods.

At the time, the whole thing felt new and challenging, and I didn’t share with anyone else what I was doing.

The irony is that I had never cared about ice cream sundaes that much until I was taught that sundaes were “bad” for me! Then, after a period of deprivation from this food, my brain and appetite reacted—suddenly I wanted ice cream so bad.

I was 10 years old, and this was my first experience with “scarcity mentality,” a tunnel vision brain that now focused on the things it couldn’t have. For me, it was ice cream.

Something about not allowing myself to have it, at a physical but also emotional level (because I deemed ice cream as a “bad” food), made me want it more, and once I decided to have ice cream again, I found myself overeating it. This was also my first experience with “last supper mentality,” or the idea that “I messed up my own food rule, so now I might as well let loose and eat it all.”

When I work with clients, we practice how to shut off those survival mechanisms so that we stop feeling “scarcity mentality” and “last supper” mentality around food. We also practice reconnecting to our hunger and fullness signals all over again, sort of like when we were kids and food was just one of the fun things we tried.

That was my first experience trying to control my food and weight. It was a long time ago, but that’s when diet mentality started for me. When I work with clients who want to heal their relationship to food, I make sure that they are fully aware how their history of dieting and restricting (both physically but also emotionally) is one of the main causes of binging, food obsessing, emotional eating, and other “food issues.” Once this is clear, they can begin to see where they are still restricting and depriving themselves and practice healing these areas so that food loses power over them.

Struggling with food is a problem that affects different groups of people. The National Association of Anorexia Nervosa and Associated Disorders (ANAD) collected “Eating Disorders Statistics,” and reported that approximately 91 percent of women are unhappy with their bodies and resort to dieting to achieve their “ideal” body shape. Fifty-eight percent of college-aged girls feel pressured to be a certain weight.

Using data from a 10-year survey of more than 2,300 girls, this study by the University of South California from 2009 revealed that black girls were 50 percent more likely than white girls to exhibit bulimic behavior, including both binging and purging, compared to 1.7 percent of white girls.

I have yet to find a more concrete study about binge eating and body image issues in the Asian American, Latinx, and Muslim communities, but that might be because, according to Slate, research has indicated that clinicians are less likely to diagnose eating disorders in women of color.

We might differ across gender, race, and class, yet what we have in common is that we all went on a diet at some point. With time and habits formed, that diet might have developed into a broken relationship with our food, wants, hunger, desires, and needs.

Diets don’t work and are a major cause of bingeing, emotional eating, and other disordered eating patterns.

There is a multibillion dollar diet industry profiting from people’s insecurities and triggering them to go insane to assimilate to a very specific body shape and size.

I’ve wasted years struggling with food issues when I could have been finding my voice and taking over the world in my own way.

My disordered eating patterns started with a diet. Do you remember your first diet? 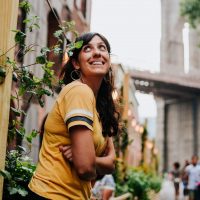