The Life-or-Death Danger in thinking that being Yogis means we have our Sh*t Together.

When I completed my first yoga teacher training in Thailand years ago, I had a complicated yet wonderful teacher who was cofounder and coteacher of the program.

She had a hell of a story behind her, but was unable to allow herself to be vulnerable enough to share it.

When life became extremely difficult for her, she was unable or unwilling to accept help from outside the realm of spiritual practice. Instead, she bottled up her pain and struggles and tried to “cure” herself with yoga. This was not simple, asana-based yoga; this was the esoteric teachings of tantra, yantra, pranayama, and mantra—practices that are thought to be in the causal realm (i.e. able to shift reality).

Ultimately, they did not help her. I’m not sure she was ever on a pedestal per se, but she believed on some level that she had to be a shining example of how yoga cures everything.

She didn’t want to share her story, and her shame around it prevented her from seeking the medical and professional help she needed. She wanted yoga to fix her.

It didn’t. And it doesn’t cure everything.

I 100 percent know that turning to yoga and meditation when all manner of health-related issues, both mental and physical, arise can be beneficial. But yoga does not in and of itself prevent mental health issues, even for those who are long-term practitioners, and it is not the panacea for all that ails you. Spoiler alert: yogis with decades of practice are not immune to mental or physical illness. When the “healing” practices are already in place, what then? Sometimes, many times, other streams of support are required.

My teacher refused to take medication because she was so engulfed by the thoughts that as a yogi, she “should” be able to overcome any and all illnesses of the body and mind. She had visited a doctor and been prescribed medication to help her. She refused to take it and refused to talk about what was happening. Instead, she killed herself.

As a community, we were shocked and devastated. But, even though we didn’t hear the depth of horrors from her backstory until after she was gone, nobody who had been in any way close to her was surprised.

When famous tantra teacher Psalm Isadora died from suicide in 2017, many of her followers denied the very possibility she could have taken her own life, instead coming up with conspiracies and denials. They had this woman on such a pedestal that there was no room in their ideation for her to not have overcome her demons.

Yogis and spiritual teachers all have their sh*t together, right?

Michael Stone died of an accidental overdose after scoring street drugs to self-medicate his bipolar disorder after a clinic turned him away. I had never met Michael and did not know him beyond some of his writings, but I saw such an outpouring of love and honoring of a man who was a dear teacher to many people.

I also saw plenty of yogis posting disrespectful opinions on why he wasn’t completely and publicly open about his bipolar disorder. I can only imagine from my own experience with mental health that leaving himself open to the unsolicited advice and judgments of the people who didn’t hold a safe space for him may have been part of it.

Mental health struggles tend to come with a large side order of shame. I rarely spend time these days with people who do not know how my life has been these past few years—the good and the very bad. For me, close friendships now come exclusively with an absolute commitment to authenticity from both sides, or they don’t develop at all. My circle is small but damn, it’s strong.

On the back of a traumatizing work experience that left me dissociated, when my relationship ended suddenly and I immediately lost all contact with the child I had been raising for three years, I landed back in Ireland just about as broken as I can imagine any human being. In my agony, I heard such gems as “onwards and upwards, sister,” “all that trauma comes from your childhood, it’s just coming up for you to look at it,” and, “I thought you were a yoga teacher and didn’t get bothered by that stuff anymore.”

I’m sure people meant well. Still, sometimes their words landed like stone-cold knives in my heart. We do mostly mean well, but, my god, we can get it wrong. Now, I simply don’t share my most vulnerable self (I’m talking about unintegrated issues I have) without knowing I’m absolutely safe.

As Brené Brown says, do not trust your most vulnerable secrets to those who have not earned the right to hear them. Go for the friend who knows you as your best self and who knows you in March, April, and Mayday. Go older, go younger, go on resonance. Go to the ones you know have wisdom and a steady, grounded voice. The ones you recognise as living in their own truth and who you trust will get down in vulnerability with you.

Things can and do change, and there are people who love and care for you who want to help you, even if they don’t know how. Talking might be the first step. And no, it’s doesn’t have to be articulate or even clear.

I know that professional mental health support can be hit-or-miss. Underfunding, overprescription of medication, and a lack of opportunity to talk things through are problematic issues.

I am lucky in that I have had excellent therapists along the way to help me through my storms. Still, the most helpful, nurturing, and understanding conversations are ongoing and have come from my own circle. I know that one understanding friend can make the difference between crying in shame and laughing out loud at the absurdity of life.

There is so much truth in Brené Brown’s statement that empathy and connection are the antidotes to shame. You do not have to talk about it openly with lots of people, but please, find one, two, or a small handful of people you can trust. You’ll get to be there for them, too.

You will find a new compassion and a new empathy for others. You may discover a depth of friendship that will sustain you throughout your life. 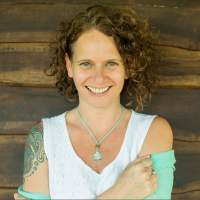