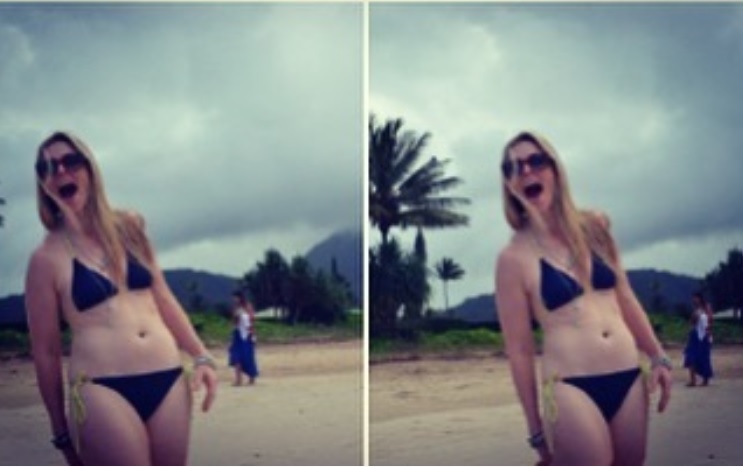 There’s no such thing as a “before” photo.

There’s a photo of how you look. Right now. Today. At this nanosecond.

The diet and fitness industry loves the idea of the “before” and “after” photos. There is no better or more powerful sales tool than a photo of someone in swimwear, split screened with a photo of that same person in swimwear months later, apparently “transformed.”

It’s compelling. But it’s a compelling sales tactic that (sorry to say) keeps you trapped in the cultural machine of health and fitness lies that you (secretly) hope might forever be the magic bullet that will get you the results you want “this time.”

“This time,” there will be enough “accountability” and “discipline” to stick with it and make it last forever. “This time,” your body will change and you will never struggle with food cravings or sticking to an exercise program again.

Sorry. But there’s a heavy statistical probability that it is not going to happen like that.

I’m not in favour of not taking steps to improve your fitness or better your eating habits or experimenting or taking action. Do those things.

I’m not even not in favour of photos: photos can be a useful tool to identify progress, because people (including me and including you) literally forget what we used to look and feel like. Make sure you have fabulous photos of you doing life.

What I’m actively not in favour of is the “before” photo. The word “before” (or similar—it’s the idea, not the word itself) belies a mindset that basically guarantees a conclusion that’s opposite of what you want it to be in the long run.

The mindset of having a “before” shot implies that there is a “start” (and a finish). Factually: health, weight, and fitness have no start (or finish). It doesn’t matter what fad diet or intense exercise program you engage in for the next 21 or 30 or 60 or 90 days: the body you have today is the same body you have had since the start of your life and the same body you will have for the rest of your life. Your whole life.

If you think there is a “before,” then you have an underlying belief in the magic of a workout, pill, powder, supplement, food, diet, action, or exercise that will absolve you of everything that’s come before and everything that will come later. There, sadly, is no such thing as a magic, fresh start that will make the struggles and challenges you’ve had in the past simply vanish and never appear again. Those struggles will appear again, and unless you work on the underlying reasons for the struggle and get an underlying education on your body from a practitioner who’s not trying to sell you anything except that education, your ability to cope with those struggles won’t change.

I’ve also never yet encountered a person who takes a “before” picture, who isn’t embarking on some kind of “journey,” that entails cutting out an entire macronutrient or adding in a shake or supplement or embarking on an intensely unsustainable exercise program.

It’s a hard truth to admit to ourselves that tomorrow isn’t a hard line in the sand where everything that came before simply goes away and never returns, that to make those changes, we have to slog through our emotions and personal choices and self-worth.

It’s a hard truth that there is no miracle other than small, boring, healthy eating choices that are incorporated slowly and feel so effortless that it’s boring to even mention it to your coworker or family. It’s disappointing to realize that if we don’t like a particular exercise protocol, no download or DVD is going to change what we really and truthfully don’t like. It’s hard to look in the mirror in a culture of “just do it” and admit that maybe the exercise we want to do doesn’t even feel like exercise to us: it’s commuting to work by bike and doing yin yoga lying on the floor.

It takes courage to step outside the strength of the culture that says “we can if we just try” and accept that you don’t want to make the sacrifices that having the body of your dreams—if you are even genetically capable of getting it—requires, because there are other things that matter more than six hours a day at the gym. It’s scary to quit running six miles a day because that’s what you are “supposed” to do according to the magazines and your co-workers.

Pro tip: it actually makes no difference to your health or to your physique whether you do have a “fitness regime” at the gym that requires “discipline” or whether you just do movement you authentically love, like gardening or walking to work.

So buying into the “before” photo is buying into all the ways that the diet and fitness industry have you trapped into endless “lifestyle programs” and food trends and coaching programs.

And about those photos?

We all have photos of how we looked 20 years ago, and those can show powerful stories of physical and emotional and intellectual changes. But those photos jump from A to Z and skip the middle. They skip the part where in order to permanently lose 30 pounds, there was a path of learning how to get real, which probably entailed some combination of: learning how to manage emotions without food or exercise, getting support, quitting the things and people that create stress, getting enough sleep, being brutally and internally honest, and living the kind of life that requires no rebellion through Oreos.

The before and after screenshots look like a miracle. But real life bodies are not linear miracles. Just as there is no “before,” there’s no “after” either. There’s five pounds up and five pounds down. There’s falling off the wagon and getting back on. There’s tweaks with hormones and life changes and new jobs and babies and homes and friends.

Most of the “after” photos are simply at the end of a program. Not a month later or a year later. Most of the “Biggest Loser” contestants gained most of their weight back, for example.

Quit buying into the lies. Michael Pollan summarized everything you need to know about nutrition thusly: “Eat food, not too much, mostly plants.”

Forget the rest. It’s not, and never has been, about the gluten or the ketones or sugar or 21-day fitness challenge.

It’s about your life and your choices and your emotions. And if you can’t eat real food or you are eating too much or you are “addicted” to a good group, it’s because something in your life needs to be re-aligned and re-educated and re-balanced.

Step away from the “before” photos. Quit buying hope in a static moment in a swimsuit. Instead, get out your camera and get photos of yourself living life.

And if there’s a moment you look at yourself and realize you’ve lost 30 pounds and want to post it on Facebook, then tell the honest story about those changes from top to bottom when you tell the story—the emotions and the divorce and the changes that you took to get real and get aligned and feel like the human that you want to be in the world.

And that’s kind of the whole point.

Janis Isaman, founder of My Body Couture, specializes in helping people rid themselves of physical and emotional pain. She’s highly certified in both fitness and nutrition m… Read full bio