How my Anger Healed Me.

I looked at my friend across the table at happy hour while dipping my chip in the guacamole sauce and taking a sip of my skinny margarita.

“Well,” she looked at me, paused, then continued, “Maybe you don’t have to.”

I stopped at that moment, realizing that perhaps I needed someone to give me permission to be angry. It was similar to a conversation I had with my sister about my ex about a year ago—one month before I ended my engagement.

I shared with my sister the fight I had just gotten into with my ex. Right before my sister hung up the phone, she said to me, “You don’t have to get married if you don’t want to.” It was as if I was subliminally searching for someone else to give me a license to feel what I felt or do what I needed to do.

Anger was never an emotion I resorted to. Sadness? Sure. Moodiness or irritability? Absolutely. But getting angry was not only something I rarely let myself feel but an emotion that felt was bad or wrong.

I’m not sure if my avoidance of anger came from my people-pleasing nature, the societal conditioning that girls are supposed to be calm and quiet, or that anger could, God forbid, hurt someone else more than I was hurt.

Then, like the rest of the world, 2020 handed me hardship. While I was overwhelmed and felt like I couldn’t handle one more thing—as far as the grieving process goes—my sadness evolved into anger.

Finding out that my ex was indeed cheating our whole relationship? Fury.

Moving into my new apartment, then having all my jewelry stolen? Are you joking?

My mom’s cancer diagnosis? Middle fingers in the air to you, God.

Being days away from moving into my new office space, then having the country shut down? This can’t be fair.

All of a sudden, my grief, sadness, and pain shifted. I was no longer sad—I was pissed. I wondered, as someone who avoided anger and found it uncomfortable, what to do with all my rage?

I started to do things that felt harsh, new, and euphoric all at once.

I screamed at the top of my lungs in my car.

I went trail-running up mountains in the middle of the workday to blow off steam.

I dropped lots of f-bombs in conversations with friends and family as I processed my latest life events.

I walked toward my anger and embraced it instead of being scared and backing away from it.

As the dust settled, I began to practically wonder, “What do I do with this anger? Why has anger been so foreign to me for the past 30 years?”

I moved on from my stolen jewelry, thanked the divine for a cancer-free report from my mom’s doctors, and eventually moved into my office space.

But my broken engagement? Anger still fumed inside me.

“Here’s what I’m mad about lately,” I said as I walked the beach on vacation with my sister.

“I’m in an anger stage, if you can’t tell. I’ve been thinking about it while being here on the beach, spending all this time alone and in the place where we were supposed to get married. While I know in the future I’d rather have the relationship, I think back to the engagement process. Everything special and exciting—the fun that should go into planning a wedding—feels like it was taken away from me.”

My sister waded in the ocean water as I talked. The waves splashed against her dress, getting her wet, but she didn’t seem to notice as she listened emphatically.

“He didn’t want to marry me either,” I spoke with an indignant realization.

“He wasn’t faithful throughout our relationship. That’s fine if he didn’t want to marry me, but why get down on one knee and go through with it? I went through the process of having someone look me in the eye, asking to marry me, wearing a ring, buying a wedding dress, and having a fiancée only to have it all taken away from me. It doesn’t feel fair. And I’m not sad about it—but I’m mad. I’m mad because he ruined all those things that I can never get back to and that I’ll never want to do again.”

I could see the tears start to well up in her eyes. “You’re right; that isn’t fair. And I would definitely be mad, too.”

There were so many layers to my pain, anger, and hurt. Each layer of anger was something new to process. I came back to the conversation about forgiveness I had over Mexican food with my friend. While I didn’t feel ready to forgive my ex, I was curious even if I felt I wasn’t ready to forgive him: what if I was ready to forgive myself? What if a huge source of my anger was really anger at myself?

By acknowledging I was mad at myself, I realized I could no longer hold what I know now against myself. I no longer wanted to be mad at myself for not leaving him earlier and for ignoring my gut time and time again.

Even though I avoided my anger, once I forgave myself, I noticed my anger’s healing power. It was the anger, rage, and fury that burned bright inside me. It was my anger that gave me the strength to leave in the first place.

My anger was valid.

My anger burst to the surface and said, “Enough.”

It was my anger that said, “You deserve more; it’s time to get out of this relationship.”

My anger gave me the strength to pack up and leave my old house.

My anger motivated me to start earning enough money in my business to afford to live in a beautiful apartment alone.

My anger told me to take the jump into the unknown where there was no one to catch me.

Maybe my anger gave me my power. Maybe it wasn’t anger that made me uncomfortable all these years—maybe it was about realizing how powerful I was.

While I let go of my fury in other areas of my life, I knew the anger about my past relationship needed to be held a bit longer.

I decided to welcome it and let it be with me as long as it needed. Then, all of a sudden, as I lie in bed one night, right on the edge between awake and asleep, it hits me. I felt that my anger had served its purpose, but I also knew that I didn’t want to carry it anymore.

I didn’t force it.

I didn’t tell it to go away.

My anger healed me, and then it left.

My anger helped me survive and got me out a wrong relationship.

My anger pushed me to step into my power.

While I let go of my fury, if it ever comes back, I’m allowing it to stay for however long it needs.

Nevertheless, my newfound strength and power are something I refuse to let go of. 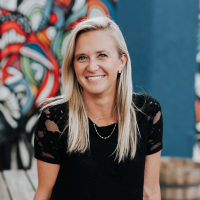 Georgia Grey is a Holistic Health Coach and founder of WBH Nutrition Co. She specializes in autoimmune nutrition and resides in Denver, Colorado. When Georgia is not running h… Read full bio