I Have No Shame (or Hidden Trauma) from my Abortion.

I learned I was pregnant in an after-hours double feature of pharmacy trips.

The first one was solo. I was careening home, slightly buzzed from the upstairs bar that would serve us strong ones after slow-ass dinner shifts. I was just curious enough about my tender breasts and late period to sheepishly buy a pregnancy test with my pack of Camel Lights—eyes lowered. An hour or so later, I purchased another test through damp eyes, scared stiff on the razor’s edge of hysterical.

But, my steady, smart, “false positives can happen, you know?” roommate was willing to drive me to an all-night Rite Aid to get a second opinion.

And there it was: science! I was irrefutably, and now twice-confirmed, pregnant.

How it happened: I had sex (on birth control) while taking antibiotics. Ladies, did you know this is a thing? I did not. He was my first love and first partner, and we thought we were responsible—covered—not reckless. The fine print footnotes on oral contraception (which I’d taken to regulate menstruation long before I was sexually active, mind you) were just that—tiny, ignorable, not at all overt.

Could I simultaneously knock out my symptoms with a Z-pack and reconnect with my partner on the tail end of a bout of summer strep? Guess not. My GPA was Dean’s List-worthy, and my suburban, Christian upbringing still clanging in my ears, if no longer my heart.

And yet, here I was with a fertilized egg. Oops!

The decision I made to end my unplanned pregnancy was swift and uncontested, not overwrought.

While I can empathize that this is a conundrum for many, my own reasoning was immediate and crystal clear:

1. We didn’t mean to conceive.

2. We were in love but not ready to become parents.

3. Evacuating a mass the size of my pinky fingernail was not murder—a naive and, in hindsight (which is always 20/20), cruel refrain once recited by sanctimonious teenage me, who didn’t know sh*t.

My refusal to grow a cluster of cells inside of me to term was vividly and without question a kindness. Kindness to my present and future self, to my adoring but unwitting “baby daddy,” and even more so to the kid who would not be born to other kids (who’d made an honest but big mistake). The choice was stunningly simple.

I was then and remain guilt-free for making it. To this day, I nurse no negative emotions around accessing my safe and legal abortion. I am pretty certain that these feelings (if buried) would have surfaced through rounds of therapy and self-reflection in my adult years since.

Instead, I felt and still feel immense gratitude for the love wrapped around me by people in-the-know: the friends and my future husband who never adorned me with a scarlet “A.” I also felt gratitude for the professionals who met my need and treated me with dignity and respect, as you would expect from any medical procedure. Ridding oneself of a six-week-old embryo is not a “killing,” but a matter of life, liberty, the pursuit of happiness and health.

My experience day-of was anxious solely because I had never undergone surgery, save for a routine wisdom tooth extraction earlier that year. But, once checked-in at the clinic in a city an hour’s drive north of my college town—my boyfriend off to find breakfast after I assured him (repeatedly) I was fine—I found a seat in the waiting room that was clean, serene, and altogether not sad.

There, I observed a few women of different ages, races, and no doubt, varied economic situations all poised to follow through on a decision made for their futures and that of their families. There were no tears—no perceived glowering or gnashing of teeth. On the contrary, the scene was reminiscent of the low-volume bantering of strangers in a weekend queue at a nail salon, equipped with magazines (not yet smartphones) while awaiting mani-pedis.

I don’t disregard the gravity of the decision to have an abortion or to have that procedure completed. But I mean to assure you that my experience was a wholly positive one for which I harbor no shame—no trauma. And that narrative runs counter to what’s espoused by many evangelicals and their godless but politically convenient comrades equipped with megaphones, provocative billboards, viral videos, church pulpits, and seemingly endless dollars devoted to whipping up such shame.

Since I became a statistic all those years ago, the anti-choice fearmongering of the far-right has become abundantly more obvious. It instills fear and transplants regret for the angel who you’ll never know. “Damn you for your selfishness and sin.”

This crusade may be rooted in a conviction for some, blind followership for many more, but it rarely shows up as compassion.

As politicians and single-issue voters now froth over the opportunity to ram a religious, anti-choice judge into the Supreme Court vacancy of our dearly departed Notorious RBG, I fear for this country and its millions of women whose rights are evaluated as less than their male counterparts, and in essence less than that of the unborn.

Where’s the public preciousness and faith-based devotion regarding one’s ability to build a meaningful life and make a living, versus merely producing life in its most basic, cellular form? What does pro-life mean, really, if one’s full life on Earth is an afterthought and a shrugged-off postscript to the biology budding in a womb?

Still child-free by choice, I prize reproductive freedom above most other enshrined facets of the so-called American Dream. Because planning whether and when and how to procreate influences so much else we do, and, truly, who we are.

As I shower and coo and celebrate the healthy development of babies born to friends in their 20s, 30s, and even 40s, I maintain that mothering is not a must for anyone; it should be a conscious, thoughtful choice. Not an “oopsie” carried to a conclusion of someone else’s prescribing.

The risks and probabilities associated with overturning Roe v. Wade in my lifetime are a clear and present danger to everyone who might learn they (or someone they care about) inadvertently got pregnant. I reject outright the cynical assumption that your life, and your ability to dictate who you bring into this world, is a political football.

This month, I’m early voting to maintain the freedom of choice for myself and for you—even (or perhaps especially) if you think you would make a different choice than I did with the privilege and the freedom afforded me in 2005. 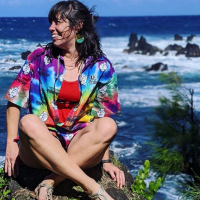 Celia S. Gregory is a public radio DJ and voter registration Team Leader. She has lived, worked and played in Nashville, Tennessee, since 2009. … Read full bio