The Heartbreak (& Hope) of American Politics.

“at least 30 people including the elderly, an electric wheelchair user and a family with small children were among those requiring medical attention…” https://t.co/qM5gmRoYFy

The American election season is gross, and it causes us to behave badly.

People are being “unfriended” far and wide, and families are cancelling holiday plans over ideological rifts. But underneath all our bad behavior, we are just a bunch of really, really passionate and hopeful Americans who believe a better future is possible.

As election season creeps (painfully slowly) to a close, I am trying to side-step the filth and instead breathe in the hope that permeates the air in America.

The checkboxes of a ballot represent millions of American hopes and dreams. Each vote is a belief in a brighter tomorrow from people who trust their government with their futures. In this light, the American election process transforms from something vulgar and terrifying into a breathtaking spectacle to behold.

There are some brutal facts staring us in the face at present: On election night (and the days to follow), half of Americans will be heartbroken. That’s roughly 160 million people, in case you were wondering! American households are nearly evenly divided between our two choices for president. And the inevitable reality of elections is that one “side” will lose. When they do, they will feel baffled, angry, frightened, and hopeless as they stare into a future they did not choose.

If past behaviors repeat, the losers will retreat into the safety of their quiet places, as the winners gloat with sanctimonious superiority. But if we don’t do better than this, the current rift between Americans is in danger of becoming a permanent split.

Election night is my Super Bowl Sunday. I don’t watch sports; I study elections. Prior to my life as a teacher and mom in Oklahoma City, I lived in Washington, D.C., and I breathed American politics.

After working for a member of Congress and as a lobbyist, I decided I definitely did not want to be a political insider. Instead, I have become an obsessive student of politics, political trends, and the issues that drive them.

The only useful thing I have ever used math for is calculating different electoral college scenarios to get my candidate of choice to the magic “270 to win.” I have election night maps and markers for my kids to fill in states as they go for one candidate or the other. I am a political junkie to the core. There. I said it.

What started out for me as an academic interest in the numerology of elections evolved into something intensely more personal. I began to care deeply about issues like health care, taxes, education, foreign relations, and civil liberties. Then I became a mom, and my stake in America’s future grew exponentially.

For three decades as a voter, I have placed my hopes on the shoulders of my country, and I have expected them to be fulfilled. You have likely done the same. This is a lot of hope to put in one nation, and she seldom disappoints us.

Hope is a rare and wonderful gift. And it takes courage to have hope, as the definition reveals. I was surprised at the complexity of its definition. I thought I would only find the most common definition, which is, “To want something to be true.” In this definition, “hope” and “wish” are not dissimilar.

But other definitions of “hope” were more enlightening, especially in view of the American psyche. “Hope: to expect with confidence; a feeling of trust; a belief that something will happen.” (Merriam-Webster)

Confidence. Trust. Belief. Now we’re getting somewhere. To hope for something means to put your whole heart into it; Americans excel at this.

Americans have always hoped for a better future. As a history teacher, it is my duty to remind you that America was founded on hope. We believed that we could carve out a new way of life for ourselves. We trusted in our own ability to rule collectively. We had confidence to break the mold of government and economics, and try something entirely new.

Belief, trust, and confidence are at the root of hope. And since the moment of its inception, our country has been hopeful about its future. Not convinced? Here’s a 10-second history review to refresh your memory.

Prior to independence, we lacked the political and economic freedom we hoped for. We didn’t simply cry, “Long Live the King!” as we returned to our service of the crown. We hoped for change. Then we fought for change. Slavery propped up American economies from the Mississippi to Manhattan for centuries, but we didn’t simply accept that abomination as a permanent reality.

We hoped for change. Then we fought for change. When racial injustice or gender inequality reared their ugly heads, we didn’t just shrug our shoulders as “the way things have always been.” We hoped for better futures for ourselves and others. And we fought, and continue to fight for those principles. We fight for and defend what we love. It’s just a shame we don’t always love the same things.

Have we, as Americans, treated each other badly over differing worldviews? Yep. Have we sometimes put our own comfort over the needs of others? Yep. Have we embraced radical ideologies because they give us community and protection during a political sh*t storm? Absolutely. Have we become so obsessed with “winning” that we have forgotten our sense of decency? No question. But perhaps all of this is because we care so damn much about this country of ours.

In looking at my own political views and why I hold them so dear, I had an epiphany. Politics is personal. When I see political views that are, to me, outrageous, I feel indignant and angry. But then I realized my anger is really just a deep need for others to share my worldview.

It makes me feel unsafe and confused to live in a community whose priorities seem so different from mine. And it is frightening in a very real sense to feel my life is in the hands of leaders who do not share my worldview. I am sure you feel the same way.

Don’t get me wrong. I am absolutely baffled by the political views that differ from mine, but I have finally stopped trying to make sense of them. It makes my head and my heart hurt.

Instead, I find tremendous peace in trying to remember that each vote cast embodies the hope of the voter.

This view is helping me deal with my inner voice who often thinks, “You’re an *sshole!” when confronted with challenging people.

I am trying to teach her to instead think, “Wow, you have a lot of hope for your country.”

Sometimes it even works. 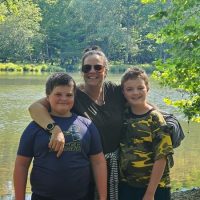 Katie Trudgeon is a recovering people pleaser who is happiest in nature, playing with puppies, drinking coffee, and cuddling—preferably all at the same time. A mom of two an… Read full bio