Why we need to Care, even when it Breaks our Hearts.

The night of the 2016 election, when I realized Donald Trump was going to win, I took a couple of anxiety pills and went to sleep.

He may win the election—but he won’t take my sleep away from me.

I woke up the next morning and cried—bawled. I watched a video, an  SNL a spoof of a Hillary-Clinton-like woman singing “Hallelujah.” I still can’t really listen to that song. It broke my heart.

I worked in an administrative office at a university at the time, and I was so inconsolable that one of our students bought me a coffee and Danish to try to make me feel better. It was sweet, but I was still devastated.

And I’d already felt so much pain—why choose to willfully usher in more of it?

After that election, I decided I’d “work on myself.” I decided to “focus on myself” and my world.

Politics, the election, the general state of the world—made me feel helpless. I felt the full weight of understanding I had no control. I couldn’t make what I wanted to happen—happen. I couldn’t force, will, cajole, manipulate, or meticulously arrange things so that everything would unfold in a way that would make me feel safe, secure, and protected. Ah, yes. I felt unsafe, unsure, and unprotected.

If I couldn’t control the circumstances outside of me, at least I could work on my inner world—figure out more deeply who I was, what I wanted—grow, expand, and spiritually evolve.

I spiritually bypassed. And that, ultimately, doesn’t lead to growth. And it doesn’t leave our hearts feeling fulfilled or satisfied—because our hearts are meant to care. We ache for a reason—those things that cause us pain mean something to us.

I’m still trying to gently wade my way out of this.

Not the inner work, although, yes, even this is excessive. But on the hesitancy to pay attention to the world around me because it makes me ache.

Because even when I try to say I don’t care, I still feel the gentle thumping of heartache or anger beating in my chest when I allow myself to look at what’s happening in the world.

It’s easy to say we don’t care, to turn our eyes away—but our hearts still feel it. They’re meant to feel it.

Over the years, as loved ones ranted and raved about Trump and his policies, I’d feel my body immediately tighten; I’d tense; I’d take deep breaths and stare blankly in front of me—unwilling to allow myself to react or get outraged. Just breathe. Don’t give in to the emotion.

I told myself I didn’t care. Politicians are the same. Trump and the Republicans will do whatever they want anyway. And who could ever be surprised by the outlandish words and actions of Trump? We knew (ahem, most of us knew) what we were getting when he stepped into office.

Ah, the lies we tell ourselves when we want to protect our hearts from pain.

The truth is the thought of the magnitude of damage the new Supreme Court could do to what matters to some of the deepest parts of me makes my heart burn; it makes me feel ill. I feel helpless, a little resigned, but also, like there’s a light, burning fire that won’t be dimmed no matter how hard I’ve tried to turn my eyes away from it.

I feel anger and indignation at the hypocrisy of the whole process of Amy Coney Barrett’s confirmation, and fear at the utter damage they could do to everything that my heart holds so dear; at the hypocrisy of lawmakers who alter laws for their sole benefit; who preach ways of living lives, when they live starkly in contrast to it; who speak about the “laziness” of those who are less fortunate, while they prosper off of our tax dollars and the laws they alter.

I don’t believe America is bad, and I don’t have strong feelings of disliking toward her—she is home. She will always be my home.

But I also don’t believe in blind allegiance or automatically, knee-jerkingly supporting the nation where we’re born—not when its leaders seek to dismantle the democracy upon which it was founded; not when large swaths of the population are heartbreakingly discriminated against; not when health care is treated like a privilege and not a basic human right.

Some parts of our country and its history make me physically and energetically cringe.

This doesn’t mean I don’t love America—I just know she can be better.

When I came to Sweden a couple of years ago, I think a waiter at a restaurant told me that most Americans who come through say something along the lines of, “I’m American. I’m so sorry. I didn’t vote for him.” What nation of people apologizes upon meeting someone?

Americans who have Trump in office.

I’m still trying to figure out how to give a care about everything in the world without devolving into all of the emotions that arise within me. Without being overcome by anger, heartache, fear, bitterness, or resentment—because, yes, those lurk within and around my lightly locked heart.

I’m trying to figure out how to let myself feel all of those feelings and emotions—because, of course, they want to be felt.

I’m loosening the grip, I’m letting go, I’m starting to wade myself in. It’s been a slow, gentle process over time (as is the tendency with pretty much everything for me).

But it’s happening. My heart is opening.

I’d like to say I don’t care, we don’t have a say, the political leaders will do what they want to do anyway. And yes, I do think that’s true…to an extent.

And we do have a say.

We have one great, big, overt, obvious say.

This is how we use our voice.

The voting turnout percentage in the United States is pathetic. Only around half the population vote for something as important as who will be president of the nation.

My heart flutters at my nerves of the outcome of this election; I can’t help feeling fear at the potential victory of Trump—although the worst, for me, is what just happened with the Supreme Court. So, so much hypocrisy.

I’m trying to allow my tender heart to move into these feelings rather than ignore them. I’ve spent years intentionally keeping them at bay—far away.

I was scared of the intensity, the immensity. I was wary of the pain and all of the other things they trigger within me—feelings of helplessness and a lack of control, just to name two.

I’m trying to figure out how to move in and open up without getting consumed in the emotion. Or, maybe I should just dive right into the emotion—explore what’s there.

But I’m afraid of the pain.

But at least it’s honest, heartfelt, and pure. It means we’re connected to our hearts; we’re open. We’re willing to let ourselves feel it, sit in it, be present in it.

I don’t know what is going to happen tonight.

I won’t pretend that I don’t care about the results.

I’ll breathe through this.

And this time, even if it hurts, I’ll continue to open up my heart, anyway. 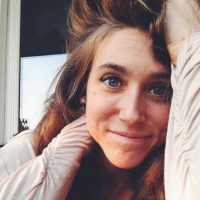 Lisa Erickson is a writer, dreamer, thinker, and recovering over-analyzer. She is enchanted by nature, and when she is not trying to string thoughts into cogent sentences, she… Read full bio