Lindsey Graham & the GOP Have to Ask Themselves: Does the Outcome Really Justify the Deed? 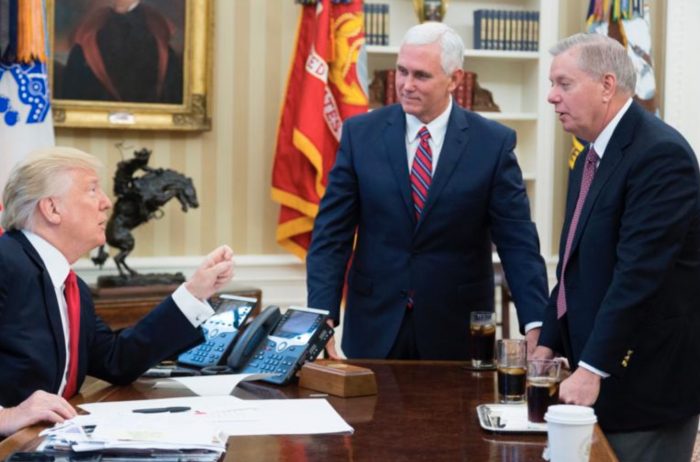 “Mr. President, this MAGA movement needs to continue; we need to unite the party.” ~ Lindsey Graham

Some of us were angry about the outcome of the impeachment trial; the Republican party is also pretty upset, but for different reasons.

After Mitch McConnell acknowledged that Donald Trump was responsible for the storm on the Capitol but voted against the impeachment, many of us thought that it couldn’t get any worse than that.

But here comes Lindsey Graham talking about Lara Trump “being the future of the Republican party.”

Just a few weeks after the disgraceful domestic terror attack in Washington, D.C., Graham viciously attacks the seven Republicans who voted in favor of impeaching Donald Trump. Richard Burr got censured by his own party in North Carolina for doing what most Americans think was the right thing to do. And many of us are asking ourselves: has Graham lost his mind?

Lindsey Graham is one of many Republican leaders who really think that backing up Trump and his family will help the party win back the Senate and House of Representatives in 2022. Who knows, maybe he is right on that, but it doesn’t make it right.

Wouldn’t this be the perfect moment to drop Trump and the rest of his family, to stop them from hijacking the GOP any longer, or to show some decency? Not for Lindsey Graham; he obviously has a hard time letting go of the MAGA movement or reflecting on what went wrong throughout the last four years.

Even if the only chance to win the midterm elections is to bank on Trump’s supporters, isn’t that a tiny bit too opportunistic? Isn’t that the same mistake the GOP made when Trump got nominated as their candidate in 2016?

It actually brings up a bigger question that the Republican party and the country should think about before taking any further steps: does the outcome really justify the deed?

This is a question many of us are facing in our daily lives. Are we supposed to do use dirty tricks to get what we desire? Does believing in something entitle us to force our will onto others in a manipulative way? What are the consequences of short-term gains in the long run?

I am sure that these Republicans who still have Trump’s back have their best intentions to make America great again. They believe in trickle-down-economics, private health care, and law and order (unless it goes against their buddies)—which is perfectly fine because we need different perspectives in politics, but how is someone like Trump the best guy they could find for the job? There are many conservatives who voted Republican in 2020 in spite of Donald Trump, not because of him.

Many conservative friends told me that they don’t appreciate Trump as a person but agree with his ultra-conservative approach. They even admit that it was necessary to create a narrative like QAnon to get people on board who normally don’t care about politics.

Old-school Republicans like Lindsey Graham and Ted Cruz know that they can’t win an election by saying, “No free healthcare, no police reform, patriarchy for the win, and all money to Wallstreet.” That’s where a con artist like Donald Trump comes in pretty handy.

The MAGA movement is based on supporters who are “fed up” by the so-called elites. They voted for Trump because he was not a representative of the political class. Many of them were hoping for a better future and new jobs in manufacturing as a result of the “America first” policy. Trump’s rejection of stricter lockdown measures spoke to the owners of small businesses who are struggling financially and the families who want their kids back in school.

These people put their hopes in a leader who was slightly different than any president before him. The Republican elite noticed that Trump was able to draw in voters who the party had lost their connection with decades ago. There is only one problem: he was lying to them to achieve that goal.

If someone really thinks that Trump actually cares about hardworking Americans, I would suggest looking at his record as a businessman. If someone really believes that the MAGA movement was meant to serve the country and not a handful of ultra-rich folks, then take a look at Trump’s statements about poor people before he was running in politics. If someone really buys into the narrative of Trump saving the children from baby-eating Liberals, then…I don’t even know what to say to that.

Lindsey Graham, Donald Trump, and Mitch McConnell are badass politicians who would do anything to gain power; they are not representing the conservative working class in America—they look down on them.

These folks truly believe that the biggest threat to the United States is a squad of four women who fight for health care and equal rights. They call Bernie Sanders a communist and try to make Joe Biden look as if he was an ally of the Chinese government. Long story short, they basically manipulate their supporters by triggering their fear of change because they know that is the only way to win an election for them.

American politics are no longer a competition between different ideas or policies; it is a battle between those who are based in reality and those who are willing to spin the truth until it fits their narrative. This is the biggest “achievement” of the MAGA movement that Graham wants to continue—the separation of reality and politics.

Marjorie Taylor Greene fantasizes about Jewish attacks from space that supposedly started the wildfires in California, Mitch McConnell believes that the riots of January 6th are not reason enough to punish the person responsible for them, and many Trump supporters still think that virologists like Dr. Fauci or donors like Bill Gates are the enemy of the people.

We can agree to disagree. We can have different opinions about policies, but we cannot continue with this mockery of democracy.

The Republican party knows that putting their fate into Trump’s hands was probably a mistake. It is time to rebuild the party, start over fresh, and learn from past mistakes. It is time to let go of something that “worked” for a while and take a look at the consequences of intoxicating the political process by endorsing a chauvinistic TV-show host.

Letting go is always a difficult thing to do. Especially when it implies to look at our own mistakes and accept some losses in the short run. Dropping Trump and the MAGA movement is a scary move for everyone who was in Team-Trump, but it doesn’t make it less necessary.

And that’s where conservative voters have to take some responsibility themselves; there are decent members of the GOP who risked their career by standing up against Trump, and there are folks like McConnell and Graham.

I hope my conservative friends will reward courageous Republicans like Mitt Romney, Lisa Murkowski, Bill Cassidy, and Susan Collins, who are all up for reelection within the next four years. And even more, I hope that Lindsey Graham does not get away with handing the GOP to one family.

More from the author: