The Unimaginable Beauty that comes with Putting Down your Armour.

I was once a young girl, timid and shy around strangers.

I was often eager to please my friends, far too trusting for my own good, and naive to the dishonest traits some people possess. Seldom would I utter the word “no.”

It has crossed my mind, on more than one occasion, if perhaps I would have carried on in that manner had it not been for a domino set of events beyond my control. Or if I would have grown into the same woman regardless.

After many years of life tales one would ordinarily only come across in corner shop magazines or an occasional blockbuster plotline—which were, in fact, all true stories of my own life—I think I was in need of something to help me cope with…well, my life in general really.

I didn’t go down the road paved with substance abuse (thankfully). I managed to scare myself out of taking any drugs at 18 and never had the notion to see what I may have been missing out on. I liked drinking, but I seemed to have a natural low tolerance for alcohol. I was too poor to gamble and too scared of my own shadow to become an adrenaline junkie, other than the odd rollercoaster ride.

No, I found something different entirely—and purely metaphorical.

I hastily dressed myself in it from head to toe and felt the weight of it applying pressure to my wounds. And there it stayed for four years.

I was not prepared to compromise even an inch. I rushed into every battle because I had the safety of my armour. For the first time, I felt like a warrior and I reveled in knowing I would never allow anyone the opportunity to hurt me again.

My armour stopped the sun from kissing my skin or warming my heart. I became as cold as the heavy exterior I had wrapped myself in. My wounds, left unattended, failed to heal or scar as they were meant to.

A young woman should flourish and embrace her femininity; I felt as though mine had betrayed me and allowed me to be cut too deeply. I banished her and in the process punished myself and denied myself the opportunity to grow. Love could have been right in front of me and I could have wanted it with every fiber of my being, but I would have needed to take off my armour and I just wasn’t prepared to do that for anyone—not even myself.

If anyone came to me with the slightest hint of attitude or malice, I was ready to cut them down to size. It didn’t matter who it was or what they had to say, I was on permanent “high alert.”

The environment I found myself in was a constant battlefield, with no time to reflect, heal, or even listen to reason. It was just one battle after the next. I was exhausted but I refused to sit a single battle out; my war cry became “It’s the principle!” because I liked to think of myself as someone with a strong moral compass. I fought other people’s battles because they were yet to find their armour or their voice.

I had a rage that burnt so ferociously that I must admit it scared me sometimes. Before I turned 27, I had never fought for anything, much less myself. So it’s not so strange that I became attached to the way my armour made me feel: like I could take on the world.

And I tried. Then one day, quite out of nowhere, I tried to take a piece of my armour off.

It had almost become a part of me. I panicked and tried to rip it all off and in the process inflicted more damage to myself than any of the things that had ever caused me to become so attached to it in the first place.

I ran to a place of safety with some of the most amazing friends I have been fortunate enough make. I soaked off what was left of the armour. And for the first time in a long time, I remembered to breathe. I allowed myself to cry a river and come back to all the parts of me that I thought were broken beyond repair.

A woman in her 30s is (I believe) a magical thing. We have healed many past experiences and look at things with fresh but wise eyes.

It’s also the summer of our lives and full of eye-opening moments that make our heart melt and smile lines appear. We don’t cling so tightly to things not meant for us: ideals, ideas, people, and places.

We develop grace and reconnect to our femininity, understanding that it is something beautiful and powerful, not scary, ugly, or weak.

We become proud of what it is to be a woman and feel blessed to have so many strong female role models in our life. And we finally understand the strength they harness to make waves in the world.

We meditate and think with more clarity, listening to ourselves and the age-old wisdom of the women who came and conquered before us.

We let go and become lighter. We don’t wear our armour but we know exactly where to find it, how it feels, and what we can overcome when we put it back on. And yet, we don’t carry the weight of it—scared to take it off; we grow and know when to run into battle and when to sit back and watch the craziness unfold. We heal the wounded instead, because we have plenty of scars already.

We know when to speak up. Our voice isn’t small anymore. And we learn not to be so surprised when people listen. We know how to make them listen now; we know the power of our eyes before a word even leaves our lips.

It is a whole new world where we finally, finally can breathe and be still and find peace and joy.

It’s the beginning of feeling a sense of authenticity and comfort in ourselves, and having a balanced understanding of ourselves and our lives—something I never imagined was possible. 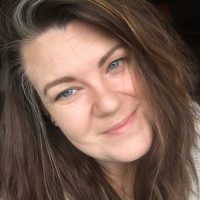 Hannah Mccoss is a writer of all sorts, lover of poetry and self-expression. … Read full bio