The Taliban & the Incel Movement: a Manifestation of Hyper-Toxic Masculinity.

This account has been rightly suspended but these tweets go straight to the heart of the Incel movement. Handmaid’s Tale writ large. pic.twitter.com/RnvI3RdVva

Like most people over the past week, I’ve seen many photos of the Taliban riding into Kabul, bristling with guns and bullets, and looking very pleased with themselves.

It dawned on me that these guys are a political manifestation of “hyper-toxic masculinity.” They represent the extreme expression of an orientation toward life which sees colour and energy as enemies, and creativity as something to be crushed, and women—who, in many ways, embody the more exuberant aspects of the life-force in all of us—as needing to be dominated, subdued, and controlled. They are only allowed to exist in the most minimal ways, and should be permanently reined in by the threat of violent punishment.

These gloating men in their beards and bandanas may think of themselves as the epitome of bravery as they ride into town with their fellow citizens cowering and hiding.

But for me, they are cowards because they are afraid of life.

Their sense of power and control comes at the cost of negating everything warm, positive, caring, and kind—in their culture and in themselves.

How alienated from life must they be to look at others with such disdain and disregard, knowing that every woman in the city fears for their life, and every girl has a sense of dread that the opportunity for education and a fulfilling life will be robbed from them?

How depressing is it to measure your achievements in terms of the things that you have destroyed, of the lives that have been curtailed, and the joy that’s been stamped out because of you?

It’s hard to understand the reason for such a collective deadening of the human spirit, for such arrogance and callous cruelty.

Was some kind of damage done to these men for them to think that eliminating pleasure is some sort of victory?

What desperate drive to power must have taken root in their hearts to require half the population to shroud themselves so completely in cloth that they are virtually invisible?

The only underlying explanation I can think of is fear: fear of not being strong, of not winning, of not having power. They feel shame and hatred toward anything that could be seen as vulnerability or “weakness,” and they project it as a hatred and fear onto the gender that, for them, represents those qualities.

In that sense, they have a lot in common with the growing number of disappointed and damaged men who identify themselves with misogynistic online groups such as “Incels.”

These are men who meet online to share their litany of complaints and anger about the women they perceive as having rejected them, without seeming to give a second thought to the possible reasons as to why they are not gaining female affection.

There’s no recognition that, with their distorted sense of entitlement and ignorant indifference to the needs of the women they are hoping to attract, they are themselves sabotaging any hope of finding  intimacy and closeness with a female partner.

It never seems to occur to them to take any responsibility for the rejections they are eliciting. Like children who blame a glass for shattering when they drop it and fail to learn how to avoid it happening again, these men are perpetually stuck at the emotional level of petulant and entitled 10-year-olds.

New figures reveal that three of the biggest forums frequented by those who support the woman-hating ideology are pulling in half a million clicks from United Kingdom visitors each month, and radicalised “Incels” goad others to commit mass shootings in a kind of extended tantrum.

Right now, in the UK, we are coming to terms with the so-called “Incel sympathiser” who shot his mother and four other random people in the sleepy town of Plymouth in the South of England. His social media was full of writing about how much of a failure he felt and the extent to which he blamed women for that.

What a tragedy it is that so many men sabotage themselves so effectively in the pursuit of an impossible and unnecessary reassurance that they are “man enough.”

It’s as if they feel themselves to be looking in on a wonderful party from which they’ve been excluded, which makes them so envious, fearful, and angry that all they want to do is destroy it. And yet, all they need to do to be welcomed in is to knock and ask.

The degree to which women are the victims of male violence is truly staggering. 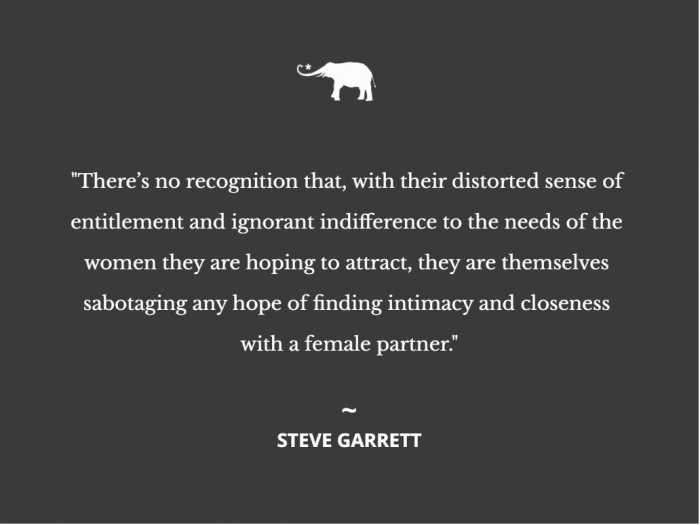 Women aged 15 to 44 worldwide are more likely to be killed or maimed because of male violence than because of war, cancer, malaria, and traffic accidents combined. Male violence against women is one of the invisible and under-recognised pandemics of our time.

To me, it is inexplicable that so little energy and money is put into trying to understand and prevent this.

If just a small percentage of the amount of money that is put into cancer research (not to undermine that, of course), for example, was invested in understanding the causes of male violence and how to prevent it, the number of lives saved would be at least as much as any medical interventions could ever achieve.

As well as prevention, there is an urgent need for psychological support, counselling, and support for men who are caught up in cycles of violence and self-sabotage.

We know a lot about adverse childhood experiences, complex post-traumatic stress disorder (CPTSD), and the numerous other ways in which a human spirit can be distorted into hatred for itself and for others.

We need to break the silence that makes men ashamed to speak up and share the doubts and fears that all of us have, especially in this age. Those fears may include getting a demanding job and working hard to provide for a family, which are no longer available to many young men.

Those men may express their existential vacuum of male identity with acts of violence and aggression and the attempted accumulation of power to prove to themselves and others that they are “man enough.”

We need to empower each man to choose his own path to meaning and fulfilment instead of violence.

Men’s drive to be strong, to be competent; to be a nurturing provider; to compete with each other in finding the best solutions to problems; to celebrate, court, and cherish women are all part of our inheritance.

It’s not human nature to hurt other people, so I suggest we postpone any more thoughts of sending rockets into space or spending millions on other vanity projects for at least a couple of years, and invest as much money as we can in solving this huge and historical problem that causes so much harm in the world.

Steve Garrett a.k.a. “Stainless” Steve, is a Wales-based writer, poet, and musician. He is passionate about gender equality, and has published four books of poetry… Read full bio