The Day I could’ve said No to Empathy but Chose to say Yes. 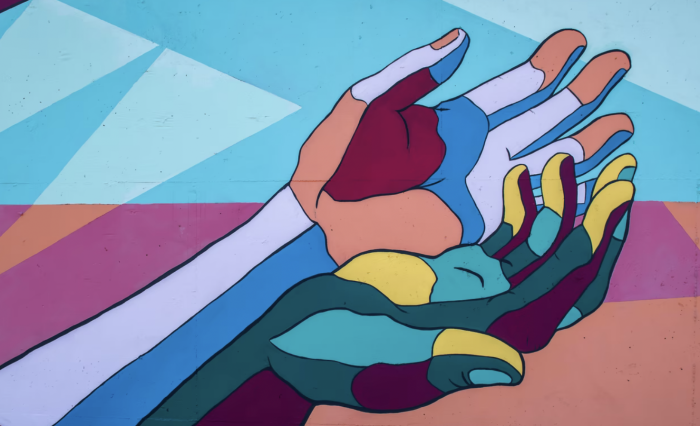 The line at the pharmacy was long, and I could see only one person, Donita, behind the counter.

As usual, her mask was well-placed on her face, every hair in place, and with just enough makeup to add to her professional appearance.

As she scurried about the pharmacy, I heard her voice increase in volume and noticed her talking to an elderly gentleman but he was having a hard time hearing her. Donita stepped back from the counter, briefly removed her mask, and told him, again, that his prescription wasn’t ready but that she’d get it done by closing time. 5:00 p.m. Turning away from the counter, the old guy slowly shuffled down an aisle. He now had an annoyed look on his face.

How well I knew the feeling.

My prescription pickup went quickly. They were all refills; no new drug consultation was necessary. Knowing Donita for several years, she exudes confidence, knowledge, and courtesy—the qualities one likes to have in a pharmacist. We hurried through the transaction with a bit of chitchat about the latest COVID-19 numbers and the (possible) pending doom of a wretched flu season. It was a hassle-free exchange of money for scripts, and I was out the door.

Leaving the pharmacy, I felt the sunny warmth of an early October Arizona day and a warm breeze gently lifting my hair. Without any low-hanging clouds, the Superstition Mountains were in clear view, splendid in their cascading lines of brick red, purple, silver, a hint of blues, and dark gray. These mountains never look the same to me—it all depends on how the light of day hits the peaks and low pitches of the gothic formations.

All was feeling right with the world, and my mind felt unusually carefree. As I continued toward my car, I heard the voice before I saw him.

“Ma’am, excuse me, Ma’am, would you have a couple of bucks to spare so I could get something to eat?”

The man continued rapidly talking, no doubt figuring he had a captive audience and wanted to be heard.

“I’m starving. I’ve not had anything to eat since yesterday.”

About 10 feet in front of me stood a guy, 40s, graying hair, baggy, faded jeans, and a gray, tattered sweatshirt with a dull Arizona State logo. His shaky right hand was placed on his sweatshirt, directly over his belly, as if to soothe the ache of emptiness.

Most panhandlers hit me up for money for gasoline, but this guy wanted food—and there was something about him that seemed authentic.

Before I could say anything, words kept rolling from his mouth. 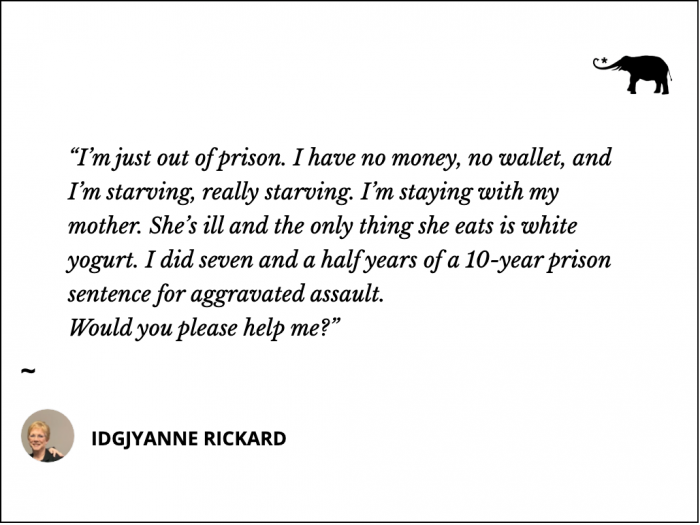 “I’m just out of prison. I have no money, no wallet, and I’m starving, really starving. I’m staying with my mother. She’s ill and the only thing she eats is white yogurt. I did seven and a half years of a 10-year prison sentence for aggravated assault. Would you please help me?”

I asked, “What prison were you in and what was your prison number?” The guy quickly rattled off eight numbers. I caught the first four.

“I was housed at the state prison, Ma’am.”

My 25-year health career in organ procurement had introduced me to many out-of-the-norm hospital settings. Having had a handful of state prison inmates as potential organ donors through the years, I asked what street the prison was on. The guy answered correctly: Wilmot Street. At my request, he repeated his prison number.

I told him I wouldn’t give him money, but I’d take him into the fast-food place and purchase food for him. He held the door for me, thanked me profusely, and we entered the restaurant. Before getting in line, the man turned to me.

“My name is Nathan. What’s your name?”

Without a pause, he continued.

“Gee, I wish I knew you better. I’m really good at fixing things. I can do carpentry, plumbing, and car repairs. I knew how to do lots of things before prison, but I learned many more things while in prison—at least it did some good.”

He snickered. I told him my name. He said he was pleased to meet me. But his words of being “a fixer of all things” spoke of gratitude for the gift I was giving; he was wishing he could somehow repay me.

Nathan was not a shallow man reduced to begging for money and food to stay alive. He was genuinely authentic, bright, and feeling. Nathan had a depth to him.

I saw him study the menu board, and he asked if he could get the three-taco dinner for just under four dollars.

I said, “Hey, now’s your chance to get whatever you want!”

He was thrilled and smiled from ear to ear. Yet, he quietly asked if he could get a platter item for 10 bucks. I told him to go for it, so he ordered the platter and a large drink.

I handed the clerk a crisp new 20-dollar bill. As the clerk was taking my money and Nathan was getting his drink, the clerk told me Nathan had been around asking for food for most of the day—but nobody would help him and the restaurant was not permitted to give away food to beggars.

As the receipt and change were placed into my hand, I turned and placed it all in Nathan’s hand.

He seemed to glow and excitedly said he’d also be able to get breakfast the following day.

As I turned to leave, having said goodbye to Nathan, I was surprised to see that a line had formed behind us. There stood several of the employees and a few customers who softly clapped their hands and said thank you over and over. I felt a bit uncomfortable and just nodded and smiled as I walked through the door, back to the Arizona sun and breeze.

Once inside my car, I replayed the last 10 minutes over and over in my head. I couldn’t believe what had just happened.

At least Nathan knew there was someone who heard his plight and responded positively to his pleading, without judgment. He knew that someone cared about him regardless of why he served seven and a half years in a state prison.

I cared. I knew he was hungry, and I believed his story.

As I pulled away from my parking spot, I noticed Nathan waving wildly through a window inside the restaurant. I waved back and smiled. It was a generous act of compassion for a mere 20 bucks.

I showed this man a measure of kindness he hadn’t expected and perhaps restored some of his faith in humanity.

It feels pretty darned good to make a stranger, a convicted felon, feel significant. I believe he was placed in my path at that precise time. The meeting benefited both of us. Perhaps it served as a lesson for those who witnessed the interaction between Nathan and me. Empathy, compassion, and generosity didn’t cost much, but the effect it’s having on me is priceless. I’m sure my fourth-grade Sunday school teacher would be proud!

And once again, all feels right with the world. 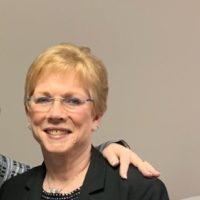 Peggy Rickard: Owner of a medical advocacy business assisting patients to navigate our complex healthcare systems.  It is imperative to obtain the best medical care to ensure… Read full bio