It’s Time to Unwind, Let Go & Separate Ourselves from this Past Year—For Good.

I know, it seems like we offer that same tried and true opinion just about every year, but it also seems like things have only been magnified since we moved on from the 2010s into the 2020s. As midnight struck on December 31st of last year, life looked a lot different for me as I found myself entering the final semester of my pre-university studies.

At that time, I was still unsure of where I stood, both artistically and academically, as I faced what I saw as an uncertain future ahead of me. Now, as we wait for the clocks to strike on December 31st, 2021, I can say that things worked out, even if there were numerous bumps, dips, dodges, and ducks along the way. While I would’ve liked to have found more time to document the insanity that has been 2021, interspersed between societal uncertainties and academic instabilities, I was unfortunately reminded of a fact I should be all too familiar with at this point.

Having writer’s block is the pits.

I know, not exactly a worldwide issue especially with the journey that seemingly lies ahead of us, but regardless, it’s something that I, for better or for worse, have had a firsthand experience with over the past few months, and yeah, it’s not fun for anyone who goes through it. Seemingly every word is on the tip of your tongue, every sentence sounds clunky and not at all natural, and anything you write (no matter the length) reads like complete and total garbage.

At least, that’s the way it can be perceived. After all, we’re only human, and we tend to be overly critical of our own work, even with others’ support and appreciation of the work we create—and this doesn’t just apply to writing. In fact, 2021 has seemed to encompass every aspect of our lives in one way or another, and it’s something I rather, unfortunately, haven’t been able to discuss or note down much due to, well, not being satisfied with any of it.

As I struggled to find the right words to say and grew frustrated with anything I wrote, I tried to reflect on this past year with the same ol’ nostalgic tones I’ve grown all too familiar with.

Over the past two years, a lot has changed in our world, and this is something I documented in bits and pieces back when I was working for my CEGEP’s student paper. At that time, I was an aspiring poet looking to become a screenwriter as I transferred from studying Psychology to studying Film. It was a drastic switch, but one I ultimately needed to make as I juggled failing grades with crumbling mental health. In the end, things worked out, but even as I sit here writing this—currently waiting for the start of 2022 and beyond—I still wonder if things truly did work out.

I think it goes without saying that this year hasn’t been easy for me and a lot of other people. The COVID-19 pandemic continues to impact the world with new variants and increasing cases, raising concerns for the whatever-number wave is next. The United States has become more and more like a traveling circus as it has been embroiled in numerous controversies related to race, women’s rights, and even the deeply rooted Roe V. Wade abortion laws, which are now in danger of being revoked by the very same women it was made to protect.

In other words, the real world kind of sucks right now, and it’s something that most of us never see coming. Keyword being see, not saw. I’m not here to sugarcoat things and say that just because this past year has sucked doesn’t mean life hasn’t sucked before—that just wouldn’t be true. This isn’t the first time people have gone through this same old song and dance, myself included, and I can’t even dance to begin with.

As my final semester in CEGEP drew to a close and I looked at what lay ahead of me, I knew things wouldn’t come easy in spite of everything that had gone right over the past three years. New school, new program, new people, new responsibilities, and my first glimpse at what you grown-ups call real life. And, it’s been awful, really awful, and no number of false praises can take away from that, both for me, and so, so many other people. University isn’t an easy transition even for those who are prepared for it, and the same can be said, sadly, for our current situation with the still ongoing Covid-19 pandemic.

As I threw out draft after draft trying to put down my thoughts on it all, 2021, the pandemic, and everything else in between, I slowly wallowed myself into a hole of illicit substances, long nights, and an overwhelming feeling that I had absolutely no clue what I was doing. It’s a terrifying thing for a lot of people to confront, and for the longest time, it was something I simply didn’t want to confront.

Turn to any self-help book or any inspiration YouTube video, and they’ll spit out the same tried and true, beating a dead horse-esque mantra, all pointing to the same idea of confronting and accepting that things aren’t okay. Yet, doing that very same thing can be terrifying, and it’s something I didn’t want to admit, nor head back to after escaping it during my early years in Psychology.

In spite of it all, I think the same can be said for so many issues we’re facing nowadays—whether it be the pandemic, or struggling to adapt to online school, or dealing with writer’s block, or heck, any issue you had to or are still facing as we reach the end of 2021, most of us, didn’t want to admit, nor return, to any of it.

Yet, just as someone goes to the grocery store to return that rotten batch of bananas, we find ourselves standing in that familiar cue, once again. Wearing the same masks, respecting the same distances, and continuing to adjust and adapt to this “new normal” we’ve been coming in and out of ever since we first discovered what the term Covid meant, and, on a larger scale, what 2021 meant.

This year wasn’t good for a lot of people, but in spite of it, we still need to take that time to unwind, let go, and separate ourselves (if ever briefly) from the struggles and uncertainties that defined this past year and look to be bleeding over into 2022 and beyond.

As you sit with your relatives, your family, your close friends, or heck, even just yourself—having to still bear in mind the restrictions, distancing, and curfews that we’ve all grown so fed up with—there’s little left to do but say goodbye to 2021, and hello to a fresh start in 2022.

Cheers, folks, and have a Happy New Year. 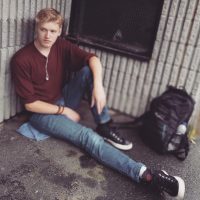 Scott Cowan is a writer, artist, journalist, and photographer from Montreal, losing the definition of forever. … Read full bio