Are you an Introvert, Extrovert or Ambivert? {Plus a Priceless Tip} 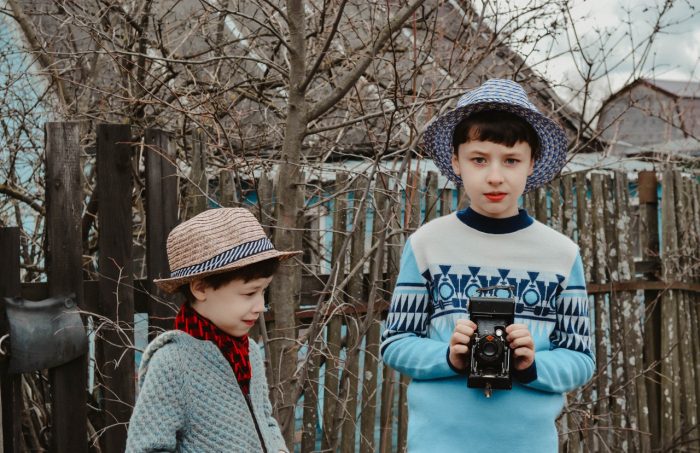 I’ve heard one or two of these adjectives throughout my life (okay, maybe most of them), and, growing up, I thought these descriptors were somewhat accurate.

I guess I thought they were somewhat accurate because of my then limited understanding of the uniqueness of each individual. Society teaches us that we should exist in a certain way or conform to the personality traits of the vast majority, for the most part. We are all different and unique, and that’s perfectly okay; I just didn’t know that then.

I think it also came in part from exposure to school life and the way in which sports was seen as the be-all and end-all. One was made to feel like less of a person if they never had the same interests as the vast majority. Sounds familiar?

Not that there’s anything wrong with sports. I took part in sports, but I never felt that unbridled enthusiasm to be so super competitive. That should be okay, but it was rarely seen as okay by gym teachers if you weren’t knee-deep fanatical about it. I simply liked sports for the sheer fun of it.

I loved ball hockey and badminton; soccer and volleyball were among my favourites. Again, sports activities are great for many reasons. It promotes physical activity, teamwork, comradery, for the most part, social interaction, and so forth, but it’s a big world, and I’m pretty sure there are other things out there as well.

To name a few, there are debate clubs, music, art studios, dance and yoga classes, writing, reading, volunteering, public speaking, and many other things that require and celebrate individuality and promote intellectual autonomy. These were never promoted in school with the same enthusiasm.

Raised here in the Western Hemisphere, we celebrate the rough and rowdy, the robust and outgoing, but rarely the quiet and reflective, or the creative and the individualistic. To quote Mrs. Cain again, “We favour the man of action over the man of contemplation.”

One of the things I find strange is not allowing people to just be themselves.

Each person falls somewhere along the introvert/extrovert scale. There is no ideal version of each. As the psychologist Carl Jung said, “There is no such thing as a pure introvert or extrovert. Such a person would be in a lunatic asylum.”

What many people don’t realize is that introverts are usually quite comfortable with less human contact than their extroverted counterparts. Not only do they not mind being alone more often, but in fact, they seek it out.

Their mind, body, and spirit crave it because they typically become overwhelmed rather quickly in group settings or when they have too much to do in a short period of time or when unrealistic demands are placed upon them. They begin to feel flawed, even broken.

It is no wonder that they feel this way, especially when they are used to society using the extrovert yardstick with which it measures them. They often then fail to measure up and are seen as “antisocial.” To exist like that for extended periods of time leaves them irritable, fussy, and drained, even to the point of feeling neurotic. Perhaps this is where the above adjectives start to come in to play. They often then seem serious and uptight.

Introverts are not a big fan of small talk. It’s not that they dislike people; it’s just that they prefer long conversations about meaningful things, and small talk just seems insincere. They like to swim in the deeper end of the conversation pool.

Now, that is not to say that being one way is better than the other. That’s simply not true. To simply define or identify ourselves as introvert or extrovert does a disservice to each I think. We are so much more than the way in which we respond to energy and stimulation. Both introverts and extroverts have a sprinkling of the other mingled within them to varying degrees. When the sprinkling is significant enough, then it balances out. This personality type is called an ambivert.

I often think that the ambivert has the best of both worlds and is often overlooked when study and discussion pop up, as it is the “extremes” that we tend to pay attention to. Wikipedia defines ambivert as the following: “An ambivert is moderately comfortable with groups and social interaction, but also relishes time alone, away from a crowd.”

Wikipedia defines extroversion as, “The act, state, or habit of being predominantly concerned with obtaining gratification from what is outside the self. Extroverts tend to enjoy human interactions and to be enthusiastic, talkative, assertive, and gregarious. Extroverts are energized and thrive off of being around other people,” and it defines introversion as, “The state of or tendency toward being wholly or predominantly concerned with and interested in one’s own mental life. Introverts are typically more reserved or reflective. Introverts prefer minimal stimulation from their environment.”

The key word here is “prefer.” It doesn’t mean we can’t step outside our respective comfort zones, and for an introvert, to have brief periods of extroversion. For the extrovert, because they prefer to draw on their environment for that much-needed stimulation, it doesn’t mean that they can’t or shouldn’t have moments of reclusiveness, reflection, and solitude. In fact, it is quite necessary, I believe, for each to explore and push themselves gently toward those “uncomfortable” zones and try new things.

We grow as individuals when we do this and break the defining labels that weigh us down. We can be so much more than what labels say we can. There are many generalizations out there about introverts and extroverts. We each have tendencies, but that’s all they are: a tendency to behave in a certain way. It doesn’t mean we can’t step outside that and have new and exciting experiences. By all means, we should.

Wherever you may fall along the introvert/extrovert spectrum, it is important to remember to honour and respect who you are as an individual. Labels can be fine for statistical analysis and data compilation, but they often have a way of polarizing us to extremes. It seems we put much more emphasis on polarizing ourselves than we do on simply enjoying ourselves, often to our own detriment.

Finally, I believe that understanding ourselves, which includes looking at our tendencies and inclinations along with our needs and wants, is one of the key components to happiness and self-acceptance. 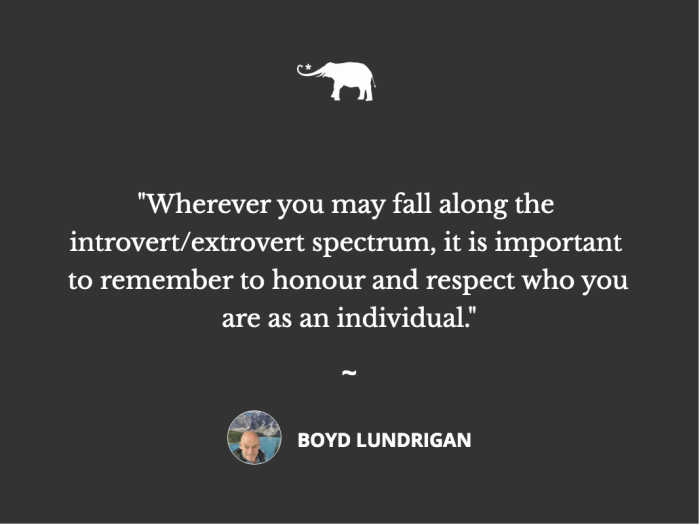 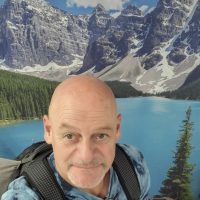 Boyd Lundrigan, a surveyor and safety representative, lives in Newfoundland, Canada and commutes to and from Alberta, Canada where he has been working for the past 15 years. H… Read full bio