All of America is a Crime Scene.

At least six people killed, 42 injured in mass shootings this past weekend across the U.S.

As of Monday, there have been 277 mass shootings in the U.S. this year, according to Gun Violence Archive. https://t.co/4zFiWe4uPo pic.twitter.com/Xs5IvGwJ6g

America has been in a perpetual state of ethical and moral crisis since its inception.

This country let the genie out of the bottle with the mass murder it utilized to pave the way to her perfect union. The slaughter and redistribution of Indigenous people on their land for the theft of their land was a start. Then came the millions of lives lost during the transatlantic slave trade—including the loss of life during 246 years of brutal chattel slavery.

These instances highlight the indifference and acceptance of mass casualties to further the imagery of freedom for all. Unfortunately, atrocities in the name of freedom continue to morph and manifest in this country. Mass shootings are just the latest iteration of permissible violence in the name of upholding an amendment over the lives of citizens.

The inaction of politicians desperate for money and power keeps our nation in the bondage of gun violence.

As a society, it shouldn’t be lost on us that some of the same politicians who plaster themselves across our televisions each time there is a mass shooting have received millions from the NRA. But this isn’t a piece meant to bash the NRA. We can’t expect our policymakers to make worthwhile changes to our gun policies if they have powerful lobbyists dangling the almighty dollar in their faces. Sadly, our elected officials are bargaining our safety away with the same lobbyists whose main objective is to make weapons more accessible.

How can a governing body enact meaningful gun reform when it continues to allow large financial donors to direct decisions that oppose the will of the people it represents?

Our lawmakers allow the likes of a deranged Sandy Hook denier, congresswoman Marjorie Taylor Greene, to have a seat at the table. Our political system is rife with representatives putting their own interests over the citizens who placed faith in them to uphold the promises of this union.

We are supposed to believe that the politicians who are bought and paid for by lobbyists—the lobbyists who are foolish conspiracy theorists and purveyors of alternate facts—will be the ones to save us from ourselves. Both political parties emotionally trigger their bases to distract from the lack of effort in addressing the non-gun-related root causes of the barbarity that is plaguing this nation.

The gaslighting of American society is breathtaking.

We are far too deep into our gun-loving ways to throw it in reverse.

While most registered voters want Congress to pass stricter gun laws, Congress will never do so because money will always speak louder than the cries of the people losing their loved ones to gun violence. Secondarily, staunch Second Amendment supporters would rather offer threats of killing or dying for their right to bear arms—in the face of those who actually die at the hand of that right, mind you—than contribute to the national conversation about the need for something to change concerning that right. We are a country of contradictions of oxymoronic proportions.

I am not calling for the government to take people’s guns away—as I stated, the cat is out of the bag on gun ownership in this country. I am a new gun owner and have a much better understanding of gun culture.

Although I can’t entirely agree with everything I have learned, I at least now have a much more informed opinion. I am not of the belief that responsible gun owners and enthusiast should not have access to the guns of their choice. But I am also not a fan of folks being able to purchase guns without some level of training before heading into the world with them—let alone an 18-year-old who generally does not possess the emotional intelligence to respect the responsibility of that weapon.

I value gun ownership as a right; however, immense harm can come from that right. Gun ownership should be handled with more reverence—and if that means more structure surrounding it, then so be it.

Despite this rant, I am not of the belief that guns are the only problem driving America’s predilection for violence.

Several social issues feed into the consistent leveling-up of violence that America has come to know and tolerate. We can start the list of social failures with the fan-favorite of mental health, the gutting of social services, poverty, disenfranchisement of voters, corporate greed, health disparities, racism—the list can go on. But we’d be remiss in neglecting our history. As a country just fine with mass murder, so long as those who utilize it champion the ideals of their forefathers birthing a great nation, the outrage toward gun violence is selective—and largely fleeting.

There is something incredibly unnerving about the frequency of mass shootings in this country. Something is sickening about politicians jumping in front of cameras to denounce gun violence, then publicly and privately pledging to uphold the Second Amendment, while simultaneously calling for the nation not to politicize these tragedies.

Something is disconcerting about society’s collective level of anger toward opposing sides over an issue no one truly knows how to correct.

The overwhelming desire to believe America is better than it used to be has been a mentally taxing venture all my life. I am exhausted by the state of this murderous union. We all should be. For a country obsessed with law and order, it sure proves selective about to whom and what that law and order applies. It certainly won’t be applied more thoroughly to adjusting access to weapons—and we should all be able to acknowledge that gun violence, in all its forms, is out of control.

We have politicians who work vigorously against the well-being of all citizens. We have more guns in this country than there are people. We want to arm our overworked, underpaid teachers. We expect good guys with guns to stop bad guys with guns, when, statistically, they rarely do. We have a large swath of Americans who care more about their right to own a gun than the sum of the violent acts committed by them.

It is all complicated. Multiple databases don’t even agree on the definition of a mass shooting. We love our guns. Innocent people are dying, in masse, near daily. Our government representatives tout their thoughts and prayers with no tangible action to remedy any of the problems. We all become outraged—then numb. Nothing happens. Around and around and around we go.

The American government’s inaction on gun reform is guilty of each of these crimes against humanity. Until they start agreeing on and addressing the root causes of this country’s affliction of violence, innocent people will continue to suffer. The more things change, the more they stay the same, and it is as it has been at the foundation of this nation.

All of America is a crime scene, valuing the motive and murder weapon more than the victims. 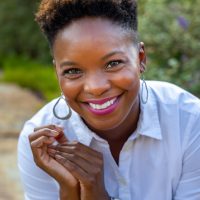 Patrice Nye is just a woman navigating life, trying to find her purpose through writing about how confidently lost she is. She is a compliance consultant by trade, runner, foo… Read full bio