Aid for Japan One Asana at a Time

Since March 11, 2011 the world has been reeling from the devastation and destruction caused by the earthquakes, tsunami and potential nuclear threat in Japan.

I lived in Japan during the Great Hanshin earthquake in 1995. I remember waking up that morning to a moving home even though we were 3 hours away from the epicentre. Three months later we visited Kobe. I was amazed at the many buildings, highways & other infrastructure that was in ruins. We spent one memorable afternoon with a group of 250 orphans of the quake playing games, singing songs and having fun, trying to bring some joy and laughter back into their world. It was a heart wrenching and humbling experience.

Prompted by those memories, concerns for my many friends who currently reside in Japan and in an effort to provide aid to those in need at this time, I developed a Japan inspired kids/family yoga class. I will be offering this class during lunch hours at schools throughout Edmonton, Alberta on a donation basis. All donations will then be sent to the Red Cross for use in Japan.

I post the class here to encourage others to do something similar. I know that Next Generation Yoga is leading a donation based class at New World Leadership Children’s Academy in Encinitas, CA on March 18th, 2011. Together we can provide an outlet for children to offer meaningful, positive aid which will hopefully help heal and relieve the suffering in some small way those affected by these disasters.

I suggest printing photos to correspond with each pose which will help those unfamiliar with Japan and then having participants choose them at random.

At 3776 m/12,389 ft Mount Fuji, known as Fuji-san in Japan, is the highest mountain in Japan and is located 100 km/60 miles SW of Tokyo. You can seen from there on a clear day. An exceptionally symmetrical, dormant volcano which hundreds of thousands of sightseers and climbers visit each year. A popular Japanese saying suggests anyone is a fool not to climb Mount Fuji once – but a fool to do it twice. The mountain is considered a sacred site.

Term used to describe the Japanese nobility of pre-industrial Japan particularly the warrior class. They followed a set of rules/code of conduct called the Bushido, the way of the warrior, which included loyalty, honor, obedience, duty and self-sacrifice. If a samurai behaved dishonorably the only way to regain their honor was through seppuku (ritual suicide), considered an admirable, deed of bravery.

Yabusame (Archers on Horseback) – horse stance with archer arms, alternatively have adults become the horses and children the archers

A type of mounted archery which dates from the Kamarkura period (1185-1333) and today is considered a ritual, not a sport, due to its solemn style and religious aspects. A yabusame archer gallops down a 255 m track controlling his horse with his knees while shooting three arrows at targets along the way which represent attacking samurai. The bow is a symbol of power and authority in Japan.

The symbol of Children’s Day( Kodomo no hi, celebrated on the 5th day of the 5th month – May5th, and is part of the Golden Week celebrations) these carp shaped streamers can be found flying above homes with sons. The black & biggest carp represents the father, the next biggest and red the mother, subsequent carp vary in color and size with blue for first son, then green, purple, orange in smaller sizes for subsequent sons.

Known as Sakura, cherry blossoms are a symbol of good fortune and represent impermanence and mortality (mono no aware) due to their extreme beauty and quick death. Hanami is a centuries old practice of picnicing under a canopy of delicate, pink sakura in full bloom and is enjoyed with coworkers, classmates, friends and family. This past Tuesday one of my husband’s friends sent a photo from Tokyo of  the sakura in bloom commenting on their inspiring beauty amid these trying times.

A fictional character of Japanese pop culture developed by Sanrio which can be found on all sorts of consumer products ranging from school supplies to fashion accessories. You can even get a Hello Kitty Mastercard, toaster, computer accesories and Fender guitar. Introduced in the 70s, today Hello Kitty is extremely popular worldwide with pre-school to adults females with a nearly cult like following in Asia.

Sushi is a Japanese dish made of seasoned rice topped with seafood and other ingredients. Sushi rolls, makizushi, are when sushi is wrapped around or inside of nori (dried, pressed seaweed). There are a number of varieties including futomaki (thick rolls) with multiple fillings, hosomake (thin rolls) with one filling, temaki (hand rolls) a cone shaped roll eaten with the hands, and uramaki (inside out rolls) where rice is on the outside. Popular fillings include cucumber, carrot, tuna, salmon, crab, and avocado.

Shinto, Way of the Gods,  is the indigeous spirituality of Japan and teaches that everything has a kami or spirit. Certain places are considered to have an unusally sacred spirit about them and are often near or on shine grounds which are treated with the upmost respect. One or more torii (literally bird perch) mark the entrance to the shrine and symbolize the transition from the profane to the sacred.

Cell Phones – talk on your foot phone – bring foot to your ear, text, etc. remember to answer both phones

In Japan cell phones are called keitai denwa (portable phone) or simply keitai. Much of the Japanese population own a cell phone to the point where they are ubiquitous with Japanese modern life. There is even a” keitai (mobile phone) culture.” Many Japanese phones offer additional capabitilites and the latest technology. Phone charms and stickers are a popular way of individualizing your cell phone.

Honda – drive your car forward & back on your mat by sitting with your legs in front of you and scooting along on your sitz bones one side at a time, or boat pose, navasana, with steering actions & turns (twists)

Shinkansen (Bullet Train) – sit class participants one in front of the other, legs out on each side, knees bent, inch forward in unison while making ‘choo-choo’ sounds (not exactly a ‘bullet’ but lots of fun)

Shinkansen refers to a network of high-speed railway lines and trains which connect major centres on the islands of Honshu and Kyushu. The Tokaido Shinkansen was built in time for the Tokyo Olympics in 1964 and is the oldest and busiest Shinkansen line in the world with over 151 million passengers a year. Shinkansen trains travel at speeds up to 300 km/h (186 mph).

Alternatively you could relate the story of Momotaro (The Peach Boy), a much loved Japanese folk tale, and use yoga poses for the various characters.

If you want a craft you could make Origami Cranes or Koinobori (Koi Fish Kite).

For additional ideas on helping children cope with the tragedies in Japan please visit Japanese Tsunami Folk tale to Tell in this Time of Tragedy on the Storytime Yoga Blog. 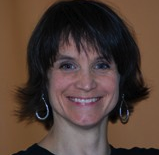 Teacher, author and expert on yoga for kids and teens, Donna Freeman firmly believes that yoga can be done anywhere, by anyone, at anytime. She grew up in British Columbia, … Read full bio