Finding Joy in a Culture of Inconvenience. 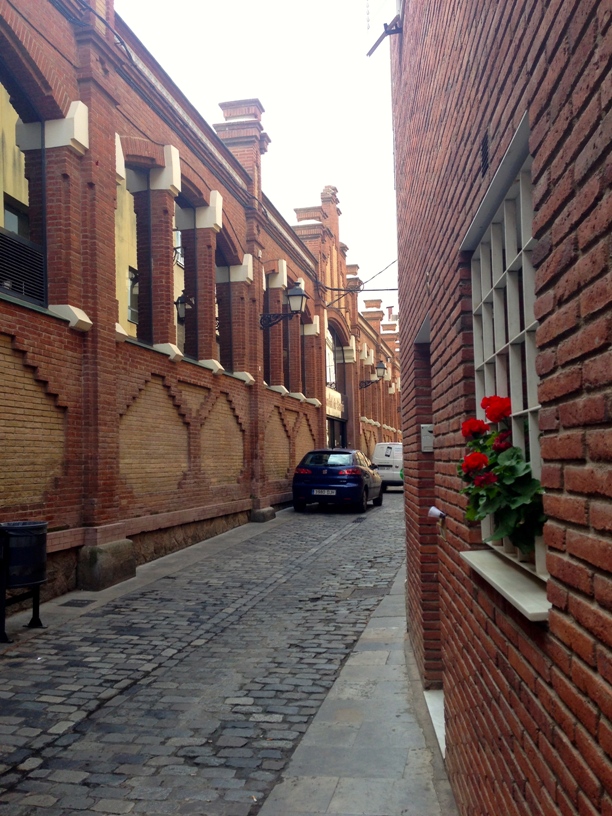 It is at least 90 degrees Fahrenheit and the humidity hangs over us like a hot, wet blanket.

My two children and I make our way down the narrow streets from the barrio of which we have been residents for less than 24 hours.

“If we were still in California, we would have just gotten in our car and been at Whole Foods in five minutes,” Siena, my fiery nine-year old unapologetically complains.

“Yeah, and the GPS lady would have told us exactly how to get there,” Max my 11-year old chimes in. He doesn’t like being lost.

“And we would have had air-conditioning in the car,” Siena continues haughtily.

I grunt a bit irritably at my children’s lack of enthusiasm for this adventure. We knew living in Spain would be challenging, but I was hoping for more in the positive attitude department.

I scowl at my smartphone map of the city, trying in vain to figure out the name of the street we’re walking on.

“Mom, look! It’s the Iberian Marbled White!” Siena stops for a moment enamored by this diminutive butterfly, delicately shaded in charcoal. She has always been obsessed with butterflies and has an almost encyclopedic knowledge of them. Siena then sticks out her index finger, hoping it might land there.

Max is following several steps behind, obsessed with the century-old sidewalk tiles that erratically provide for a narrow sidewalk. I am quite sure he is counting his steps.

I secretly hope that by living abroad he will find a reason to glance up and take in his surroundings.

This is one of the many reasons we moved nearly 6,000 miles away from our home: we needed to leave the culture of convenience, because it was cultivating a sense of complacency in all aspects of our lives. That culture no longer made sense to us, taking a grand leap of faith that an European culture might offer a more inherent sense of mindfulness.

As we make our next turn, we suddenly find ourselves in the quaint neighboring barrio of Sarria. It was once its own village, but as the centuries progressed, it was quickly overtaken by the urban sprawl as Barcelona expanded. Still, it maintains a charm and style distinctly its own.

My phone beeps, indicating that we have arrived at our destination, the neighborhood supermarket.

I show Max the screen of my phone. “Just for the record, our life here is not completely without all the conveniences of the States.”

But upon closer look at this ancient brick building, I decide it more resembles a jail than a supermarket and begin to doubt what I just said. I peer down the Mejor de Sarria (Main Street), and see no other visible signs of a shiny, mega-market. There is actually no signage for anything.

“Mom, look here,” Max points to a glass door with a subtle logo for The Mercat de Sarria.

“We’re here at the meerkat ” Max starts laughing hysterically at the thought that what is supposedly a supermarket could sound so similar to a South African mongoose.

I smile when he turns his gaze to me, which is rare as he prefers to avoid eye contact.

We enter the market, and then pause, taking it all in.

There are no shopping carts, nor isles of food products organized as condiments or a cereals. Nor are there any cashiers mechanically running merchandise through electronic coders and robotically placing the items into plastic bags.

Instead, there are brightly lit stalls, which at first glance, seem to be organized by the type of food that they sell.

People are packed in like sardines, each vying to get the attention of the proprietor by other means—such as knowing them personally.

But who, in this day and age, actually knows the person who sells them meats or vegetables?

I am not only intimated by not recognizing the varietals of cheeses, but coming from the US, in which almost all products are conveniently pre-packaged, pre-labeled and pre-priced, I don’t quite know where to start.

The next stalls are all fresh fruits and vegetables in which each piece of produce is exhibited as if it were in an art exhibit.

“Mom, can we get some strawberries?” Siena is drooling at them.

I am eyeing them too. They are gloriously beautiful in a most authentic way.

The female proprietor behind the stall smiles and makes a hand gesture for us to take a sample. We nod and each try one. They are even more delicious than they look.

Just as I am about to purchase some, using my limited Spanish vocabulary dating back to high school, another woman jumps in front of me. I am now feeling defeated, not because I lost my space in line, but because the woman who took it is conversing in Catalan.

Catalan is essentially the language from which Spanish evolved: (Latin around the 9th century). However, the Francoist dictatorship (1939 to 1975) banned the language. Since the Spanish transition to democracy (1975 to 1982), Catalan has been recognized as an official language—the language of education, and of mass media, all of which have contributed to its increased prestige.

Next we pass the meat stalls in which not a single part of the animal goes to waste. I wonder what one does with an entire pig’s head?

Now in the seafood stalls, the fish are so fresh you can almost see their bodies wiggle. It is here that the accumulation smells seem to collide in a way that is not so agreeable. 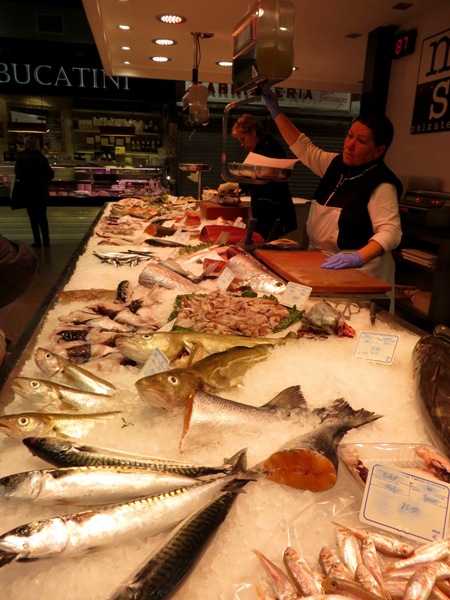 She is sitting alongside Max who has just vomited in the isle. It is clear he attempted to make it to the door, but with no such luck. Thankfully, an attendant is quickly at his side with mop and bucket. My guess is that this is not the first time that this has happened. I help Max gently outside to a bench for fresh air and color begins to return to Max’s face.

I notice that people are starting to leaving the market in large numbers.

The sounds of church bells ring twice, signaling that it is two o’clock, and in turn, the stalls turn off their lights–and close.

I ask a young man exiting the market, “¿Que pasa?” (What is going on?)

La siesta? The siesta in which everyone naps in the middle of the day? Didn’t that disappear at the turn of the century? As we get up, I then notice the bustling café tables in the Sarria Square filled with those enjoying lunch.

In a bold move, I sit us down at an open table. With a matronly intent, I decide that even though we may not be returning home with groceries, we are not going to return home hungry. We do our best to order off the Catalan menu by pointing at things, and otherwise using our limited Spanish vocabulary. I notice that some Catalan words are the same in Spanish, thus, also giving me hope.

In exchange for my life now being a little less convenient and completely unproductive, I have the gift of time, of being more present in the now, which is sitting with my children who are in awe of the chicken croquets, jamon (ham) and anchoas (olives) in front of them.

There exist simple joys in a life less convenient.

As if the universe has just heard my thoughts, the skies open up and a downpour begins. Everyone around us runs to take cover, but we remain exactly where we are, and instead look up in awe, allowing ourselves to get soaked in one more minor inconvenience. 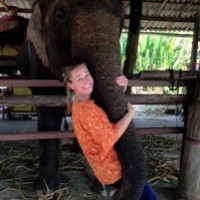