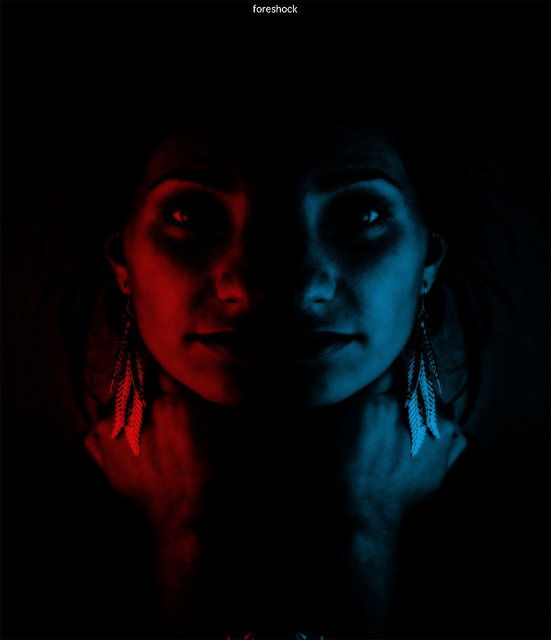 I spent years worrying about losing control of myself.

I divided myself into two: one was the the logical, rational, authoritarian part (the acceptable part) and the other was the unacceptable, animalistic, impulsive part of myself that “needed to be controlled;” The other a part—the controller—was a tyrant that kept me numb and disconnected me from the rich experience of life.

One day I realized that in order to be in control of myself, I would actually have to have a verifiable “self” to control—an objective me. So I went about trying to figure out what exactly this self is that I was so busy trying to control.

But every time I tried to put my finger on it, it evaded me.

I finally concluded that I can’t ultimately control myself, because I have no objective self to control. Realizing this cracked my experience of life wide open, and gave me access to a more blissful existence than my control freak could never have experienced.

So here are five proofs that there is no “you” that exists:

1) There is nothing true you can say about yourself.

In ultimate reality, there are only atoms moving. At this level, there is no smartness or stupidity. The entirety of our experience in this present tense moment is a vibration. The sounds we hear, the sensations we feel, the thoughts we think, the smells we smell. Even the beliefs that we have about ourselves are just a vibration in a dance with every other vibration in the universe.

What we think of as the self is not really a noun, but a verb. What I think of as “me” is really just a spontaneous dance of vibrations. Alan Watts explains that “the impression that there must be a doer where there is a doing is a grammatical rule, not a law of nature. Anything you can think of as a noun can be described as a verb. When you look for doers as distinct from deeds, you can’t find them.”

Indeed, I am not causing my thoughts to think, my nails to grow, my heart to beat. It is a doing. It is happening of itself. I am that doing, I am that verb, that spontaneous motion.

There is no separate me in control. I am the arising itself. I am the doing. The impression of a divergence between the controller and the controlled is an illusion created by the insane tendency of most human beings to want reality to be different than how it is. But reality, as it is in this moment, is all there can be. It’s one big doing. One big, universal happening. One huge verb.

3) Nothing you can observe about yourself is “you.”

In order to believe that a self exists, we must believe that we are some thing, with properties. But the thoughts that we think about ourselves are themselves just an object of our awareness. They are not us. Anything we witness is not us. We are the pure awareness in which the thought, feeling, sight, sound, sensation, belief, taste, or smell arises. Our experience is that of the universe interacting with itself. We are the witness to the spontaneous arising of the universe.

Nothing that we can observe can be what we are, because we are the subject and whatever we witness is the object. We ourselves are not objects. As Ken Wilber states, “You can feel bodily feelings, because you are not those feelings—you are the witness of those feelings. You can see thoughts float by, because you are not those thoughts, you are the witness of those thoughts.” This process of dis-identifying with the object of one’s attention is the practice of making subject into object until there is no more subject left, and all that remains is the vast spaciousness of ever-present awareness. In this spaciousness, there is no separate self.

By witnessing our subjective emotions, thoughts and sensations that comprise our experience moment to moment with non-attached equanimity, the Self that we normally identify with dissolves into objects of our awareness. The illusion that we have control over it is just another object of our awareness. The “controller” is not who we are. Here is an exercise to help you experientially realize this.

4) There is no clear boundary between where you begin and end.

To further illustrate the unsubstantial nature of the self, consider that there is no clear boundary between where anyone begins and ends. Some of the atoms in my body have electrons that exist ten miles away from me. I extend far beyond my skin. The functioning of my organism is entirely dependent upon the sun shining and the presence of oxygen, water, and plants. The sun shining is as much a part of me as is my heart beating. Alan Watts explains that “the individual is separate from his universal environment only in name. When this is not recognized, you have been fooled by your name. Confusing names with nature, you come to believe that having a separate name makes you a separate being.”

It is only a dualistic habit to believe that there is a self and an other, a doer and a doing, a cause and its effects. But cause cannot precede an effect, doer cannot precede doing when everything arises in unison. I cannot truly be the cause of something that is spontaneously arising in the moment with me. All that exists is this present moment. The past and future are only thought patterns in this present moment. Everything is simultaneously cause and effect. Reality is the central point where opposites merge into one. There is no you, no cause, no doer that is separable from the whole.

When we try to control ourselves, we split ourselves in two. We become controlled by the desire for control. We become divided against ourselves. We maintain the illusion of being a separate entity. We cut ourselves off from an experience of universal flow, of unity, of wholeness.

The only way to escape the illusion of control is to surrender to what is. To shift from controlling to allowing. To witness everything that is arising with pure awareness, and to not identify one’s self with any of it.

This does not mean we should not agree or disagree with anything. It just means that we are only truly free when we allow ourselves to accept reality as it is, accept ourselves—whatever that means—as we are. Because as Byron Katie says, “Any time you argue with reality, you lose.”

When we’re afraid of letting go of control, we cage ourselves in by an idea of what we are.

When we give up control, we allow ourselves to be the witness of the beautiful, spontaneous flowering of the universe as observed from our unique perspective.

Only then can we truly live in awe, in wonder.

Ultimately, there is no me.

And I can’t control a self that does not exist. Understanding this is freedom.