The Kind of Sexual Harassment We aren’t Talking About. 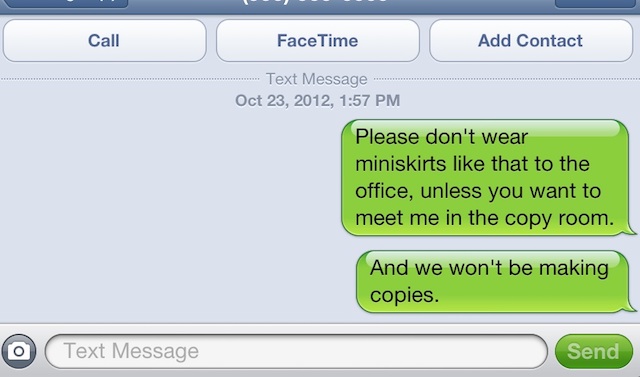 The Harvey Weinstein scandal has become not just a circus, but a sad, hard-to-watch, uncomfortable, and disheartening mess.

But out of every horrible event comes something good, and the one good thing coming out of all of this is it’s given women a voice. It’s empowered women to stand up for themselves and speak up.

I felt the need to speak up.

I am one of the lucky ones. I have never been raped, nor have I been sexually assaulted. Physically anyway.

Verbally, I have been the target of sexual harassment more times than I can count—and if I’m perfectly honest, until the whole Harvey Weinstein thing hit the press, I actually didn’t think much of it, because 1) I’ve been able to handle it and 2) It’s so common and so persistent in my life that I’ve accepted it as something I just have to live with.

I’m not living with it anymore. And hopefully by giving verbal sexual harassment some attention, other women out there won’t have to live with it either.

I just recently had a conversation with a male friend about the inappropriate text messages he sends me. He makes comments about my body and how if we were together, he’d do this and that to me. It’s all under the guise of, “It’s innocent! We’re just friends, and I’m just trying to make ya feel good.”

And listen, I appreciate it. Women appreciate a compliment. We like to hear we’re still sexy and can turn heads, especially once we’ve passed our prime, which nowadays seems to hover in the early 30s range. If you have a couple kids, which I do, getting the occasional validation from male friends or even strangers is fine if it’s done in a respectful way and with the intention of simply paying us a compliment.

When it’s given with the intention of being sexual, hoping to elicit some suggestive and encouraging words back from us, it feels objectifying, and it makes us uncomfortable.

This was not the first conversation I’ve had with this particular person. I’ve said the words, “It makes me uncomfortable when you make these comments to me,” more than once. He doesn’t get it. I honestly believe he means no harm, but he doesn’t hear me when I express how I feel. Which, if I’m honest, makes me do what most women end up doing in these situations—we throw up our hands and resign ourselves to the fact that this is going to keep happening to us, and we just need to deal with it.

Why the f*ck do we need to keep dealing with it?

I had a series of conversations with several women friends about this very thing over the course of the past few weeks. All of them have expressed their own frustration and anger over the verbal sexual harassment they receive, but feel they can’t do much about it other than ignore, smile sweetly, and walk away—or not respond to at all. I want to share some of the comments/text messages they’ve received just to give an idea about what women find inappropriate and uncomfortable:

“Hey! Send me a bikini shot from your vacay for me to add to my collection.”

“I’ve been staring at the hot picture you posted on Facebook last week in those booty shorts. Had quite the session last night with it if you know what I’m talking about!”

“I’d love to dress you up in all sorts of naughty Halloween outfits and do a photo shoot with you. Can I order some online for you?”

“Caught a peek of your panties in that meeting today. Was that a red or pink thong you were wearing?

These particular comments or messages are not from men these women are in relationships with. They’re from co-workers, male acquaintances, and one from a guy a friend of mine had just met on Bumble and knew for 15 minutes.

Many women don’t want to hurt the man’s feelings, so they just brush the comment off or don’t respond to the text message and move on quickly hoping it won’t happen again. I admit, wanting to always be the “nice girl,” I rarely if ever say anything, because when I have spoken up for myself these are the responses I’ve received:

“Oh, my God…I’m kidding! Don’t take it so seriously!” (My feeling: I’m overreacting)

“I’m just paying you a compliment. It’s not like I’m a dirty perv. I’m insulted you’d even say something about it to me.” (My feeling: Shame that I made someone feel bad)

“Fine, if you don’t want me to ever say anything nice to you, I won’t.” (My feeling: Guilt. Maybe I should retract what I said so they won’t be angry with me)

I don’t think we need to feel this way just for speaking our truth which is, “This makes me uncomfortable.” There’s a fine line between complimenting a woman and crossing the line where she feels you’re objectifying her. My friend Andy, who I consider to be one of the most respectful gentleman out there often says, “Would it be okay if I pay you a compliment, and I swear I’m not hitting on you…”

He does it in a way that’s light-hearted but genuine. He asks permission, and he states his intention which is that he’s not hitting on me, he’s simply paying me a compliment. And when men do this, we can receive it. If we don’t like what you have to say, that’s on us, and we can express that to you, but at the very least, we were asked permission.

I feel genuinely lucky I have never been put in the position so many women have where they’ve been unable to fight off a man’s sexual advances. I feel fortunate that my job never depended on me giving a blow job or sleeping my way to the top. My heart goes out to those women, and I’m so proud of the movement the Harvey Weinstein scandal has started and to see “Me too!” courageously posted on so many women’s Facebook walls.

Keep speaking up ladies. Find your voice. Let go of your shame, because it was never your fault. The more we speak up, the more we can change things for other women out there who are too afraid to come forward. Whether it’s physical, emotional, or verbal, we don’t need to endure being sexually harassed.

It can stop here with us.

You can Love them & Still Want to Have Sex with Other People.