A Picture is worth 1,000 Words—Except when they’re the Wrong Ones.

*Editor’s Note: Elephant Journal articles represent the personal views of the authors, and cannot possibly reflect Elephant Journal as a whole. Disagree with an Op-Ed or opinion? We’re happy to share your experience here.

They say a picture is worth a thousand words.

The question is, what are those words saying, and do they bear any resemblance to what is happening in the world?

Sometimes, those words ring empty in the face of reality.

One such picture recently circulated through the polluted airways of the media, showing a group of white high school students wearing Make America Great Again (MAGA) hats at the March For Life rally surrounding a Native American activist who was drumming in peace. 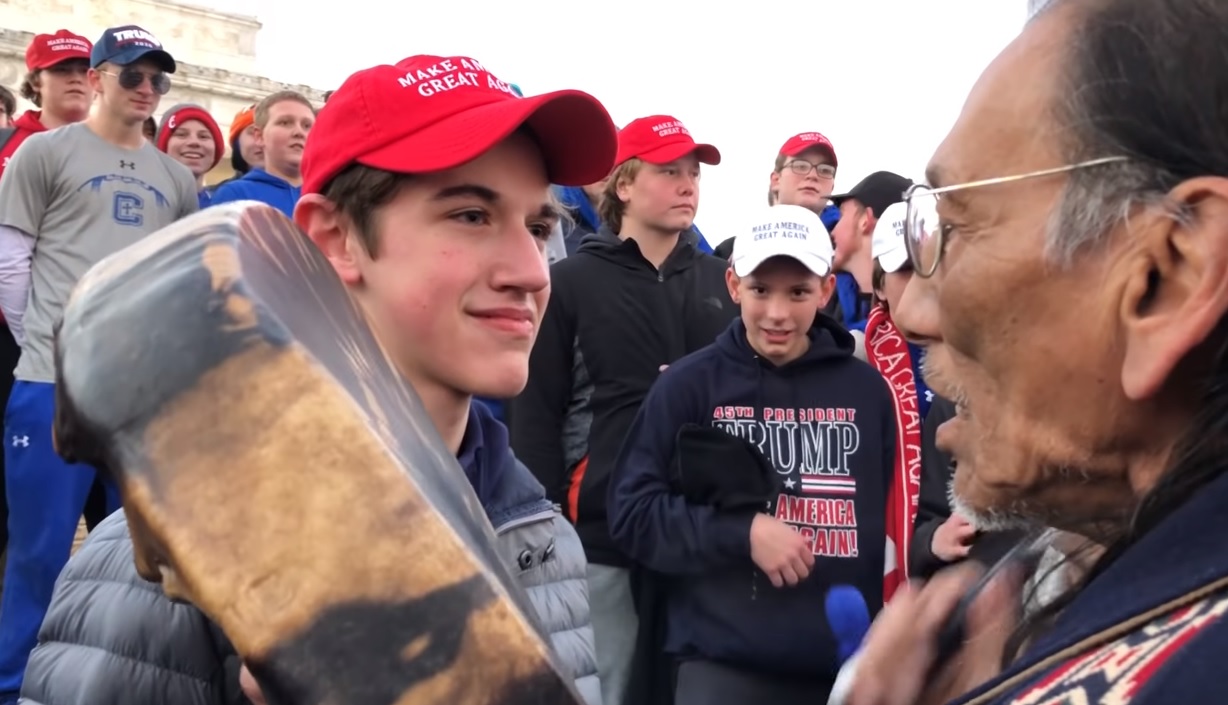 As it turns out, the picture was a dud, and the media reporting behind it was totally off base.

In the extended footage of the incident, drumming activist Nathan Phillips was shown to have approached the young boys while they were chanting their high school cheer, singling out the main boy whose face was shown in the picture without apparent provocation.

Before he approached, the boys were shown arguing with a small group of black Hebrew Israelites, who hurled out homophobic slurs at them while disparaging their “whiteness”—even going as far to single out a black boy in the group on racial grounds. As it goes, the truth is stranger than fiction, or rather, the truth is less convenient than fiction.

No one said "Build the Wall"
& if anything
That kid deserves a peace medal pic.twitter.com/lPbPtQtTh7

This is not to say the boys were innocent. I don’t care to defend them or paint a picture of their victimization, rather I’m alluding to the fact that the media misrepresented the events that occurred without even confirming the story. Clearly, the boys were being rowdy, though I wouldn’t expect much less from a group of high schools boys. Would you?

So, why did the media jump the gun?

This picture told a story about white privilege and the oppression of a marginalized group.

It represented, in caricatured precision, how the smugness of whites directly contributes to the marginalization of historically oppressed groups—embodying the narrative of identity politics to a tee.

The white kid was the hypothetical “oppressor,” and the Native American was hypothetically the “oppressed.”

It didn’t matter that the picture gave a false impression of reality. We don’t care about that. We care about confirming our already entrenched bias, and advancing the narrative that readily validates our political identity. Though, in this case, we missed the mark. Big time.

Human beings have always learned through telling stories. Our brains are designed to interpret the world through narrative, exemplified by such everyday occurrences as dreams, daydreams, religion, song, video games, and TV commercials, all of which tell a certain story.

We are all bound by narrative, but the question is, to what extent does our narrative coincide with the objective world? Oftentimes, not very much—and this is true more often than we’d like to admit.

The righteous indignation expressed in unified hatred of these kids, basically children, is indicative of the insidious devolution of political polarization in this country and elsewhere in the West—fueled by identity politics on both the left and the right.

Identity politics would have us believe that our racial, sexual, ethnic, and gender identity is the most important thing about who we are. It asserts we are a member of a group before all else, rather than an autonomous individual. In progressive identity politics in particular, each and every identity is stratified along a hierarchy of victimization and privilege—victimization being good and privilege being bad.

So, we will see a picture of a white kid seemingly grinning at a Native American, and because of this victim hierarchy, we will reflexively assign our vitriol, all of the bitterness and resentment built up inside of us from the tragedy of life, to the white person.

Of course, this reflex is not necessarily inappropriate in itself, for surely there are groups which are more marginalized than others and that trickles down to the individual. But if we refuse to question our narrative and doubt our assumptions, taking the media at face value (remember, media outlets can be profit machines just as much as Goldman Sachs or Monsanto, we become further and further removed from reality.

This comes with a fair amount of collateral damage, both personally and socially, as we become alienated both from ourselves and from our own country.

From a recently published article on the matter:

“As white and wealthy Christian young men confronted by an ageing person of color, the schoolboys were placed at an immediate disadvantage on a number of identitiarian fronts, so that it was evidently felt that their point of view could be presumptively and legitimately disregarded. So entrenched have such assumptions become in the nation’s finest progressive minds, that supposedly serious news outlets splashed headlines across their websites like ‘Boys in ‘Make America Great Again’ Hats Mob Native Elder at Indigenous Peoples March,’ with scant consideration for quaint notions like fairness or accuracy. And as a result of sunk costs and the incentive to save face, the odds of retractions—even in the face of compelling evidence—are slim.”

It seems like it is more acceptable than ever to trash our political opponents these days. Perhaps some of it is warranted. But is it helpful?

According to a recent Pew poll, more and more Americans residing on both ends of the political spectrum say it is more stressful than ever to talk to people on the other side of the political aisle. A significant chunk of both liberals and conservatives say the country would be better off if a large chunk of the other political party actually just straight up died. A bigger percentage of liberals and conservatives would disapprove of their child marrying a political opponent.

Worse still, we don’t seem to understand each other very well, as Democrats and Republicans are constantly over and underestimating the policy preferences of the other, as well as the size of various groups within the other party. Republicans guessed that 31.7 percent of Democrats were members of the LGBTQ community, while the actual number is 6.3 percent. Democrats guess that 38.2 percent of Republicans make over $200,000 a year, and the actual number is 2.2 percent.

So, we hate each other, yet we don’t even understand each other.

I don’t know why this is happening, exactly. Everyone has their own pseudo-scientific theories, and likely, the truth lies somewhere in between all the opposing conjectures.

One thing is clear to me: we can’t keep doing this. The narratives are moving further away from reality, as we are moving further and further apart. We are playing too much identity politics and we need to stop doing that. Moreover, labeling policy preferences “racist” increases support for these policies among whites and chastising Trump supporters for being politically incorrect makes them more likely to support Trump. This means that our efforts are backfiring and identity politics is not working.

Talk to people who disagree with you and read articles that espouse an unfamiliar narrative. Expose yourself. And lastly, if you get that surge of dopamine from engaging in a political hatefest, check yourself before you wreck yourself. If it feels that good, you probably shouldn’t be doing it.

A New Rosetta Stone of Consciousness From Ancient Egypt?