I sit in a cozy corner of an already bustling and trendy suburban Melbourne café, watching on as early-bird breakfast goers enjoy their smashed avo and lattes, while the sweaty, post-workout crew stroll in chatting about their latest lifts, followed by the football dad with his tribe of little footballers on their way to the game. Then come the dog walkers, the exhausted mum with two nagging kids hanging off her, the hungover group of not-so-chatty girls, and the late-for-work suited up man, all in desperate need of their coffee fix.

That is one thing we have in common the world over: our love of a perfectly brewed coffee. Just like we love the convenience of having someone make it for us and taking it to go as we get on with our busy day.

In one hour, I count the two baristas pouring from their colorfully tattooed hands 121 perfect beverages, with a hot coffee the clear winner on this crisp autumn morning. Of those 121 beverages, 53 were takeaway and only 4 were in reusable cups.

Let’s do the math. If we average that over an eight-hour day, we would be looking at around 390 throwaway cups. This particular café is open seven days a week, so in one week they could use up to 2,700 cups. And in one year that number could well exceed 140,000!

That’s just one café, in one town, in one city, in one country.

If only the reality of this issue would kick in faster than the caffeine does.

In Australia alone, it is estimated that over one billion disposable coffee cups are used every year. However, since an episode of the documentary “War on Waste” aired in 2017, highlighting the alarming number of disposable cups used and their damaging effects to our environment, the number of reusable cup purchases has indeed risen.

With an endless number of businesses manufacturing and selling reusable cups and cafés offering incentives (first coffee free with purchase of a reusable cup and/or up to 50 cents off each coffee when bringing your own cup), why do we still have such a serious issue with disposable coffee cups?

Where are all the reusable cups? And why don’t more people use them?

Recently, I was sitting in an average café when I caught sight of a lady walk in with her elderly mum. She gently sat her mum down, then made her way up to the counter to order. A few minutes after returning to her table, the waitress placed a coffee and a milkshake in front of them, both in takeaway cups. I expected the ladies to then get up and leave. They did not. They sat having a long chat and thoroughly enjoying their drinks. It was quite endearing to watch the sweet relationship between mother and daughter—until they got up and left, leaving the two cups to await their inevitable fate of ending up in a landfill for thousands of years to come or in the ocean, where they will break up into small pieces for our marine life to mistake as food, claiming countless lives.

Only to naively realise it is a much bigger issue than I had given thought.

The following week, as I entered my go-to café (Suburban Wholefoods) for my much loved almond milk iced latte, I saw a sign that read, “Hey, Suburbans! Here at the café, we aim to be as SUSTAINABLE as we can. So we kindly ask: If you are sitting in, please DON’T request a takeaway cup. If you have not finished your coffee as you leave, we are happy to accommodate.”

While waiting for my coffee, I struck up a conversation with the barista who was equally frustrated by the issue. “Last week alone, we had at least eight people ask for their coffee to come in a takeaway cup then sit down to drink it and leave it for us to throw away!” Suburban Wholefoods, as the name states, is a healthy, whole-foods café where a majority of the customers share their sustainable view and bring their own cups. But, unfortunately, they still have a lot who don’t and who don’t understand the issue with using takeaway cups.

Digging a little deeper into the coffee beans, I asked fellow caffeine enthusiasts why they don’t own a reusable cup or, if they do, why they don’t use it? The most common answers I got were convenience, forgetting to take them, laziness, cannot be bothered washing it, don’t care for them, can’t afford one, and, possibly the most surprising answer, “I prefer the taste in a takeaway cup.” One reason for this is companies capitalizing on the “keep cup” trend by having their branding printed on cheap plastic mugs.

I am now imagining a “Toy Story” situation in Tupperware drawers across the world, except, instead of toys, the sad, lonely, and forgotten reusable cups making friends with all those lost plastic lids.

I continued the conversation to ask if they thought about the environment when using a disposable cup. The most common answer was no. Some did, but only for a second. And some didn’t realise that most disposable cups were not actually recyclable (this is because of the thin plastic coating on the inside that makes them waterproof).

The reality of this issue is making me depresso! The fact is that people just don’t care enough or don’t prioritize it is as a “real” issue.

But what’s more inconvenient is not having a planet to live on!

Perhaps extreme is not the way to go. The scare tactic doesn’t seem to be working. People run away, with coffee in hand, from the extreme statistics. They change the channel, they turn the page, they keep scrolling. It is that easy not to see or hear anything that makes us uncomfortable.

So, how do we combat this growing issue?

Start a conversation. A simple conversation. Get people talking. Don’t mention the billions of coffee cups used every year or the affected marine life. To the average person, these are not measurable examples.

Make small changes—not using a lid, taking time to stop and smell the coffee, or finding a reusable cup you love and making it a habit.

Everyday life is a series of decisions; small changes add up to great change. So, let’s take it one cup at a time because, as the saying goes, “Better latte than never!” 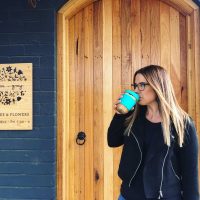 Nicole Parke, lover of sunrises, chaser of sunsets. She is most at peace while watching the first and last rays of the day. In between these times she a Beauty Therapist who r… Read full bio