What your Doctor Isn’t Telling you about your PMS Symptoms. {Partner} 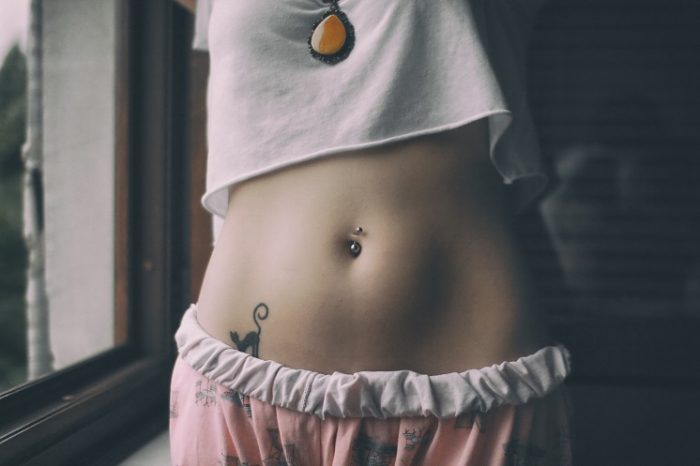 This article is written in collaboration with Jubilance—an Elephant Mindful Partner. They’re women on a mission to make PMS mood swings a thing of the past and we’re pretty sure you’re gonna love what they have to share with you. ~ ed.

“He might as well have given me a lollipop and a sticker.”

The doctor looked at me, blinked, then started scribbling on a prescription pad, muttering, ‘Without exploring hormonal solutions, this is your best bet. You can get it anywhere.’ By the time the prescription was in my hand, he was already on his way out the door. It read, ‘500 mg Ibuprofen — as needed, water, and rest.’ And then at the bottom, a smiley face and ‘Hope you feel better soon.’

I was upset, but not surprised. This was the third doctor I had visited for help with troubling pangs of anxiety and sudden, uncontrollable outbursts of tears and rage. My emotions went haywire in response to things that never bothered me before, and it was turning my life upside down. ~ Maria

Thousands of doctors like Maria’s continue to receive millions of patients reporting of a sharp and sudden increase in some combination of anxiety, sadness, anger, uncontrollable mood swings, and irritability that make normal life impossible.

Doctors are trained to treat these symptoms seriously. That is, unless the patient is a woman and the symptoms occur a week before her period. In that case, most will shrug their shoulders, feign sympathy and prescribe some combination of painkiller, exercise, and “deal with it.”

All sorts of cultural forces have worked hard to minimize the impact of PMS on a person’s life, link PMS to weakness, and keep it out of conversation (unless of course, it’s a punchline).

Enter Kathy Cash, a woman who stumbled on a discovery that has turned the scientific paradigm of PMS on its head.

Our story started with a mother, a daughter, and a monumental discovery that a man almost glossed over as “kind of interesting…but no big deal.”

Turns out, this discovery was a huge deal, and it led to a movement to make PMS mood swings a thing of the past.

Years before we founded Jubilance, Alan (a scientist and physicist) and his team of researchers invented a way to turn oxaloacetate (ox-a-lo-a-ce-tate), a lesser known compound found in some foods, into a capsule for use as a nutritional supplement. The compound had been studied since it was discovered in the 1930s, but scientists had never found a way to give it to people in measurable quantities like they do with other vitamins.

“At a checkup several months later, his patient told him that her emotional PMS symptoms had practically disappeared.”

Doctors loved the new oxaloacetate supplement and began recommending it to their patients for all sorts of different symptoms. Before we knew it, more than 5,000 doctors across the world were recommending it, scientists at a number of research universities were studying it, and Alan’s invention had enough interest to start a small family business.

One day, one of our doctor customers called to place another order for his patients. While I took down his information, he mentioned an interesting story. He told me that a few months ago, he gave oxaloacetate to one of his patients, an E.R. nurse for another medical reason, but she enthusiastically contacted him a month later to report that she had noticed a huge difference in her monthly PMS symptoms. 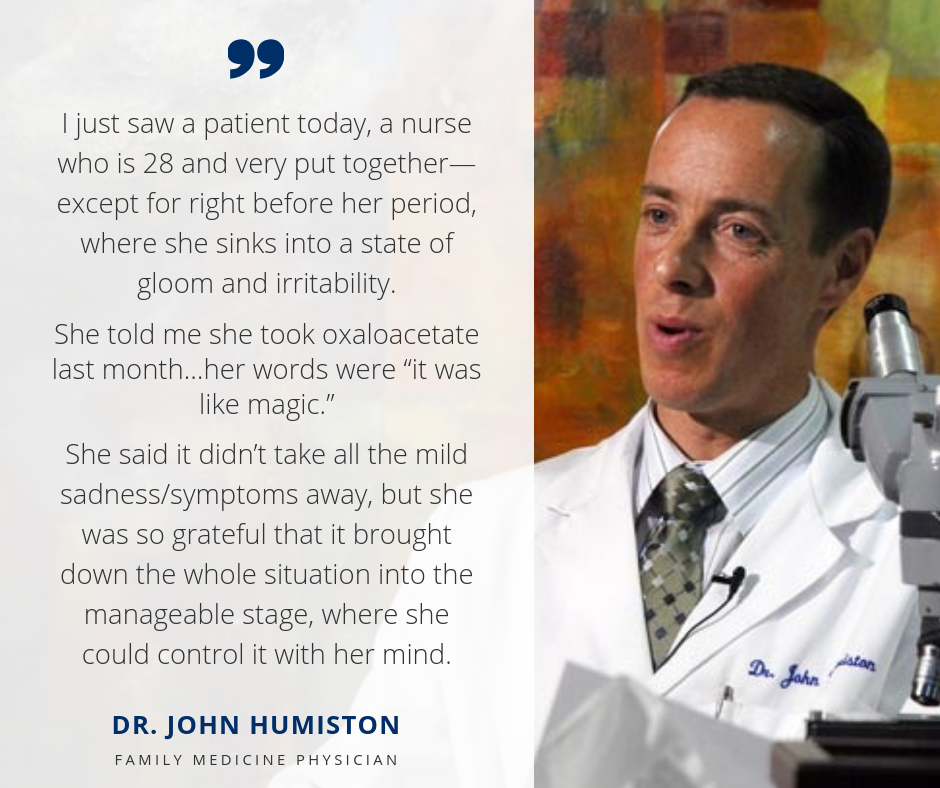 So, he started recommending it to any patient reporting PMS symptoms before he resorted to suggesting prescription medications. He kept hearing similar positive results. A couple months later, we received this email from him:

“Alan…I am up to almost 30 women treated for moody PMS…I have only had one failure.  Every other woman who has given me feedback has said that it substantially resolves the symptoms in a short time from taking the supplement…”

Alan passed the email on to me, with a simple message, “Hmmm…kind of interesting,” and went on with his day.

When I read that email, my whole world stopped. I knew this was something big…

To men, PMS mood swings might seem like they belong in the same category as an occasional headache or heartburn. I knew otherwise.

Nobody talks about it, but for many women, emotional PMS symptoms are a huge hurdle we have to climb every single month, just to get through daily life. Work, parenting, relationships, friendships, and even daily chores can become draining, almost insurmountable challenges when we’re struggling with PMS symptoms.

The first thing I did was mail a bottle of oxaloacetate supplements to my daughter Alice, who was in college at the time.

Since she had left home, we had received a series of phone calls from her at the same time each month. We could hear her distraught, sad, angry and suffering, asking us for help, but no words or anything we did would make her feel better. The email had made me realize Alice’s sporadic suffering may be related to PMS!

Lo and behold, the next time our daughter called, she had stories to share, grades to brag about, and sounded like herself again. We waited a month, and then another…fortunately the anxious, desperate voice never came back. Alice was herself again.

The biggest misunderstanding about PMS: hormones may not be the cause…

Doctors have said for years that the emotional symptoms of PMS, like anxiety, gloomy mood, stress, mood swings, anger and irritability, are due to shifting hormone levels before a period.

But a body of new scientific research indicates that while hormones play a role in the timing of Emotional PMS, they are not the only underlying cause of these symptoms.

In fact, recent studies show that women who experience severe PMS symptoms and those who experience no symptoms at all have no difference in hormone levels throughout the menstrual cycle. (Biggs, 2011). So, using birth control to alter hormones related to menstruation does not actually fix the underlying problem.

Emotional PMS symptoms are driven largely by changes in how glucose (sugar) is metabolized in the brain and how triglycerides (fats) are processed in the liver.

If you have ever had sugar cravings during PMS, you already instinctively know this.

Scientific studies that track glucose levels in the brain have shown that women with extreme PMS mood swings experience a much larger consumption of glucose in the cerebellum, directly before symptoms start.

The cerebellum lies in the lower part of the brain and plays a key role in emotional regulation, attention, regulating fear and pleasure responses.

The true answer to emotional PMS, however (sadly) does not lie in eating more ice cream and chocolate. While fueling a hungry cerebellum with a sugar and fat binge can provide real symptom relief to many women, it is only temporary. Once blood sugar crashes the cerebellum has even less energy than before, and symptoms return with a vengeance. 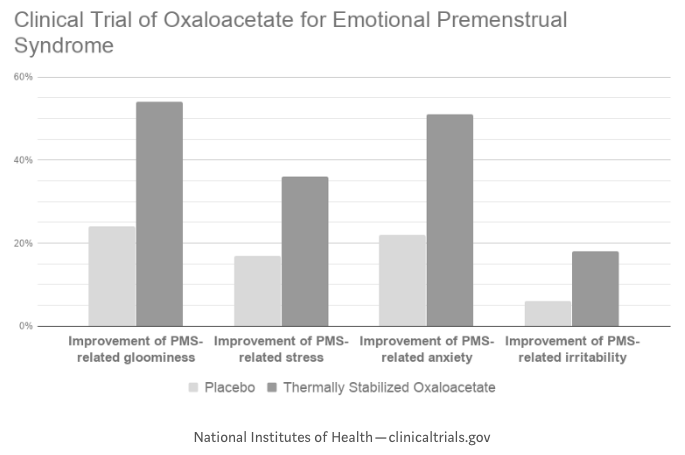 This ketone metabolite is necessary for gluconeogenesis and the Krebs cycle—in short, it’s how cells turn fats into glucose and glucose into energy. Normally, humans have enough oxaloacetate to get by, as it is found in trace amounts in food and can be produced by the body. Oxaloacetate is the cornerstone molecule for turning fats into glucose, and supplementing with oxaloacetate seemed to be the key to turning around emotional PMS symptoms.

As word spread and more doctors began recommending oxaloacetate for emotional PMS symptoms, we knew the next step was putting oxaloacetate to the test with hard science.

Women in both trials had the same life changing results she saw in her daughter Alice and heard about from doctors.

Based on the clinical trials, the testimonials from doctors and patients, and the understanding of the underlying mechanisms of PMS and how they are treated with oxaloacetate, the FDA has allowed the following “Structure/ Function” Claim which appears on every bottle of our oxaloacetate supplement. “Oxaloacetate may help alleviate the mild to moderate psychological and/or behavioral symptoms associated with Premenstrual Syndrome (PMS).”

Women on a mission to make PMS mood swings a thing of the past. 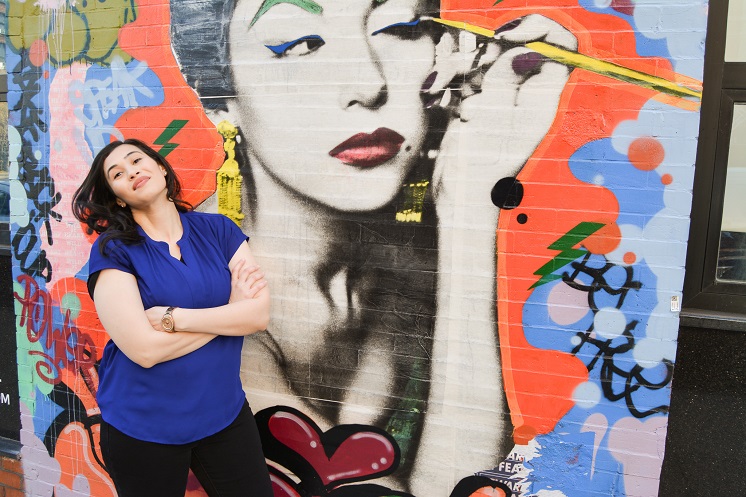 See if Jubilance will work for you: risk-free trial just for Elereaders>>

With the scientific backing of clinical trials, we were able to launch Jubilance, an oxaloacetate supplement to empower women to enjoy life as their best self all month long.

Since Jubilance is an over-the-counter supplement, anyone has the right to buy it online without a doctor’s “permission slip.”

Of course, if men had PMS, oxaloacetate would already be available at the counter of every 7-11. But for now, we’re just happy to offer women like us a clinically proven option without having to go through being dismissed by yet another doctor.

Since launching in 2018, more than 2,000 women have tried Jubilance. After trying their first bottle, more than 75% become monthly subscribers.

It may be just a small step forward in the span of medical science, but it’s a leap toward a world where an endless struggle with PMS is no longer an unchangeable part of life as a woman.

1/3
See for yourself if Jubilance is right for you with our Elephant Journal-exclusive trial offer. A bottle of Jubilance is $49 on Amazon. A monthly subscription costs only $42 a bottle. Through this page only, first-time customers can try the first bottle of a Jubilance subscription for just $19.95.
Grab this Elexclusive Offer.
< Previous Next >

Hello Carefree PMS, or your Money Back

2/3
Not sure yet if Jubilance is right for you? Try it, risk free. If Jubilance doesn’t work for you, just let us know and we’ll issue a full refund. No questions asked. No need to mail back the bottle.
Try Jubilance Today.
< Previous Next >

3. Help all your besties feel better!

3/3
If you love it, introduce a friend to Jubilance and when they subscribe to auto ship, you will both receive the book, "Fighting Emotional PMS and Winning," free. Plus, we’ll give you a free bottle of Jubilance ($49 value) for each friend who subscribes—and a $100 bonus when you reach 10 friends.
Outsmart PMS & Spread the Word.
< Previous Next >

The Exact Moment in my Marriage when I Stopped Being Everything to Everyone Else.

Pelvic Prolapse: What it is & How to Avoid it—Effortlessly. {Partner}