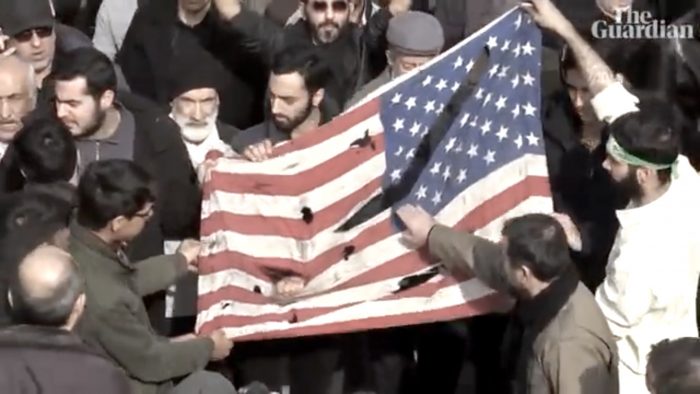 *Editor’s Note: Elephant Journal articles represent the personal views of the authors, and can not possibly reflect Elephant Journal as a whole. Disagree with an Op-Ed or opinion? We’re happy to share your experience here.
~

The assassination of Iran’s most powerful military leader, Qassem Soleimani, calls to mind the boss who yelled at the employee, who kicked the dog, who bit the mailman, who finally went postal.

Assassinating the most powerful military leader of a sovereign state is a major act of war for which any self-respecting nation will retaliate. However, killing the popular leader of a large army, with affiliated militias scattered across the region, which they have already helped destabilize, is an astonishingly reckless act of war. For it will infuriate militias over which the state of Iran possesses only limited control.

And there is no telling where the cycle of tit-for-tat reprisals it will unleash might end.

Iran may not be able to attack America directly, so they will likely attack its allies instead, who will retaliate in turn against civilians, living under the control of Iranian backed militias. This can be predicted because it is the normal course of reprisals that are unleashed by major acts of war. And in a region where state institutions have often lost control of their countries, this will unleash a cycle of tit-for-tat reprisals at the local level that could engulf the region in war—tribe against tribe, militia against militia, nation against nation, until the inferno draws in the remaining great powers.

A likely scenario might involve the Houthi rebels in Yemen launching an attack against Saudi oil refineries, for which the Saudis will attack in kind, thereby reigniting a long-simmering conflict, which has already left 18 million civilians on the brink of starvation. The end result could be millions of deaths at the hands of the British and American backed Saudis, who have blockaded and destroyed the Yemeni ports and transportation infrastructure needed for food distribution.

Another likely scenario might involve Iranian affiliated Hezbollah striking targets in Israel, for which Israel retaliates with attacks on Iranian nuclear facilities. Since the facilities are scattered across the country, and probably cannot be destroyed with conventional weapons, the danger is that Israel will launch a first strike nuclear war, a war their beleaguered prime minister Netanyahu has recently suggested might be necessary. But in a country of 80 million people, the death toll could be horrendous.

Iran can directly attack American troops in Syria or the American embassy in Iraq, but it would be difficult to strike so great a blow. So, it is likely that Iran will strike several targets at once—and they may mine the Persian Gulf in an effort to tank the global economy. Yet, whatever they do, it is likely to be big; and however they retaliate, Trump is likely to do so in kind.

In the end, several states across the Middle East—most notably Lebanon, Jordan, and Iraq—might collapse under the strain of war and its concomitant refugee flows. And while the ultimate shape of such a war is largely unpredictable, a likely scenario might involve America, Israel, Britain, France, Egypt, Saudi Arabia, and the United Arab Emirates pitted against Iran, Iraq, Syria, Hezbollah, Russia, and China, which supplies the arms.

Meanwhile, under the cover of international chaos, China can step up its genocide of Muslim Uyghurs, a million of which have been placed in concentration camps, while Han men are sent to rape the women left at home. Israel can commit genocide against Palestinian Gaza, where almost 10 thousand demonstrators have been shot since weekly protests began a couple of years ago on the border. India can begin placing Muslims in concentration camps in the state of Assam, where facilities have recently been constructed for almost two million people. And Bolsonaro can step up the genocide against Native Peoples of the Amazon, which itself might be razed at an even faster rate.

This is the way of war and it is all the more volatile for the madness of the man unleashing it.

The world has not seen a leader of a major power so erratic, hateful, irrational, and vane as is Trump since the time of Hitler. But this time he possesses nuclear weapons, as do other major powers like Israel and Russia, which might be drawn into the conflict. The idea that we can somehow predict and contain his responses is foolhardy; the idea that Iran will somehow stay their hand ignores everything history teaches us about the emotive volatility of the rush to war.

As it turned out, the most alarmist voices were the most measured, and the most extreme warnings the most accurate.

All of the worst-case scenarios were predictable, because when the most powerful man in the world is as authoritarian and hateful as Trump, all of his worst impulses will be normalized internationally. This means that allies and enemies alike will become far more brutal. Every time Trump praises another murderous dictator, the international society of tyrants hold another celebration over the terrors they can now unleash.

International peace is always more precarious than most people tend to think; the civility of would-be tyrants is always more constrained by norms and institutions than most people tend to imagine. Yet, Trump has not only normalized hate but overturned the moral order. The frail sense of security that comes with knowing that the good might flourish and the wicked suffer, which is seldom stable but ever-present in more civilized societies, is now gone.

The damage that might be done when the least virtuous icon in the world is the most powerful person in it is simply inestimable, for until recently it has been the stuff of myth.

Now there are many who would argue that Qassem Soleimani, along with Vladimir Putin and Bashar al-Assad, was responsible for the murder of hundreds of thousands of Syrian civilians, and therefore deserved to die. And they have a point: if the death penalty is ever justified, it is for genocidal leaders like Soleimani. And yet, military justice requires a delicate balance between punishing war criminals and keeping the peace. For the reprisals of war can seldom be contained, and the greatest price is usually paid by civilians. Moreover, if we were to assassinate everyone who is responsible for mass extermination these days, the list would run into the tens of millions and include several major heads of state.

And while the moral minimalism of holding genocidaires accountable may seem reasonable enough on the surface, war is if anything unpredictable. This is why cooler heads have long focused on the arduous work of strengthening the very international laws and norms that Trump is intent on breaking. Nevertheless, we can each play a part in bringing the rest back to reason; and we can each widen the conversation to include the full price likely to be paid in war. We can do so on the comment sections of news sites, on Twitter and Facebook, in letters to the editor and our own posts and personal communications.

Of course, it is quite possible this was not the first shot fired in the Third World War, but if that is the case, it will be in no small part a result of the actions of all those alarmists who communicated what it might actually involve; if we don’t go to war in short, it will be the result of a self-negating prophecy. If there is anything we have learned about Trump’s military brinkmanship it is that the initial enthusiasm for it tends to die down quickly as people consider the lunacy from which it emanates. It is now up to us to highlight it.

Theo Horesh, author of The Holocausts We All Deny.