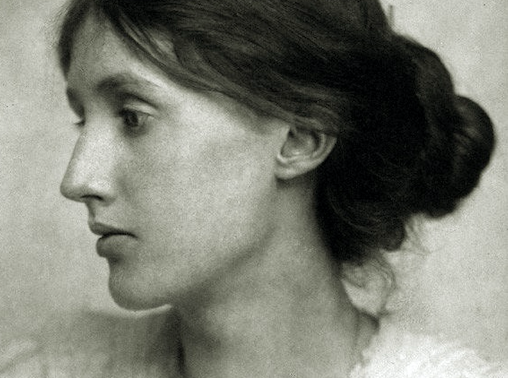 Isn’t it interesting how certain people come into our awareness?

My initial recollection of discovering Virginia Woolf was simply hearing her name. I thought, “What a magical name for a woman to embody!” Next, another fleeting connection, someone mentioned that she had led a tragic life.

“Nothing thicker than a knife’s blade separates happiness from melancholy.” ~ Virginia Woolf

She came to me in veils of drifting facts and opinions, some of my writer friends focused on her courage, others became fascinated by her sadness. I wanted more. More than the “occurrences” of her life.

“How much better is silence; the coffee cup, the table. How much better to sit by myself like the solitary sea-bird that opens its wings on the stake. Let me sit here forever with bare things, this coffee cup, this knife, this fork, things in themselves, myself being myself.” ~ Virginia Woolf

My favorite book about Virginia is one about her garden. It reveals a personal side shared with her husband, and where she had a room of her own.

“A woman must have money and a room of her own if she is to write fiction.” ~ Virginia Woolf

She also fascinated me because she loved a woman with great poignancy, and at times, I feel a fierce sisterhood as I too loved a woman, a garden, and live many hours in my room, writing out my heart.

Virginia was born in London in 1882 to a literary man and a woman who was known for her beauty, self-sacrifice, and cultural connections. It was a blended family, full of the usual tensions between half-siblings. Perhaps this was when Virginia’s struggle with melancholy began, solidified by the passing of her mother at age 13, and then followed by a succession of other family misfortunes.

She was of an inquisitive mind and an inherent talent, which I believe made her sadness tolerable. Ms. Woolf was a pioneer of writing styles, an early feminist, not only penning fiction, but foraying into the politics of power and artistic theory. She dared to be authentic and sovereign in her pursuit of truth.

“So long as you write what you wish to write, that is all that matters; and whether it matters for ages or only for hours, nobody can say. But to sacrifice a hair of the head of your vision, a shade of its colour, in deference to some Headmaster with a silver pot in his hand or to some professor with a measuring-rod up his sleeve, is the most abject treachery.” ~ Virginia Woolf

Because of Virginia’s determined stance on the power of words, and in particular, women writing those words, I was also propelled along my own path as an irreverent author. I only had to keep my focus on her place in the world at that time in history to understand her strength.

“Indeed, I would venture to guess that Anon, who wrote so many poems without signing them, was often a woman.”

“The history of men’s opposition to women’s emancipation is more interesting perhaps than the story of that emancipation itself.”

“As long as she thinks of a man, nobody objects to a woman thinking.”

I see humor and poignant intelligence in her quotes—a bravery to speak out and be heard. Perhaps her best years were in that garden at Monk’s House in Sussex, with her husband Leonard, also an author and publisher.

“Leonard and I have bought a field…and are making all sorts of ambitious schemes for terraces, gazebo’s, ponds, water lilies, fountains, carp, goldfish, statues of naked ladies and figureheads of battleships reflected in shadowy lakes.”

“Leonard’s garden has really been a miracle…such a blaze of dahlias that even today one feels lit up.” ~ Virginia Woolf

As I thumb through the pages of this most coveted book, I can feel the joy felt by these two whimsical humans as they strove to create a magical sanctuary. Sitting often in gardens of my own, I have turned my thoughts to what must have been a lot of work and also plenty of pleasure.

This is my favorite quote:

“I will go on adventuring, changing, opening my mind and my eyes, refusing to be stamped and stereotyped. The thing is to free one’s self: to let it find its dimensions, not be impeded.” ~ Virginia Woolf

These also make me stop, be still, and find perspective:

“I don’t believe in ageing. I believe in forever altering one’s aspect to the sun.”

Sometime around 1924, Virginia began an affair with the influential Vita Sackville-West. It was bold for those times, but not entirely unusual, though much more hidden than it would have been today.

“Like a little warm coal in my heart burns your saying that you miss me. I miss you oh so much. How much, you’ll never believe or know. At every moment of the day. It is painful but also rather pleasant, if you know what I mean. I mean, that it is good to have so keen and persistent a feeling about somebody. It is a sign of vitality.” ~ Vita Sackville-West in a letter to Virginia

“I like the unreality of your mind, the whole thing is splendid and voluptuous and absurd.” ~ Virginia to Vita

In 1931 Virginia gave a talk called “Professions for Women” and claimed that women’s absence from history was not due to their lack of talent or brains but to poverty. She understood inequality and repression, and urged women not to sacrifice themselves to men.

“Well, I really don’t advise a woman who wants to have things her own way to get married.” ~ Virginia Woolf

The role of depression in Virginia’s life cannot be undermined. She was often plagued by ideas of failure as a writer, a woman, and a wife, and this preceded a suicide attempt in 1913.

While she championed paradigm shifts in how society viewed the feminine and the masculine, by redefining gender roles and perceptions and fighting the patriarchy with her pen, she eventually succumbed to her fears of a violent, inarticulate world. Doubting her ability to cast adequate influence, she took her own life by wading into the river at Monk House with stones in her pockets and drowning.

“As I write, there rises somewhere in my head that queer and very pleasant sense of something which I want to write; my own point of view…” ~ Virginia Woolf

Many see the painful tragedy of Virginia’s death, but I also see a woman who lived life according to her own terms until the very end, which for her, was of her own choosing. She was brilliantly honest in how she felt and has left us with a template for living with integrity.

Often, I escape to her garden through my book of Monk’s House (which you should absolutely get if you like gardens or Virginia), and try to feel how she felt when in her writing room, marking her-story with her pen.

“I was in a queer mood, thinking myself very old: but now I am a woman again – as I always am when I write.” ~ Virginia Woolf

Major Works: Mrs. Dalloway, Orlando, To the Lighthouse, A Room of One’s Own, The Waves, Between the Acts.