Even Drinkers Agree: Alcohol is an “Essential” Problem. 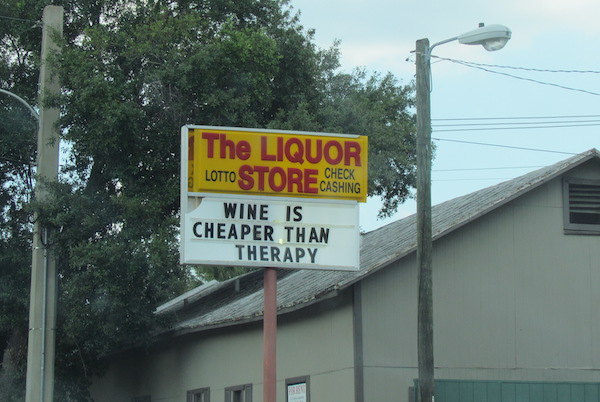 At the beginning of the pandemic, when businesses were being ordered to close and we were all being ordered inside, there was a minor uproar about liquor stores being deemed essential businesses and given permission to stay open.

I wrote about it. I talked about it on my Untoxicated Podcast. As I expected, it was a one-day news story forgotten in the overwhelming cycle of bad news.

But now, as we open back up, the issue keeps arising with a twist. Free market economy advocates are asking why liquor stores are allowed to be open while clothing stores and hair salons are required to still be closed. The owners of small businesses are asking why booze is more essential than their products.

Did you catch the quiet significance of what’s happening here? Drinkers are uniting against the essential designation of the stores where they buy their booze. Logic is prevailing. As someone who is trying to be among the leaders in a sobriety evolution, we have a new ally. A most unexpected ally.

The drinkers themselves are calling into question the necessity of their beloved alcohol.

You might think I’m making too much of a temporary distinction being made to serve a specific purpose. Maybe you think this is a really minor thing. Maybe you are right. But revolution doesn’t take place at a time of peace and harmony. It takes place amidst chaos when the rules are ripe for rewriting. If this isn’t a time of chaos that’s forcing everyone to reconsider their positions in an unwanted fight, nothing ever will be.

Listen, I get the essential designation for liquor stores for the small percentage of the population for whom sudden sobriety would be a medical danger leading to seizures or even death. But for most of the people who quietly applauded when booze was deemed necessary three months ago, their need was not a matter of life or death—it just felt that way. The idea of quarantine without their elixir to make it all numb and blurry was terrifying, but it wasn’t deadly. Not for most.

Social media is full of memes about drinking in quarantine. My favorite is, “Tough day at homeschool…two students were suspended for fighting and a teacher was fired for drinking on the job.” I have to admit, I laughed at that one, before I got pissed off that it was just another way to excuse and normalize day drinking. But in a way, maybe the memes that excuse the excessiveness are drawing attention to a growing problem that’s getting serious attention, too.

Even as we cross over 100,000 deaths in the United States from the virus, the other deadly dangers are getting increasing attention. Crushing the economy has ramifications that will likely dwarf the virus itself in significance. Death and despair from mental health and addiction are at the top of the list of worrisome topics getting news coverage. Thanks, in part, to the relentless supply of alcohol-centric memes, our population requires no convincing to believe the stories are true.

Everyone knows everyone is drinking too much. For once, if only temporarily, the normalization of excessive alcohol consumption doesn’t hide the problem, it highlights it. People sit in front of their TV with their fifth glass of wine for the day in hand, and listen to Anderson Cooper report on America’s dramatic drinking problem, and they believe it.

It’s too bad they can’t remember the next day, but hey, at least it’s a start.

When I write about a sober evolution, let me be clear about my goal. I’m not trying to take away anyone’s right to drink. We tried prohibition, and besides NASCAR and a bunch of good gangster movies, we didn’t really accomplish much. I’m far less into legislation than I am into education. We’ve got to tip the balance of popular perception through facts, insights, and shared stories. And for once, we’ve got a little momentum as people increasingly admit to worrying about their own drinking.

The sober evolution isn’t about restriction of freedoms. In fact, it’s about precisely the opposite. I don’t want to tell people what they can or cannot do; I want to make drinking a choice. For so many Americans, me included, drinking has never been an option; it’s been an obligation. My family taught me the importance of alcohol for celebration, mourning, stress relief, and relaxation.

In high school, alcohol lowered our inhibition, and in college, booze was the center of our universe. I never considered sobriety because I honestly didn’t know it was even a choice. As a college sophomore at one of the country’s most renowned party schools, I wasn’t a librarian, for heaven’s sake. I was a kid surrounded by other kids. We all drank. All of us.

My life is infinitely better in permanent sobriety than it was during decades of imperceivable alcoholic descent. If only I had known then what I know now, a few facts about my life would be just a tad different.

Let’s focus on college for a minute, since that’s when my drinking first went off the rails. My 2.99 graduating GPA would have been dangerously close to a 4.0, I would not have gained the “freshman 40,” and I would have gotten active in intramural sports and student government. Instead of propelling myself forward with the incredible opportunity I experienced for four years, I wasted a lot of time wasted.

I don’t want to take away anyone’s booze. I just want us to make booze nonessential. I want haircuts and summer dresses to be as important as a person’s right to poison himself. What’s so revolutionary about that?

Let me make a few clarifications before I stop yammering. That bit about NASCAR is true. You can Google it. Stock car racing evolved from moonshine running in the hills of North Carolina.

I know all librarians are not sober. It was a cheap shot that I regretted as soon as I typed it, but it fit stereotypically, so I left it in. And 13th graders are known to gain the “freshman 15,” not 40. I was a serious overachiever. And I accomplished it by Thanksgiving break.

If you’d like to learn more about my sober evolution, please read my free Guide to Early Sobriety.

Matt Salis lives in Denver, Colorado, with his wife and their four kids. He is a writer, a speaker, a high school soccer coach, an addiction survivor, and an enlightenment exp… Read full bio