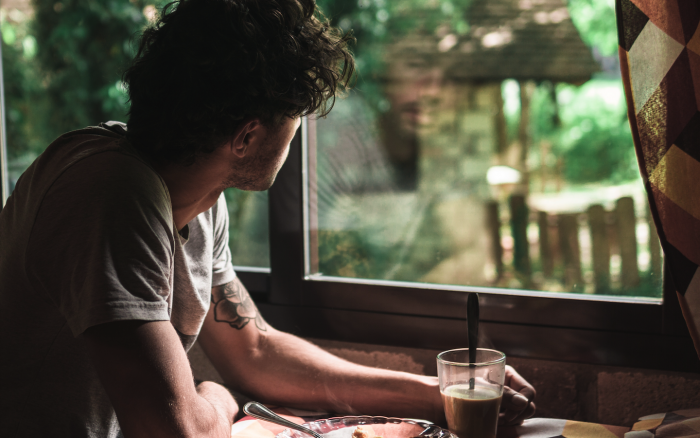 I’m not entirely sure what needs to happen in a person’s brain before they begin to get sentimental about the past—that is, when the past was a seemingly endless string of 12-step meetings in moldy church basements where generic coffee is served with clumpy generic creamer and dollar store cookies—but it recently happened to me.

Let us say, for argument’s sake, that it had to do with a lack of human connection. The pandemic shut down a lot of meetings, but there were still a few that were said to employ masks and social distancing and, because of these precautions, were given permission by the churches that they were renting space from to continue meeting.

Given that members freely removed their masks to shove cookies and coffee into their faces, read from the book, or talk to each other, these claims were somewhat dubious. Social distancing was also thrown by the wayside when people felt compelled to hug one another. I tried as hard as I could not to judge the others and just get something positive from the meeting to take away with me.

When it was my time to “share”—recovery parlance for speaking to the group—I had a lot to get out. Shortly after the initial lockdown, I briefly fell in love with a woman but that relationship ended in a spectacular fashion shortly after it began. It left me with a lot of unmanageable feelings, and I didn’t realize this at first, but I needed to get them out in the open.

When the meeting was over, someone I have known for close to a decade walked over to me and began to speak:

“Your problems all stem from the fact that you focus way too much on your ego. You know, ‘ego’ is an acronym for ‘edging God out.’ When you put your sexual needs over your relationship with your Higher Power, you will always wind up in sh*tty situations.

Now, had you decided to be of service to the still suffering alcoholic instead of a complete stranger, you would have saved yourself the heartache and, most likely, a sh*t ton of money. When you are a slave to your genitalia, you are usually rewarded in some strange ways.”

I listened to this diatribe and became increasingly annoyed. When I was newly sober, I used to buy into a lot of this crap—hook, line, and sinker. I’d come away from meetings feeling like I possessed these slick and quick diagnoses for the psychological hurdles I have struggled with since childhood. It was tempting to believe that all of my challenges could be defined and fixed with a set of theories put forth by a drunk and his doctor in the 1930s. Unfortunately, this is wishful thinking.

The veneration that long-time members of AA possess for “Bill W. and Dr. Bob,” the founders of AA, is undoubtedly cult-like. They are referred to almost as if they transcend the realm of mortality. It’s scary sometimes.

My experience with it has only led to a bit of disillusionment and annoyance, but things have changed so drastically in the world over the past five years that this stringent and inflexible program can potentially be more dangerous than annoying for people other than myself.

Allow me to explain.

There is a lot of oral tradition in 12-step recovery. Most of it springs forth from the almost century-old literature, but much like the American Constitution, it relies heavily on interpretation.

There is this belief that people will not seek change until they have experienced what the AA literature refers to as “the gift of desperation.” In other words, many purists feel that the idea is generally to allow people to hit rock bottom and then be there for them once they are ready to change.

This may have been viable at one time, but with the prevalence of the drug “fentanyl,” many people in need of recovery no longer have the opportunity to hit rock bottom and live to talk about it. This “tough love” attitude from Alcoholics Anonymous lost all of its credibility when opioid overdoses and deaths exploded over the past few years. A large majority of illicit drug users go to Alcoholics Anonymous and Narcotics Anonymous interchangeably, and both programs are, for all intents and purposes, quite similar.

A dear friend of mine who works in the social services in a small upstate New York county told me that they averaged 1.33 overdose deaths per month in 2019, 3.33 per month in 2020, and 8.5 a month so far in 2021. I am not entirely sure how that jives with the country at large, but it’s still quite telling.

The very idea that number one, we need to wait for people to hit bottom and, number two, 12-step programs are the only effective method to save lives are both dangerous and false. Science bears this out.

Luckily, these days we have what is now being referred to as the “Alt-Recovery Movement.” With this rampant epidemic, we can not rely solely on a program whose success rates, although never formally tracked, are largely believed to be well below 30 percent. This is probably due to the fact that not everyone wants to believe in God, that not everyone is comfortable calling themselves an alcoholic or an addict every single day, or believe they are powerless.

Many people also cannot abide by “total abstinence.” There are people whose only shot is what is called “MAT” or medication-assisted treatment. As I stated, the opioid epidemic is far too deadly and prevalent to just accept that not everyone is going to “get it.” If people aren’t “getting it,” it almost seems like the only humane thing would be to figure out why. Not just que será, será over the thousands of dead bodies.

I believe if we have opportunities to do better for these people, we should, at the very least, try.

Billy Manas is the author of “Kickass Recovery” a refreshing look at self development for people with substance use disorder. He is also a poet, singer-songwriter,… Read full bio