It’s Not a Math Problem; it’s a Violation: Why we need to Change our Language around “Rape.” 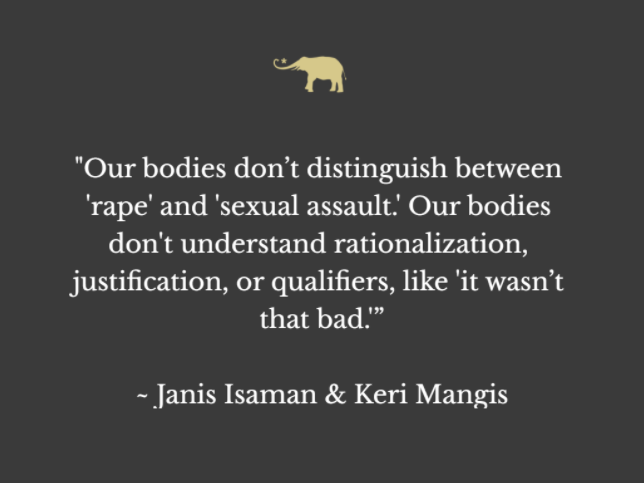 I couldn’t kick him or get away from him.

When he offered to walk me home after an evening out, the safe walk training I had taken suggested saying “yes” was logical.

Rather than escorting me to safety, as implied, he instead escorted me to trauma.

As he forced himself on me, and I shouted “No, no, no” until I nearly blacked out, he restrained one leg with his hand and held the other with his body. He pushed his hands and tongue into me.

He took away my agency, and I wasn’t strong enough to fight back.

The next morning, I concluded that I wouldn’t report him. According to the law as it was written back then, he didn’t technically “rape” me.

But he sure as f*k traumatized me.

The language we use to determine what is actionably harmful and wrong, and therefore punishable, includes a special category for rape. According to the United States Department of Justice:

“The penetration, no matter how slight, of the vagina or anus with any body part or object, or oral penetration by a sex organ of another person, without the consent of the victim.”

However, this definition was only updated in 2012. Prior to this, the definition of rape only included forced “penile penetration of the female vagina.”

While this new definition is broader and removes the delineation for genitalia specificity, it still doesn’t go far enough. It collapses all other abuses and violations under the label of “sexual assault“—leaving room for interpretation of those other crimes as a “step down” from rape.

As written, the tiers within the U.S. justice system currently require victims to distinguish assault by measures of harm, laying responsibility at the feet of the victim.

It’s time to abolish the nuance of rape and instead use the label of sexual assault for any violation of a person’s sexual sovereignty and will.

The day I took sex education classes in middle school and learned about rape, I lay in bed that night, imagining. My bedroom was in the basement, so I pictured a stranger coming in through the window, holding me down in the dark and forcing me to be quiet while he penetrated me.

And I remember thinking, “As long as I survive, it will be okay. It’s just my body, after all.”

It’s just my body. I really thought that. I was maybe 13 years old.

When thinking about rape, I pictured dark alleys, violent demands, and bruises left on my body. I never learned about or considered the assaults that happen at home, by a family member, by a man who’s been courting us, in quiet attics, or other violations of my body.

I thought about the “worst case” scenario: an ambush, a situation that statistically covers very few sexual assaults.

In my mind, anything that didn’t match that image wasn’t “rape”—which isn’t how my body felt about it later.

The Canadian Criminal Code has a specific provision for “sexual assault” that include both threats and physical contact. The word “rape” doesn’t exist, nor is there a specific delineation that assigns such nuance.

This is considered one of the strongest, most progressive penal codes presently available in the world.

Legal codes matter. And so do linguistics.

By the time I finally acknowledged that I needed healing for sexual trauma in my mid 30s, I still kept dividing it up into quadrants: here is where I hold some responsibility, here is mostly his fault, this wasn’t exactly rape…and on and on. I kept qualifying my stories with, “It’s not rape…not rape like you’re thinking.” I tried to divide my pain and put it in a hierarchy so that I could deem what was worth feeling and what wasn’t.

No one stopped me from qualifying my pain, because that’s what we are conditioned to do, by the law and by our language.

Buried inside me, I still held that toxic belief from childhood: “It’s just my body.” And no one told me otherwise.

As long as we’re splitting hairs, creating tiers and hierarchies, then we’re not focused on the real issue: the assault and trauma on our bodies, against our will and without consent.

While the law demands that we distinguish between sexual abuse that deserves the designation of “rape” and that which doesn’t, our nervous system doesn’t know such nuances.

To our body, a man going down on us whilst pinning our legs down as we scream in the dark is no less traumatizing than penetrative rape.

It’s believed that 83 percent of sexual assaults are not reported to the police. The most frequently cited reasons for this include the participants perceiving that they would not be believed, would not get support, would feel shame or embarrassment, or that it was not a reportable offence.

We are not reporting most sexual assaults because we are conditioned to minimize them, to believe we have “no right to.” We don’t want to report it if it’s going to be treated as “only” a sexual assault, and face the shame, shunning, and questioning of our integrity. We may think, “It’s only worth it if it’s ‘rape.'”

And even when we do report it, the legal system examines the offense within an evaluative system of whether it’s “bad” or “worse,” forcing comparison, dissection, and diminishment of our traumas.

We need to culturally call it all equally wrong.

As long as we’re willing to absorb some of the pain on behalf of the perpetrator (“maybe we shouldn’t have kissed him,” “maybe we should’ve gone home/drank less/worn something different”), then the offenders have room to escape full and total responsibility.

We need full accountability placed on those who sexually assault others. It makes no difference the sex, gender identification, or genitalia of any individual: nothing else matters except for the sovereignty of someone’s body being broken.

It’s not a math problem; it’s a violation. If it wasn’t consensual, it was sexual assault.

Our bodies will need care, repair, understanding, and healing in the case of all sexual boundary violations without qualification, justification, or hierarchy, not only those transgressions that tick certain boxes.

Abuse of any kind cracks our wholeness and bodily autonomy—no matter what definition it matches.

Until we acknowledge the true cost of sexual assault, and until we place accountability where it belongs, we will continue to pass down these same qualifiers and justifications to younger generations, teaching them to categorize and delineate their pain by arbitrary rules.

It is our sacred, sovereign, beautiful, feeling, sensing, organic body.

And it deserves to be treated as such, referred to as such, and legally recognized as such. 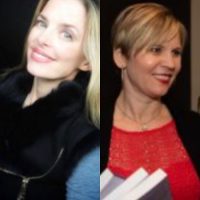