Why you should have Chocolate Every Day, Without Shame. 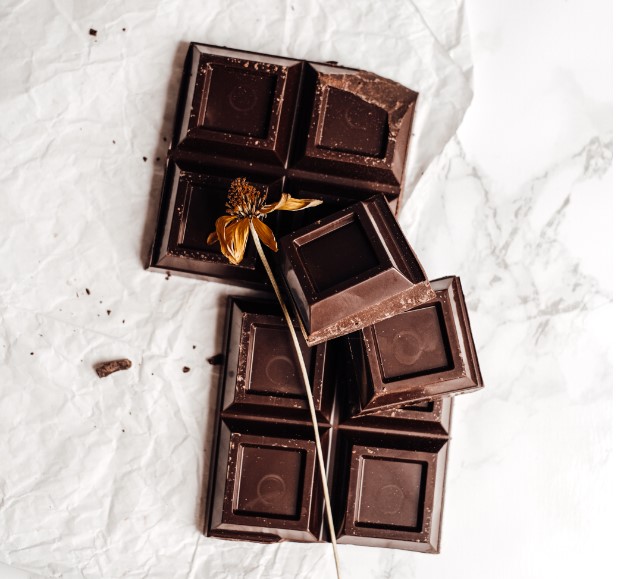 Maybe it’s the late-night snacking. Perhaps it’s portion control. For many, it’s a lack of information about what goes into our bodies. For me, it was always about balance. I was an extremist for a long time and still suffer from sporadic bouts of excessive eating. I still think about food probably more than anything else in the world. But for the most part, I feel like I’ve been able to get this one slice of my life relatively under control.

So, I want to share the things I do. I don’t claim to be an expert on anything (besides Harry Potter), but I do believe the more stories we hear, the more options we have to try.

From my late teens to my mid-20s, I would yo-yo back and forth 20 pounds year-to-year, and almost 10 pounds week-to-week. This wasn’t necessarily an obvious issue, or something that was noticeable to everyone, but it was a problem. My food intake and weight consumed my thoughts in a very unhealthy way. On extreme dieting days, I’d eat a grapefruit and a granola bar. I would turn down plans to visit friends or family because I knew there would be food involved. It sent me spiraling into bouts of deep shame where I’d be overcome with anxiety—I had lost control of myself. On binge eating days I ate 10,000-plus calories, the bulk of which was closeted.

I’ve told very few people the extent of it.

When I met my husband, I knew I’d be sharing my life with another person soon. This pushed me to examine the way my schedule revolved around mealtimes. It helped immensely that my husband is like a living buddha, an anchor that grounds me. He almost always leaves food on his plate, and he never does anything excessively (sports don’t count here). He also has no problem pulling out a bag of chips and eating a handful every day. Sometimes more than a handful, sometimes none at all. But he never eats the whole bag.

At first, the concept of having no compulsion or even desire to eat the whole bag was alien to me. I remember learning that he also ate chocolate every night. Here was the weird part: he had one (max two) squares of dark chocolate broken off from a large bar. How the hell did he not go back for more? How was that one sh*itty square possibly enough to satisfy him? Might as well not even have any if you’re going to limit it to one square. 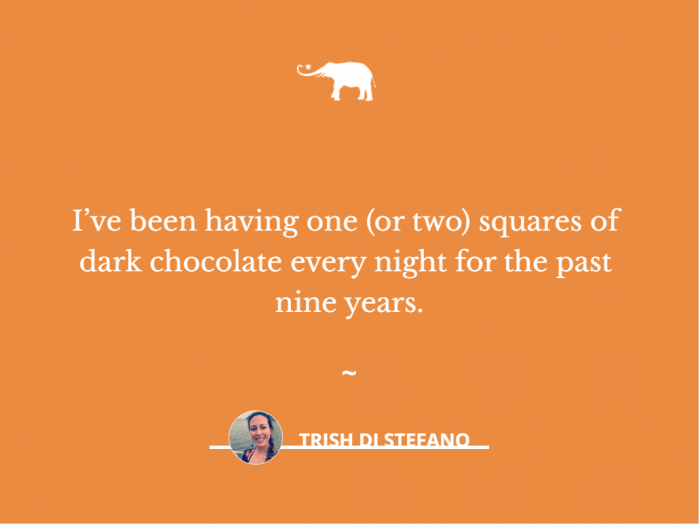 Fast forward to today. I’ve been having one (or two) squares of dark chocolate every night for the past nine years. And let me tell you, those couple of bites are delicious, glorious, luxurious, and just enough. I can’t tell you how many times my husband and I have shared that loud, obnoxious “Mmmmm, MMMMMMM!” while nibbling on what I had previously thought was a negligible portion of chocolate.

We buy the expensive sh*t. We switch it up once in a while and throw in some sea salt, or spicy, or darker, or darkest varieties. It’s become a really sweet, delicious ritual in our household. We don’t deprive ourselves. We don’t overdo it (this excludes the nights we have Oreo cheesecake waiting in the fridge to follow the chocolate up with—I am still human). We relish in the sweet simplicity of it all.

I am a food logger.

Food logging for me means making mindful food choices. It helps me to plan meals for the week. It helps me to remember recipes I’ve made up on the fly and logged the ingredients for. It’s great for calculating not just calories but specifics like protein and sugar intake. The key is that it shouldn’t be a prison door that confines you to anything—nor should it feel restrictive or judgmental. It should be informative, helpful, and motivating. If it doesn’t provide these things, I don’t encourage it.

But hear me out. Many people dismiss the idea because it sounds like a hassle. In all honesty, it is a hassle—but a short-lived one if you’re willing to put in the initial effort. If you make a lot of your meals from scratch, it does take a bit of extra time to key in individual ingredients and measures. But if you eat a lot of the same meals, you only have to spend time logging once, and then a recipe is saved for future reference. Favorites pop up for you without having to search or type in over and over. The app I use has actually saved me several times when I’ve forgotten how to make a sauce or a soup that I took the time to log as I was preparing it. It’s also a helpful tool when I’m making grocery lists and need a reminder of what I want more of, and what I could do without next week.

It’s been most helpful for teaching me about nutrition.

For example, I thought my morning muffins were little balls of protein because I make them with chickpeas and peanut butter. They are in fact total carb bombs, which is fine, but it means I don’t necessarily follow them up with toast or a croissant every day. My app shows me when I have a day that is really heavy in sugar, or really high in fat. I wouldn’t have realized that a peanut butter omelet (yes, it’s a thing) for lunch and chicken thighs with a coconut milk sauce for dinner meant that I was missing out on healthy carbs that day. Or that having a bowl of cereal for breakfast, a huge veggie salad for lunch, and a lentil soup for dinner could be highly nutritious, but didn’t provide me with any substantial protein. I feel better equipped using my app to balance a heavy carb day with a heavy protein day next. Instead of feeling terrible about one excessive day, I turn it into a win by focusing on something else moving forward. Keeping track allowed me to do this.

I stand behind calorie counting because it worked for me.

It has never been a chore, and it has never felt restrictive or claustrophobic. It has had the opposite effect, by allowing me to have internal conversations about what I put into my body. It has forced me to be honest with myself, which is ugly at times, but more often than not it’s beautiful.

I’ve logged many days of binge eating, and admitting the truth to my phone is always therapeutic and freeing. It puts things into perspective and helps me to let it go and move on to the next day. Thankfully, I’ve logged more balanced days than I would have ever thought possible 10 years ago.

And there is one food that is permanently logged in every single day, patiently waiting to put a smile on my face: two squares of dark chocolate. 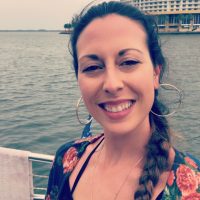 Trish Di Stefano is an idealist, recovering perfectionist and weekend glutton. She is Mom to an ultra-lovable goofball named Leo, and future Mom to a much adored little girl. … Read full bio