When Toxic Love needs to be Removed: 6 DIY “Surgery” Tips for your Life.

I fell in love, quite unintentionally.

He is such a beautiful soul: kind and injured…I see his magic and revel in how comfortable it feels to me.

I fell in love during an inconvenient time of my life, but it happened.

I am an overthinker, dissecting everything. I feel like a surgeon with a scalpel. When I first realised what I was feeling, I tried to cover it like a dog burying a bone in the backyard. It doesn’t exist if no one saw it! The thing with the denial of feelings is that this denial causes feelings to grow at an exponential rate, until the place where I have buried the damn thing has now gotten some huge life-form growing, and somehow, I cannot get rid of it.

I didn’t want to fall in love. I tried hard not to.

Initially, I believed it had happened because I tend to love people easily, so easily sometimes, so I tried to cut him out of my life. He had actually decided to cut me out of his first, to be fair; that was my interpretation and assumption. It definitely caused my stubbornness to rear its head.

I bled a little at first, I had sort of just surgically removed someone I cared deeply about, so bleeding made sense. Though that little bit of blood became an absolute river.

I spent days when I could barely breathe because the pain was so intense, as this was supposed to be a secret I had killed and buried in the backyard.

I did my crying when no one was watching. Silent grief had me on my knees while I was begging for mercy.

I finally decided to take out my surgical gloves, masks, and hair cap.

Then, I grabbed the scalpel.

The dissection of my pain took longer than I had thought it would when initially going in. As I got to one conclusion, the next trauma reared its head. I had to look at what the agonising silent treatment held for me, what the possibility of self-respect and healthier choices might look like, what my intentions had been all along, and if all this was a just toxic-based enmeshment I had created.

I found myself digging into my emotional and spiritual cavity, looking for the reason as to why feeling loved and having it seemingly taken away left me frozen and unable to move. I dug so deep to get that answer. I was up to my shoulders in blood, gore, and trauma-based rot.

I kept checking my phone to see if he had contacted me.

I could abandon this mission, sew myself closed, and carry on. But he never contacted me. Only now do I see that he couldn’t. We are like a mirror to each other. He feels the same things I feel, but unlike me, he buries them deep inside. He has faced immense trauma and pain; love is not a safe word for him at all. He has turned off his ability to feel in order to protect what is left within his fortress’s walls.

My presence in his life makes him feel a lot, too much, things he has worked hard to forget.

Eventually, I did reach out, and immediately, it calmed the tension I had been carrying in my heavy heart. Just seeing his name come up as a contact made me feel better. He seemed responsive at first, but I knew the time for him to stop replying would come too soon.

All I can conjure up when I think of him is what an amazing person he is, what a real man should look like, and how safe I had felt in his presence.

After my intensely painful dissection and upon sewing my cavity back up, I have been contemplating my findings.

It is like an all-in-one experience in many ways.

>> I have realised, after all these years, that being on the receiving end of silent treatment doesn’t necessarily mean that I have done something wrong and am being punished for my poor behaviour. Actually, it has nothing to do with me. Unless the person dishing out the silent treatment can become emotionally mature enough to have a difficult conversation with me, I am choosing not to pick up extra responsibility and overload myself with an unnecessary burden.

>> Yes. I can come across as extremely intense, but I am learning to appreciate that about myself. It is because of my intensity that I am able to go into dark places and reach people who seem unreachable, just to attempt to help them find their own inner beauty in spite of any shortcomings, and help them believe that they deserve the light too. I will no longer allow this intensity to be a point of shame for me.

>> I have been reminded that it is impossible for me to love someone so much that they will love me with the same level of intensity in return. I get this now, completely.

>> Loving someone doesn’t mean that I will have the pleasure of experiencing something beautiful within a relationship with that person. Loving someone, truly loving someone, means caring enough about them to wish for their happiness, even if that may exclude me.

>> At the end of the day, I cannot save anyone but myself. If respect is not being served, I need to become my own knight in shining armour—more like battered armour—and get the hell out of that space.

>> People will make time for me if they really want to. Being too busy is an excuse and, quite honestly, a red flag not to be ignored. I shouldn’t need to worry about this. The right people will find me at the right time, and behave in ways which show that they actually want to stick around. I truly deserve that.

As I conclude this, a huge lump is forming in my throat.

This Lion’s Gate Portal has been a big event for me this year, possibly one of the biggest in an eventful year thus far. I don’t think I will ever be the same again after this portal has closed.

And I somehow feel glad about that. 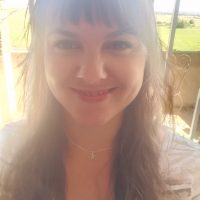 Lindsay Booysen is a woman in search of the depth of her soul. … Read full bio