Money has been used to Control Women for Centuries—& this is how We’re Reclaiming our Financial Power. {Partner} 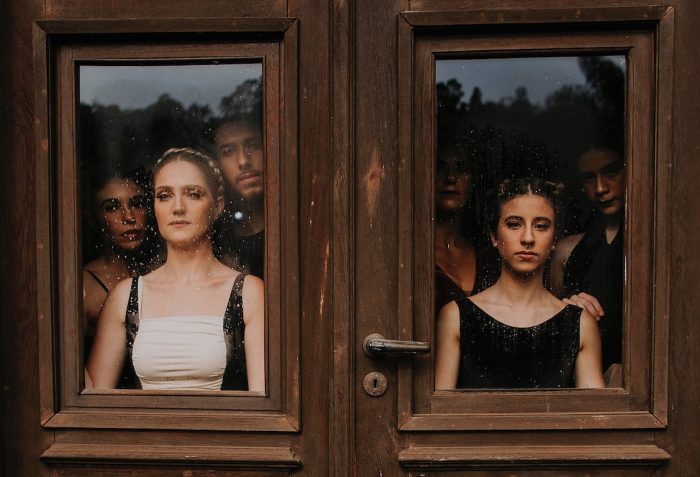 This article is written in partnership with Dow Janes—they’re dedicated to empowering women+ to take control of their finances mindfully and compassionately, and we’re honored to work with them. ~ ed.

I didn’t know how triggering financial conversations were for me until I moved in with my (now) husband.

My husband, the son of a CFO, would stare at me, baffled. “Why can’t you just have a normal conversation? We have to talk about these things.”

Sure, he was right. But why did it suddenly feel like he was a stranger asking me about my medical history—like it wasn’t his business? It was, now. I felt my chest tighten, my palms moisten, and my eyes well up with each (seemingly standard) question.

He and I have completely opposite upbringings. His parents’ marriage? In tact. His command on finances? Unmatched. He checks the stocks app more often than I check Instagram.

I’ve seen the devastation of divorce, crippling debt, penny pinching, and hollow facial expressions in the wake of holiday spending. I’ve spent my young adult life being acutely aware of the trauma I grew up with—but this—this was a new brand, fresh to the turmoil market.

Financial trauma. Oof, even writing those words sends a chill down my spine.

As a millennial, I fall into the one-third of people who experience symptoms that “often present similarly to those who experience post-traumatic stress disorder (PTSD) from other events.” (3)

Financial trauma isn’t necessarily homelessness, or eviction, or an extreme event—it can be, but most often It’s caused “when expenses outweigh income for an extended period of time.” (3) It’s not the inability to make payments, but the sh*storm cycle of events that follow that initial missed payment.

It’s possible to heal your relationship with money. Learn how, for free >>

According to the American Association of University Women, women make up nearly two-thirds of those who are burdened by student debt in the U.S.—a club that I’m begrudgingly a part of. (2) The truth is, women of all ages have been destined for failure when it comes to finances. It’s not our fault, and it’s a reality that was intentionally designed by men.

“Banks could refuse women a credit card until the Equal Credit Opportunity Act of 1974 was signed into law. Prior to that, a bank could refuse to issue a credit card to an unmarried woman, and if a woman was married, her husband was required to cosign.” (1) That means either we, our mothers, or our grandmothers, didn’t have access to managing our own finances—the ‘70’s were not so long ago.

Marriage was founded as a financial lifeline for women—certifying society’s license to control women and their place in the world. This produced generations of women who stayed in toxic relationships longer than they needed to just to survive. No wonder so many women, myself included, have toxic relationships with money.

Unless you’re born with an inheritance, you inherit the generational trauma around money matters, which leads to glaring gaps between how men and women show up in financial scenarios.

Nothing has exposed the disparity between women and men more than the past year and a half. No one was hit harder by the financial collapse during the pandemic than, you guessed it, women. Overall, women—the majority of them BIPOC—lost a net of 5.4 million jobs, which is about 1 million more than men, and largely attributed to the lack of daycare options available. (2)

So, what is a human socialized as a woman to do, now? We’re damned if we do, damned if we don’t. Our society wasn’t built to support us—but that’s exactly why we need each other, and fellow women+ we can talk to, like the powerful, compassionate women behind Dow Janes.

A few decades ago, Britt Williams Baker’s mother was a member of a club with a group of 15 women who were determined to reclaim their power over their finances, without relying on the input of their husbands. They gathered regularly to pool their money and make investments that they collectively saw fit, and cleverly called themselves Dow Janes.

Join a community of bad*ss investors with this free training >>

In 2017, inspired by her mother and the female investors in her group, Britt conceived her own rendition of the investing group—teaching others how to invest, and creating a judgement-free zone for women to have conversations about money.

With bi-monthly book-club-esque sessions around spending, budgeting, setting financial goals, and investing, Britt discovered there was a need for this safe space for women that stretched well beyond her living room. 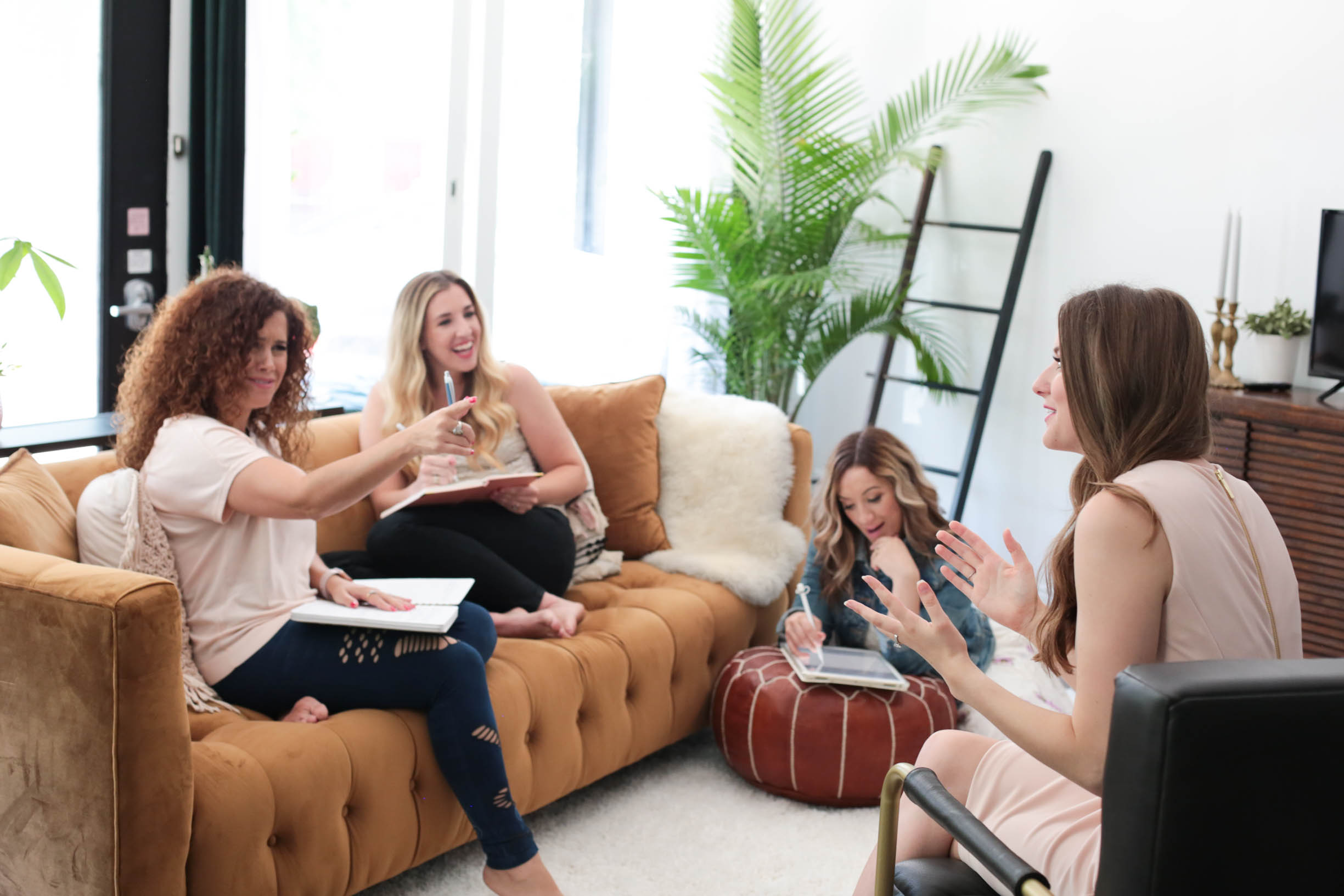 That’s when Britt, a Harvard Business School graduate, and Laurie-Anne King, a money-investing maven, teamed up and turned the living room concept into an online curriculum and community named for Britt’s mother’s club: Dow Janes. They’re now leading the charge for their 2,000+ members to close the financial gender gap with empathy, understanding, and digestible steps that you can’t not follow.

Their goal is to transform women+ from debt-bearers to bonafide investors by 2025. As Laurie-Anne would say, “life is hard enough without worrying about money,” and it’s high time women+ are empowered to command their finances to afford themselves freedom.

Okay, great, sounds awesome—but how does this student debtor get there? I literally avoid looking at my credit card balance at times because it’ll get me spiraling into next Tuesday.

Don’t fear your finances—embrace them. Take the first step with this free training >>

Just like any painful relationship, we can’t heal from it if we don’t talk about it. Especially for women who shoulder the weight of financial trauma, were raised in households where money conversations were unheard of, and were brought up witnessing knock-down drag-out financial fights between parents—talking about where you’re at financially is scary as f*ck.

The good news is that wherever you are, and whatever you’ve experienced, the Dow Janes have had a taste of it too. They’ve been there, and they’re with you. There’s no judgement. There’s no guilt. There’s no shame. Breathe, girl, you can do this.

Debt of any kind can lock us into a merry-go-round of financial terror. It’s impossible to get off the ride until we do something about it, but how can we do that when we’re paralyzed by fear?

Britt and Laurie-Anne know there’s only one exit strategy: to address your emotional relationship with money. Start right where you are. Anxious? Depressed? Guilty? Shameful? It’s all okay. It’s all welcomed. It’s all valid.

Just by naming it, you’re already giving it less power. 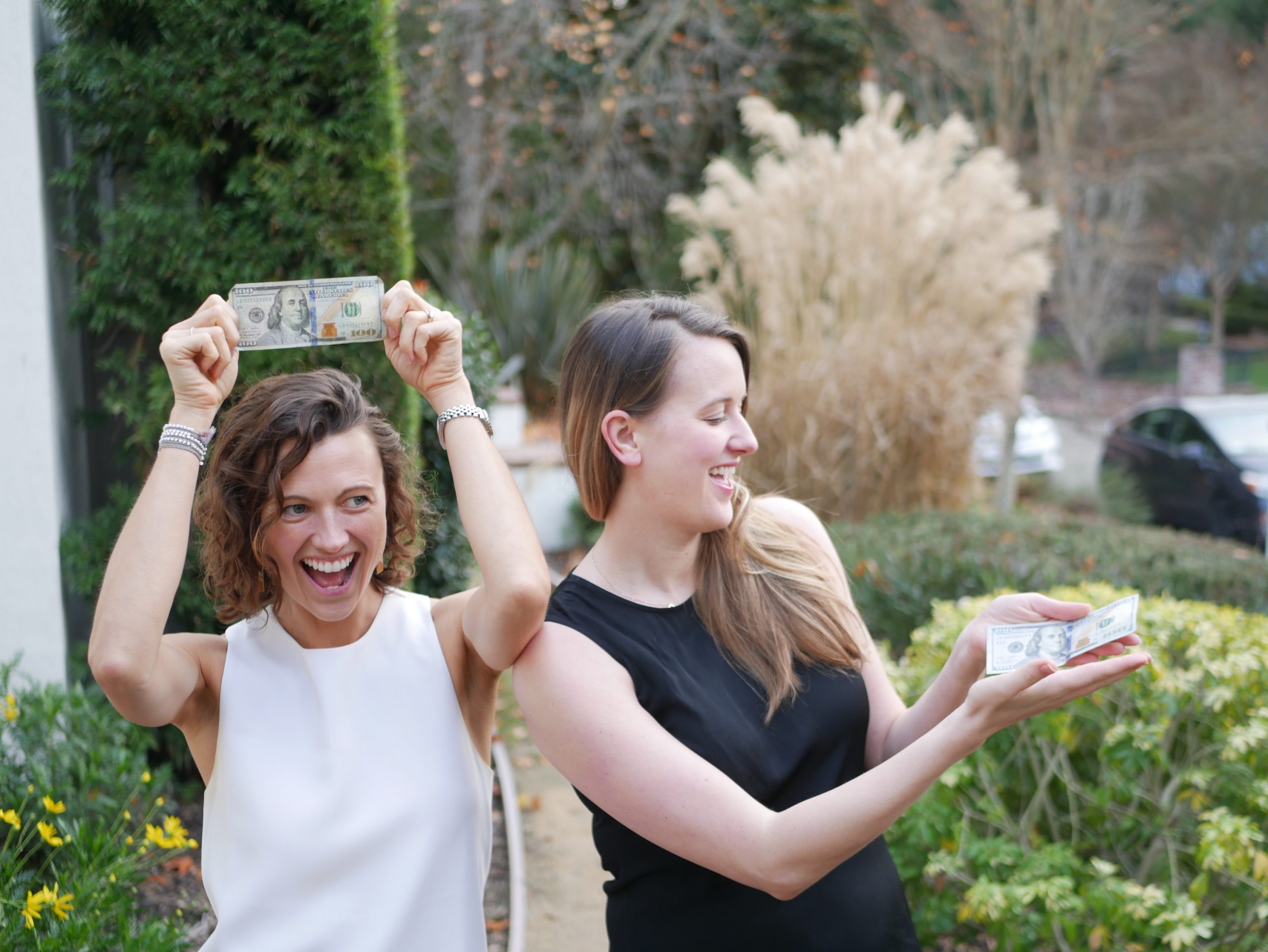 Uh, what? My brow furrowed the second I initially read that statement. Trust me, I get it. Spreadsheets give me anxiety. Looking at my loan statement makes me want to throw my phone out the window and go off the grid. How in the actual hell can money management be soothing?

The savvy money masters of Dow Janes have made it possible. With their self-care money rituals, and tiny, teeny, baby steps, you’ll feel encouraged, empowered, and excited, even, to traverse your tower of financial trauma.

“This team is kind, encouraging, thoughtful, and sooooo smart and knowledgeable. They do an excellent job of walking with you every step of the way. I am learning so much and feeling more confident after each lesson or call.” ~ Jen M.

The key? Simplicity. Something as basic as focusing on purchases that feel good, instead of ones that don’t, can change your whole life. Cringing after you hit that “add-to-cart” button? Let it go. Notice the sensation of your body telling you that you don’t need another pumpkin tchotchke for fall.

Align your spending habits with what feels good. Learn how with this free training >>

Britt and Laurie-Anne spell out more about that, and several other “oh my goodness, that’s me” money habits in their free Think Like an Investor Webinar. It’s interactive, it’s accessible, and it’s giving away Britt and Laurie-Anne’s bag of (almost totally non-technical) tricks that will show you exactly how to get your finances under control with these nuggets of wisdom:

>> A step-by-step process that empowers you to gain clarity around your money management, put a savings ritual in place, and start investing.

>> How to make saving money feel as natural as drinking water, so you can make guilt-free purchases that actually align with your values.

>> The number one thing you should be taking advantage of right now to earn passive income and make your relationship with money really comfy for the long haul. 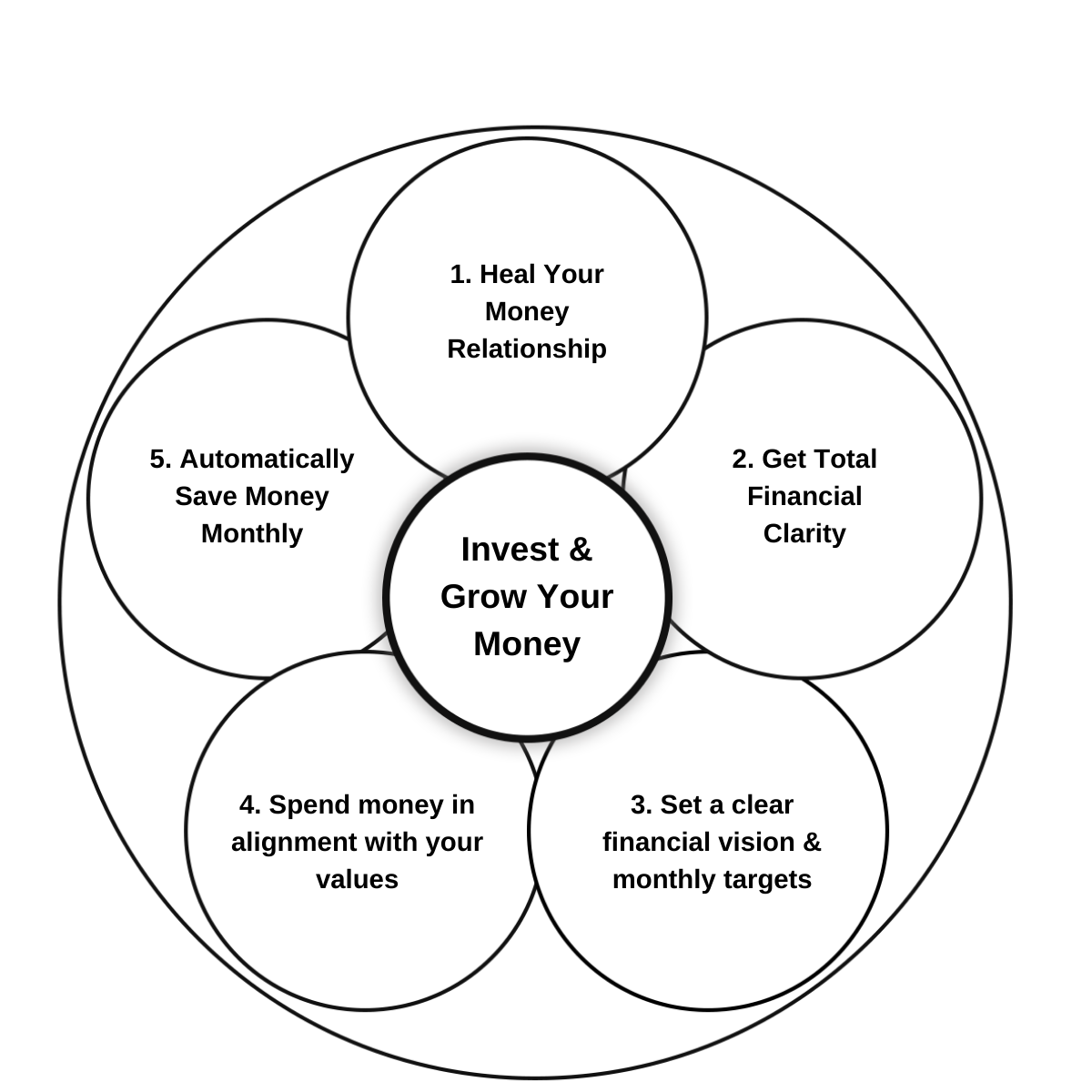 These strategies aren’t lofty, they’re already within you—you just haven’t had the support or opportunities to uncover them—yet.

Psychologically, women heal from sharing, talking, and relating to each other—and with a topic as taboo as finances, those healing methods are completely absent. The community that Dow Janes offers brings those conversations out of the financial safe, and into a safe space.

I had a chance to not only absorb the knowledge and vulnerable stories from Britt and Laurie-Anne’s webinar, but to join a live meeting with around 50 of the women who are changing their lives with their Million Dollar Year program.

We began by sharing financial “wins,” and they ranged from paying off $8,000 in credit card debt, to giving up a weekly Starbucks coffee purchase. Each win was celebrated regardless of their perceived magnitude, and all who attended showed up exactly as they were, right then.

And me, a traumatized millennial with my student debt mountain, and no retirement date in sight, felt just a little less worried. I felt just a little more hopeful that I could do what they’re doing—because I could see them, and hear them, and they were really doing it.

You can do it, too. The first step toward financial freedom is one free training away >>

When you grow up under a roof made heavy by financial stress, it’s unimaginable that you can build something better for yourself. It’s hard to imagine that you even deserve it. It can feel more comfortable, safer even, to stay where you are. It’s all you’ve known, after all.

Dow Janes is here to help you believe, and truly feel, that you do deserve better, and that becoming a bad*ss, debt-free investor is not only possible—it’s easy. The hardest part is getting started, and the best part is that the women around you will help you love yourself a little extra along the way.

Don’t let the fact that the world didn’t invest in you stop you from investing. Take your first step toward freedom, and sign up for their free training, today.

No question is too basic.

Learn how to track every dollar.

You can heal yours.

Kaitlin May is a ukulele strummer and singer whenever she is not writing on Elephant. Most recently, she has become a purveyor of mindful, on-mission products that Elephants … Read full bio

Routines vs Rituals—& why we Need Both to Live a Peaceful Life.