How to recognize when we’re Projecting our own Unresolved Sh*t onto Other People. 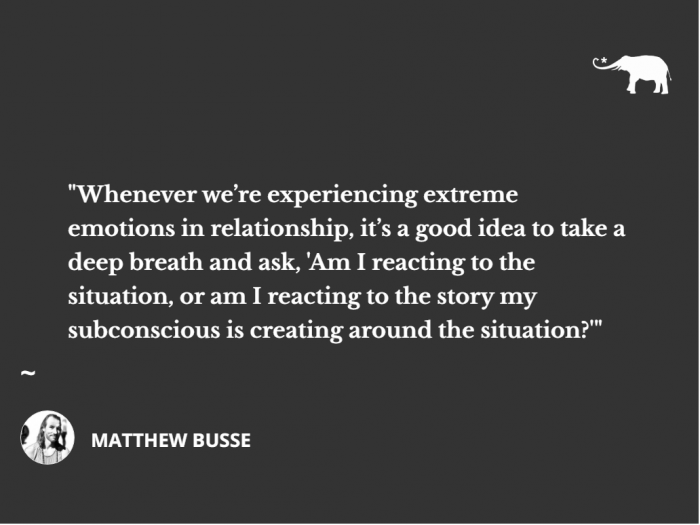 We met through a friend and got to know each other playing music together. From the start, communication was easy and open as we explored each other’s personalities. We shared similar worldviews and our life purposes were aligned. We enjoyed dazzling sunsets on the Humboldt coast and enchanting walks through the redwoods. We even meditated together. And then there was the physical chemistry that filled me with breath-catching tingles.

But a month into getting to know each other, it all unraveled in a cataclysmic fireball of pain and confusion.

There were, shall we say…entanglements with her ex. When she came over one afternoon to tell me that she needed to slow down our romance because it was happening too fast and too soon, the message my mind heard was that she was getting back together with him. (There’s more to that story, but for privacy’s sake, I’ll omit the details.)

The important part is the message I heard in that conversation sent me into a tailspin. Yes, it was only a month, but between my Scorpio moon and my well-documented proclivity for histrionics, I felt devastated, destroyed, confused, betrayed. It happened so fast—one day, we were poised to co-create a wonder of love, light, and magic, and two days later, it was over, all due to circumstances beyond my control (or so it seemed at the time).

Two weeks later, after I calmed down enough to have a rational conversation (thanks to my dear friends who helped piece me back together), we talked again, and I realized the full extent of the breakdown in communication that occurred between us.

I saw, clearly, how my mind had constructed an alternate reality that was completely disconnected from her reality. All my intense suffering was a reaction to that alternate reality instead of the actual conversation. I was lost in a state of temporary insanity, trapped inside this self-created story of betrayal and confusion.

As I sat there dumbfounded and slack-jawed, with the full scope of my madness unfolding in my conscious awareness, one question kept coming back to me: why?

Why did my mind do this to me? Why did my brain jump to these worst-case-scenario conclusions? What the f*ck happened to me? How did I get lost in that insanity?

Luckily for me, I was reading a book that answered many of these questions, called Love between Equals: Relationship as a Spiritual Path, by Polly Young-Eisendrath, PhD.

This book describes the psychology of projective identification, how relationships can suffer when we subconsciously project our own unresolved sh*t onto other people.

In the author’s words: “When a couple feels out of balance, or an individual feels alienated, there is a strong desire to blame. Carl Jung called this desire ‘projecting the shadow,’ by which he meant unconsciously experiencing your own disavowed tendencies in someone else and then trying to control them in that other person.”

That’s exactly what happened to me. I started feeling threatened when she said she couldn’t move forward with our romance, and then my neocortex shut down and my shadow blindly lashed out.

The story my mind created about her getting back together with her ex was a projection of my own subconscious tendencies. The tendencies that have caused patterns to repeat in my relationships over and over again.

Recently, the pattern I’ve been experiencing in my relationships has shifted. After I wrote about my pattern of infatuation, love-bombing, and avoidance, the pattern shifted and I became the anxious/insecure one.

In my last three attempts at having a relationship since writing the infatuation/avoidance piece, I found myself constantly fearing that she was losing interest and analyzing every interaction to assess her feelings about me. I worriedly wondered why she took longer than an hour to respond to my text. All you anxious/insecure people know exactly what I mean.

But then I realized all that anxiety, all that crushing insecurity—that’s just the flipside of my previous infatuation and avoidance pattern. What both patterns have in common is an underlying, subconscious tendency to view myself as a victim who’s suffering unfairly from circumstances outside of my control. That’s the monster lurking in my shadow, this tendency to define myself as a victim.

When I was in the infatuation and avoidance pattern, the story of victimhood my shadow created centered on not being able to find The One. In this story, poor little me just wanted to find someone to love, but no one I found was “right” for me. I was confusing the rush of infatuation with real love, and when the infatuation wore off, I thought that meant it wasn’t real love. I was caught in the narrative that I couldn’t find The One who would magically bring true love into my life.

I broke out of the infatuation and avoidance pattern after I realized that real love isn’t something we find. I started to suspect that real love is created by two people willing to work for it, to honestly examine their shadows and vulnerably talk through the stories their subconscious is projecting onto the other person.

My conscious mind finally gave up the quest for The One, but in subsequent attempts at relationships, my shadow tendency of victimhood found a new story to play out: now I can’t find someone willing to talk through all this sh*t with me.

But that is just another narrative that my subconscious is projecting onto reality.

In this most recent example, in that conversation, she was willing to talk more about us, but when my shadow started fabricating the story of her getting back together with her ex, I shut down. I didn’t want to talk anymore, I just wanted her to leave so I could wallow in self-pity and righteous indignation over how she’d treated me. I got triggered and started living in my narrative of victimhood instead of consciously reacting to what she was saying.

That’s what ruined everything—not her, not her ex, the culprit was my shadow story of victimhood.

To paraphrase a passage from Love Between Equals:

“Everything we perceive or remember washes through our unconscious before it is sensed as something we see, hear, feel, or think. Every moment of what we know is shaped by us and marked by our own particular shadow projections.

We are not machines or anything close to it. If we are relaxed and open, then we may be able to be more accurate about ‘the facts,’ but if we are feeling emotionally off—threatened or confused—then our eyes, ears, nose, tongue, and body all operate in a manner that is defensive and self-protective.

I thought I knew exactly what was going on in her head, and that prevented me from engaging in conscious dialogue with her. Perhaps we could have maintained a friendship if I hadn’t shut down and started living in my own reality, if I hadn’t started reacting to my story of her instead of reacting to her.

The overarching story of my life is one of victimhood, and that probably resonates with some readers, but many other stories are possible, such as neediness, entitlement, righteousness, and others.

If you’ve had enough of suffering through endless cycles of the same pattern, you might consider asking yourself, “What subconsciously created story am I living in?” 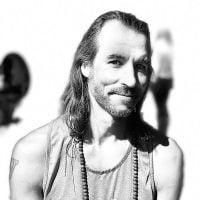 Matthew Busse is an eternal optimist who believes in the power of words to help people open their hearts to love. He is a meditation and yoga guide, as well as an Artist in Re… Read full bio

Love is Not Enough: Why we Can’t Always Be with a Soulmate.