Hello, I am an Impostor.

Ever since I was a child, I have introduced myself by saying, “Hello, my name is Raúl.”

In reality, I should have been saying, “Hello, I am an impostor.”

For as long as I can remember, my mother would remind me that she spent three agonizing days laboring for my birth. She knew once I was born that I was going to be a difficult child and she needed to gain control of me right away. I believe this was partially because she was a single mother, but this term does not begin to describe who she really was. She had a deep connection to her zodiac sign, the Taurus. The way she would walk was smooth, swift, and with a purpose. If she locked eyes on you, her eyes would pierce your soul like a bull’s horn. The respect that she demanded from others could only be matched by the toughest of dictators. However, the level of output she required for herself no one could impose on her. She truly embodied the definition of a strong woman that lived by her own rules.

I was told that when I greet a person, I should have a gentle smile, make direct eye contact, and seem shy so I would be able to gain the trust of others. The trust gained was good for having an ally, but in reality, it was just for some form of manipulation. This and other core philosophies were instilled in me, with the caveat that once I turned 18, I would be an adult and would be able to do as I wished. I can vividly remember introducing myself to anyone and everyone who I came in contact with at a young age.

I started kindergarten at four years of age and by then, I was a professional impostor. Children at this age are naive and silly learning about the world, but for me, it was a different story. At school, I got to know all my classmates very well because I would listen to them. I would not give away any piece of information about myself. I was very good at recycling and repurposing the description of other kids and adapting them in such a way that I could replay them as something I knew but not necessarily something I did. My conversations of half-truths were great because all the kids seemingly liked me and, as a result, the teachers would notice and they would like me as well. This skill development continued from kindergarten to fifth grade in my birth country of Panama. Every step of the way, I became more and more proficient in the art of being a someone to anyone.

One day, the dream became a reality. After seven attempts over multiple years, my mother was able to receive three visas to come to the United States. By this point, I was 10 years old and I was brought to the land of the American dream. I did not know what that meant but that is what my mother said, and if she said it, well then, it was the truth. She told me that I was here to have a better education and a better life. I still did not understand what she meant by all of this, but again, I trusted her, and I understood that education and a better life is what I was here to do.

The thing about getting a better education in the United States is that one should probably know the most spoken language, being English, and I barely knew how to count to 10 and say a handful of colors. I was immediately placed into school, carrying on with fifth grade as I had been in Panama. Even though I did not speak English, I was not reserved in executing my warm greetings to my new classmates. Knowing how to fake a happy smile gets you far in the fifth grade, which earned me a fifth-grade graduation without ever doing any real course work. I was completely shocked by the school system in the United States, so I was genuinely excited for the following school year.

After I learned to speak English, I had to start the introduction process again and get to know my classmates. I applied the same tactics as in my younger years. I would let the others speak and quickly learned about them and the American way of life. This was now a skill that paid off and helped me along the way. I was learning about my classmates and what living in America was like on average. I did not hear the stories of gangsters who protected the block. I did not hear about kids not having rice to eat. I did not hear about the whole family having to sleep in one bed. What I did hear was about happy families that spend time together. I heard of each child getting their own bedroom. I heard stories of weekend trips, sports outings, and vacations. Once I learned of all these things, I found myself feeling that I was in a place where I had nothing in common with those around me. But they didn’t know that. They didn’t know the real me. They only knew who I wanted them to see.

A few short years later, I was graduating high school. I was 18, and therefore, I was an adult and according to my mother, I no longer had to follow her instructions. However, this was not entirely true. The larger goal of fulfilling her American dream, getting a better education, and creating a better life was still at bay. I resisted the notion of college but ultimately pursued it with reluctance. Once there, I made swift work of the system, and through another stage in my life, I was able to meet people without letting on about who I truly am. I graduated from university, started working a corporate job, and finally, after roughly 15 years, the dream was finally complete and my mother was happy.

Unfortunately, time elapsed is time no more. I only have this moment and maybe some moments to come. So I would like to try something new today:

Hello, my name is Raúl and I am just a wandering soul in this place we call Earth. Who are you? 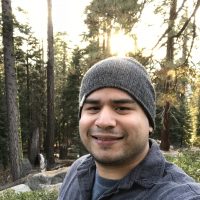 Raúl Stevens is a wandering soul from Panamá who found his way to New York, currently living in Ohio, and on his way back to California. He loves to create with his hands an… Read full bio