3 Ways being Ghosted has helped me Grow.

The setting is always a little bit different.

Sometimes it’s a crowded restaurant, or a family function, or an outdoor art fair with lots of tables set up.

People around us might swoon over a dessert table or maniacally move through crowds.

The situation is always the same. One moment he is there, the next he is gone.

In the earlier versions of this dream, I was able to catch up with him. “Why didn’t you say goodbye?” I would ask.

In more recent versions, he is just gone. I cannot find him.

In all of the versions, my friends always appear by my side. “Do you want to go look at the cakes?” they might ask me as I scan all the exits to make sense of the disappearance. Fitting, meaningful, and a welcome reminder. When people want to, they stay. If they don’t, they go.

I don’t need Freud to understand that this repeat dream reveals abandonment issues. Further to that, I feel shame for being affected so deeply. He isn’t dead after all. And look, the people who really matter always appear by my side—in my sleep as well as my waking life.

“If they’re emotionally unavailable, of course they aren’t going to end things in a graceful way.”

Therapy has been serving far greater purposes than I could have imagined.

I had been, in fact, choosing emotionally unavailable men. “That’s so cliché. I never thought it would apply to me,” I responded.

I’m no stranger to the lame ending. I experienced a lot of ghosting before it was called ghosting. I think back then it was called “disappearing” or perhaps just plain “being an asshole.”

I found different ways to rationalize the pattern over the years. By putting them into buckets “Have to stop dating musicians!” Or by blaming myself, “If I was more successful/prettier/better in some way or (insert any other untrue thing you can think of here), this wouldn’t have happened.”

What was strange was finally exploring why it kept happening. Not rationalizing it, or just getting over it until the next time it happened—but going through it and learning from it.

I have heard time and time again about how things can get ugly when you start facing yourself in therapy. That definitely rings true.

Yes, I want to stop getting ghosted.

No, I don’t want to talk about the time I peed myself in the schoolyard in the third grade.

But there are other sides to facing our stuff. The side of feeling better. The side of recognizing patterns. The side of making more informed choices and conscious responses. Above all, the side of not blaming ourselves for everything, especially other people’s behavior. These few things have really stood out to me as I experience the ongoing process of going through it.

I pay better attention to my first instincts.

When I think back to the ghosters, they all have one thing in common. I didn’t like them at first. Something about their behavior turned me off—the way they approached their work life or being in constant victim mode or never taking the blame for anything.

They had patterns of “not saying goodbye” and being unreliable or inconsistent in various areas of their lives. If a guy couldn’t be cordial to someone waiting for his parking spot, then could I really be surprised when he couldn’t admit his disappearance was immature? Or when months of photos of him and his new girlfriend suddenly appeared on Facebook, could I really be surprised that he was the type of person to purposely block me from being able to see certain photos until it was no longer necessary because he was no longer going to get anything from me?

If I think back to the first moments of meeting him, I had a yucky feeling. Why I didn’t acknowledge the first instinct and moved forward anyway is a work in progress being uncovered. What is important is that I notice it now and don’t end up on the other end of another “thumbs down” relationship.

I notice how I feel around people.

Another common denominator with all of them is that I did not feel good around them, whether it was because they belittled me in some way (backhanded comments were a popular one), because their behavior turned me off (see above), or because the worst parts of myself would come out around them.

This doesn’t only apply to romantic prospects but work colleagues, friends, the person who is selling me something at the store. If we don’t feel good around someone, it is for a reason.

I can share that I’ve always been quite petite, but I’ve also never minded. So when I suddenly found myself in one relationship feeling deeply insecure about my height that should have been an indicator to me that he was not my person. And he wasn’t. If he was, I wouldn’t have spent months searching for him in my dreams.

Now I notice if my best self is not shining around someone, both privately and publicly, and I ask myself why that is.

I work to let go of how I think someone should behave.

Not because that’s what happens every time or because it is easy but because now I am aware of how it can serve me.

Do I think that any of the ghosters should have been less cowardly in their endings? Yes. Does it matter? Only in the way that I’ve learned from it and who I choose to interact with. When push comes to shove, the fact that they probably sprinkle lame endings into most areas of their lives is their problem. I don’t need to suffer because they are emotionally unavailable. How many times should I relive the disappointment of an empty phone log where once it was full before I free myself?

I think it is okay to grieve because it too is a part of the process of growth. However, if I hold on to how I feel I deserved a more respectable conclusion to the relationship, I suffer because I am never going to get it. Was Mr. Irish Exit having dreams about being left stranded at parties? Probably not. He was likely too busy preparing to deliver a lame ending to the next person—romantically, professionally, or otherwise. That is him, his behavior, and his business.

Continuing to grow and uncover the positive sides of working through things requires consistent work. It’s not void of sadness or disappointment. It has ups and downs and dreams on repeat. It consists of some rough meditation practices and pangs of sadness when my day in history flashes across my iPhone.

It is also filled with more informed choices and more often. In those more frequent moments comes a feeling of lightness. Another side of facing my stuff.

And eventually, with it might come dreams of perusing a dessert table without worry of who has escaped out the back door—because I ain’t afraid of no ghost. 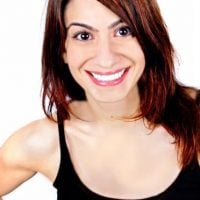 Kristin Russo is a pole dance enthusiast with a love for languages. Continuously focused on personal growth, she is a student of self-development, science, and holistic philos… Read full bio