Dancing with the Wolves: How can we Love something we can’t Control? {Partner}

This article is written in partnership with WildEarth Guardians, a non-profit organization that aims to inspire leaders to do right by wildlife through organization, campaigning, and legal advocacy. We’re honored to work with them.

Your cute little rescue dog is probably more dangerous than a gray wolf.

Yes, you read that right.

Now, obviously, a gray wolf is far stronger than, say, a chubby little pup like mine and (possibly) yours. But wolves are actually afraid of humans. And that fear is important to look at when we consider the role that predators play in an ecosystem.

The ecology of fear is a theory that takes into account that the stress and fear involved in prey avoiding predators can reduce the fertility, survival, and thus the total number of prey in numbers that would far exceed what the traditional view of ecology takes into account (1).

In that case, when we view ecology through the traditional lens, we risk profoundly underestimating the ecological role of predators in our ecosystems—including our own.

Our species (homo sapiens) is an animal that may very well be considered one of the most complex apex predators, or top predators, on the planet. In other words, we are at the very top of the food chain. We hunt and kill the mightiest of beasts that exist in just about every ecosystem.

End the war on gray wolves and other vulnerable wildlife. Take action here >>

So, while we may believe that we exist separately from wildlife and are thus not affected by an ecology of fear, that concept would be mostly false; we are undoubtedly, inextricably bound. But it is true in this one way: we humans are the only apex predator that can choose to make an ethical change (2) if we open our eyes and see…

To describe the relationship between humans and wolves as slightly worse than our relationship with dogs would be an understatement. Humans have been hunting wolves for more than 8.000 years (3).

So, when I started reading about the work of the WildEarth Guardians, a non-profit organization that aims to inspire leaders to do the right thing (and hold them accountable when they fail to do so) through organization, campaigning, and legal advocacy, I was asking myself, “Why would I want to protect wolves? I am scared of them.” I had no idea.

But then, I met the organization’s executive director, John Horning—and my mind changed.

While there is no doubt that wolves are predators (and aren’t we all, to some degree?), there isn’t much mainstream conversation that occurs surrounding how predators serve to keep wildlife in line and ecosystems thriving.

As we already established ourselves as apex predators that wolves fear, there aren’t many reasons for us to be afraid of wolves. But that doesn’t apply to deer—and that’s a good thing. Wolves strengthen the resilience of nature by establishing an ecology of fear that works like this:

Without wolves, many animals would have no reason to keep moving. In the absence of predators, they tend to become lazy and settle in certain areas.

Kind of like humans, when we are lazy and settle in, say, a metropolis, we eat up more of the land’s resources—and in the case of deer, that’s certain plant species. What sounds like a seemingly ideal existence for a deer actually threatens biodiversity. 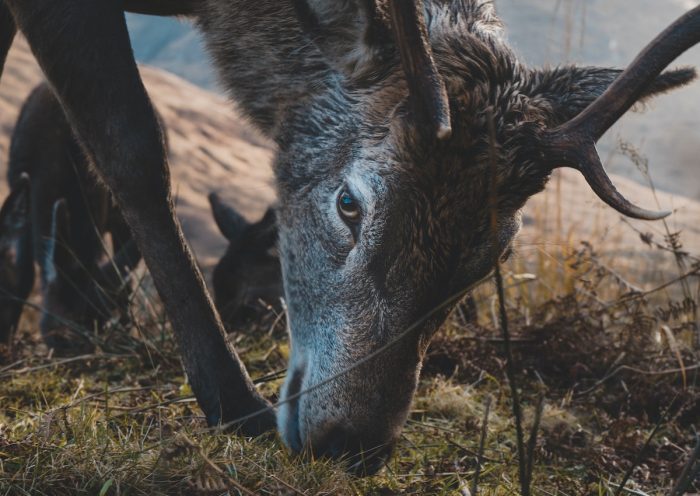 Enter the gray wolf. Nature knows how to keep a balance between safety and a danger zone, ecologically speaking—and wolves are a vital part of this dynamic.

In the case of deer and other prey, the fear brought about by the gray wolf’s presence causes fertility and survival rates to reduce. Hunting adult prey sustainably culls the adult population of an ecology and, oftentimes, plant life flourishes. Even the carcasses of a wolf’s prey help to redistribute nutrients and provide food for other wildlife species, like grizzly bears and scavengers (4).

It sounds like nature has a pretty good system, right? So, why do we so often tend to insert ourselves into the picture?

As humans, we have a tendency to protect weaker animals, but that’s not how nature works, which makes it hard for us humans to understand wolves. And what we don’t understand, we fear and push away.

We can see this at hand when we look at the debate between conservationists and livestock farmers—and it creates a fascinating conversation.

Join the gray wolf conversation, learn about the issues & make your voice heard >>

On one side of the debate, we have activists and environmentalists like John Horning who try to protect wildlife and battle to convince a fearful public that wolves play a crucial role in the health and balance of our planet—that their presence is a sign of a thriving ecosystem.

On the other, we have farmers who pretend to protect their animals from wolves. I say pretend because we all know why a livestock farmer cares about the safety of his animals—he wants to kill them himself and make profits.

Who’s encroaching on whose territory?

Historically, wolves have stayed away from our colonies and neighborhoods, but we have almost destroyed theirs.

The historic range of the gray wolf covered over two-thirds of the United States, but today, gray wolves have populations in Alaska, northern Michigan, northern Wisconsin, western Montana, northern Idaho, northeast Oregon, and the Yellowstone area of Wyoming. The reason for the reduction? Extensive hunting to the point of eradication (5) for the purpose of sport hunting, deforesting, oil drilling, and agricultural development. 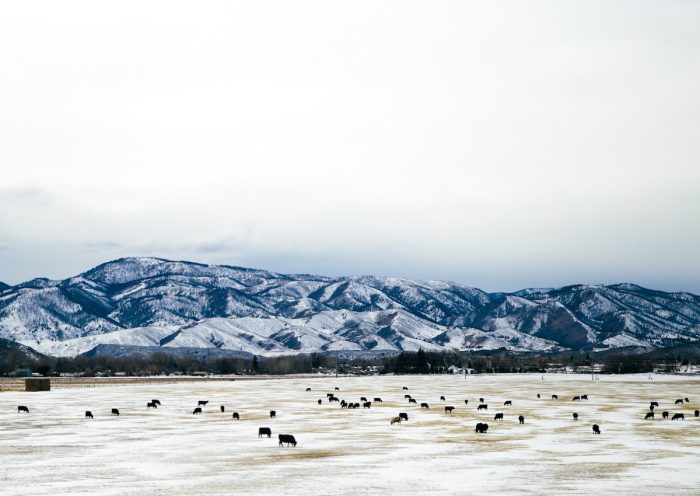 Seeing that wolves need a large amount of space away from human disturbance to establish a home range where they can hunt and den, it’s simple to see that habitat fragmentation and loss are large contributing factors to the decline in gray wolf populations (6).

We’ve set up livestock farming right in the midst of the very nature wolves have historically inhabited. This is especially true when it comes to the prairie lands where gray wolf populations are at highest risk of decline (6) due to the abundance of livestock farms.

Livestock-predator conflicts can result in the lethal removal of a wolf—or even an entire pack (7). And, unfortunately, wolves do not understand the concept of livestock farming; they just see an easy meal.

That’s a problem when we look at the fact that upwards of 654 million acres of land in the US is used for livestock farming, while an additional 538 acres of it is unprotected forest often used to mill trees. That totals to almost 63 percent of the 1.9 billion acres of available land in the US (8).

Looks like we’ve essentially switched from historically herding cattle to herding wolves to their demise as we destroy the gray wolf’s forest habitat, and corral them into our seemingly plentiful but dangerous plains.

Putting our depletion of the gray wolf out to pasture

As humans, we try to be in control of things. We love our furry canines because they (mostly) behave well and are predictable, loyal, and loving towards us. But we are scared of wolves because we cannot domesticate them—because they are difficult to control.

But how about changing our perspective on this. Maybe we don’t need to control something to appreciate it?

As Horning beautifully noted in our meeting, “If compassion is a core value, then it should apply to all living things. The way in which it manifests, it’s gotta influence all of one’s behavior.” 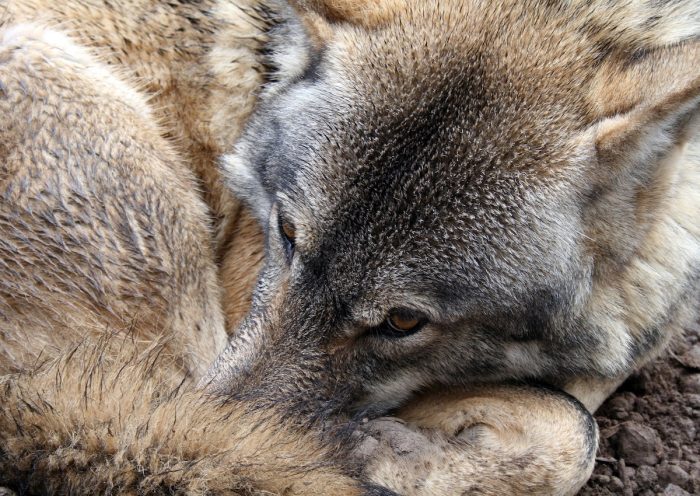 The history and current plight of the gray wolf reminds us that we need to respect wildlife and also accept nature’s own strategy. We can’t and shouldn’t control wildlife—even if that means putting a financial dent in the profits of livestock farmers, the oil industry, and more.

And that leads me to the main takeaway of this article: Remember how we’re the only apex predator gifted with the logical ability to make ethical choices? Well, let’s not allow our fear to disguise the importance of wildlife.

There is a reason why certain interest groups want us to be scared of wolves. It’s our own version of an ecology of fear: it’s easy to incite a fear of predators for the purpose of corralling the masses to act in ways that protect our business model.

Are we all victims of a narrative that was created to protect livestock farming? Who knows.

What we can say is that fear is a powerful emotion that can be used to manipulate our actions and behavior. We know that from relationships, politics, and work. And, too, we know this from nature.

Maybe wolves can provide us with a valuable lesson on how to deal with fear—one that empowers us to tap into our ultimate ability to act in ways that support our ecology’s survival.

We could stop eating meat to make livestock farming a less profitable business. We could protect nature reserves from getting exploited. And we could stop limiting our love to animals we are able to domesticate.

Let’s honor the ecology of fear in wildlife and adopt a sense of wonder about it. After all, wonder is an excellent antidote to irrational terror.

Links referenced in the video: WildEarth Guardians is campaigning against the vicious practice of trapping on public lands—both on our own and in coalition with partners. By ending trapping on public lands, we will make public lands safe and enjoyable for recreationists and wildlife, so please raise your voice today and sign our petition. In case you missed it, on April 1, 2022 all traps, snares, and poisons were banned on over 30 million acres of public lands in New Mexico. Here’s more information about Greater Chaco and the threats the region is facing from fracking. Please take action before May 6 to protect this remarkable landscape. More on a recent lawsuit we filed to defend black-foot ferrets. Here’s the touching piece John wrote previously about encountering a trapping crime scene. Let us extoll the virtues of the Prairie Dog.