Keep your Religious Titles—I’d Rather be a Witch. 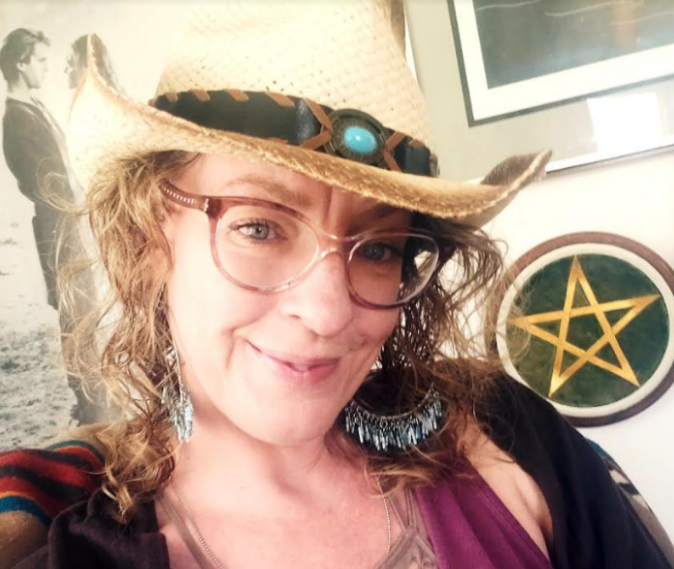 “Not a single woman has been accepted as a Christ, a buddha, a prophet—no. If a woman manages to get into religious matters she is called a witch.” ~ Osho
~

What rules or ordinances must a woman follow to be a witch?

Liberation is precisely why so many people—women, specifically—are drawn to the Earth-born practice of witchcraft.

Paganism provides a living practice that embraces us—all of us—mind, body, and spirit. And it is one of the few spiritual paths that has not been completely polluted by the patriarchy.

Personally, I have no interest in being recognized by the very systems that need to be dismantled (as it’s clear that the majority of the patriarchal values are founded upon systemic psychopathy).

Patriarchal religion, and the Roman Catholic Church, specifically, has done its utmost to uproot our connection to the Mother of the World and prevent us women from not only worshiping Her, but from learning Her ways, Her rhythms, Her medicines, and Her cycles.

The word witch, which in many cultures merely means wise person, has become a smear campaign against women. It has been effectively used to persecute, hunt, terrorize, torture, and keep us in our place for hundreds, if not thousands, of years.

The Inquisition, an institution that was created to root out heresy and exterminate heretics, existed in various forms from the 12th through the 19th century. And to this day still exists under various rebranding (the most recent having occurred in 1965), as a branch of the Roman Catholic Church. The Salem Witch Trials were one of the many incarnations of this heinous and inhumane manifestation of persecution and torture. The Spanish Inquisition, a thinly veiled power grab by the elite under the guise of religious piety, another.

How many doulas, story-tellers, apothecaries, mothers and daughters were murdered under the guise of religious cleansing? Millions. And we have yet to see any form of atonement by the perpetrators.

In 2021, the pope released a decree, called “Spiritus Domini” (The Spirit of the Lord), which allows women to serve as readers and altar servers, as well as to assist priests during service or in administering Holy Communion.

Well, hallelujah! Women can now officially hand out wine and wafers—just the position we have been yearning for. The pope, however, went on to state “the priesthood remains a male-only path.”

So it seems that our options as women, in regards to spiritual matters, is to either get screwed into enlightenment by skeezy New Age gurus or give up sex, family, marriage, and all bodily autonomy to become chattel for the Church.

Docility is often associated with piety, especially in women. Prayer and mediation typically encourage soothing and calming of the system. And most spiritual practice is geared toward this neurological state.

But, given the inclination (and programming), of women toward the psychological survival strategy known as fawning, we have to ask:

Does docility serve women or those who seek to control us?

Being labeled a witch is a sure path to defamation for any powerful woman. Yet, paradoxically, and practiced with fortitude and sobriety, it is one of the only spiritual paths that champions our actual liberation.

The word heretic comes from the Latin haeresis, which means: a school of thought or sect. So to be a heretic is to choose our thoughts (and practices).

And it is the practice of witchcraft—not the philosophy—that makes it potent.

In order to step out of the role allotted to her by patriarchal, religious dogma—to become a person of elevated position in spiritual standing—a woman must, in essence, forsake the prescribed parameters of said religions, and become a heretic or, to use the more colloquial term: a witch.

Go beyond your instant association of hags with wart-covered noses riding on brooms. Or, perhaps, go deeper. When we speak of witches, we often conjure images of what is rightfully recognized as the Crone.

The Crone is woman in her full spiritual power. She is a matriarch. She may have been a mother; she certainly would have passed through that phase of development. She was, inevitably, first a maiden.

Maidenhood, with its ever-blooming youth, is society’s standard for acceptable womanhood. So if we do not think of the Crone when we think of witches, we may think of over-sexualized goth-girls, dressed in black, and f*cking around with crystals. And though that has a certain cultural charm, that is not what it means to be a witch.

The hag’s medicine is ancient, rooted, wise, and wild. It is nothing like that of the doe-eyed, dreamy maiden. We—women—are more complex. We are warriors, creatrixes, shamans, priestesses, lovers, and mothers.

Every culture effigies to the holiness of women—deities, saints, nymphs, goddesses, and buddhas—though She tends to fly under the radar.

“Mary (also Maryam, Mariam, and Meryem [Turkish]) is considered by Islam to be one of the preeminent women to have ever lived and is the only woman mentioned by name in the Qur’an.” (More than in the canonical gospels.)

Buddhism is, yet, another predominantly male and rather misogynis- infected religion, itself. (Look up allegations of sexual misconduct with Buddhist teacher Sakyong Mipham.) But they do recognize several female deities or buddhas.

“Tara is undoubtedly the most powerful female deity in the Buddhist pantheon. Her name means ‘star’ in Sanskrit and she is believed to possess the ability to guide followers, like a star, on their spiritual path.”

In Nepali and Tibetan traditions, Tara (she has five different colors as attributes) is seen as a goddess, or buddha (rather than a bodhisattva). And to my way of thinking, as a semi-formed gnostic, she is yet another permutation of the Original Mother—Tiamat, the “deification of the primordial sea.”

Maybe the real reason that we see so few women as religious leaders is because our spiritual prowess is inextricable from that of the earth and we cannot, in embodied conscious, act as figureheads for institutions that are set on dishonoring and even subjugating Her innate wisdom or that of our own.

Our nature, as spiritual beings, is tied to the soil, our wombs, our blood, our bones, our hands, and the actual works that they do.

We, women—we witches—are too damn busy with the practical work of embodiment: raising children, tending wounds, making food, making love, making homes, and making a difference in every blessed life we touch to give a flying f*ck if some church official can look beyond the dogmatized and stigmatized short-sightedness of its own patriarchal nose for five seconds to see us.

Besides, maybe women simply do not relate to the flying boy religions. What we are waiting for is man to get his head out of the clouds and join us here on the ground where we stand.

As much as we can say that women have been prohibited and excluded from holding certain religious titles, maybe—just maybe—we don’t actually want them.

Please consider Boosting our authors’ articles in their first week. Boosting can help them win Elephant’s Ecosystem and get paid for writing and sharing their story.

Justice Bartlett is a wild woman, writer, witch, matriarch, and consciousness provocateur. As a certified hypnotherapist, with more than 16 years of experience in the healing … Read full bio