Thich Nhat Hanh is Now Interwoven with the Beyond. 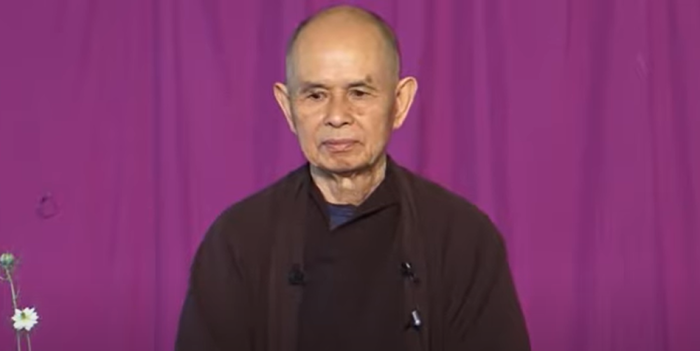 A bright light has ascended and interwoven with the Universe today.

According to Plum Village, where he lived since 1982, “This morning, the 22 of January 2022 Thay, Zen Master Thich Nhat Hanh, has passed away peacefully at Từ Hiếu Temple in Huế, Vietnam, at the age of 95.”

My introduction to Thay (translating to “master” or “teacher”), as he is lovingly called by his students and friends, occurred when I was attending a workshop at Omega Institute in the 90s. A photograph (black and white if memory serves) was of him leading a group of people in a walking meditation. I had heard of mindfulness meditation prior to that, but the sense I had from gazing at that image was that this was someone who embodied mindfulness. Through the years, I have had friends tell me how studying with him either in person or via his books, articles, TED talks, and YouTube videos altered their lives dramatically.

I didn’t have the privilege of meeting him, although he was on my bucket list of someone to interview. But I was inspired by his steadfast devotion to peace and social justice, as well as what is referred to as Engaged Buddhism. It reverberates with the idea of showing up, standing up, and speaking out from a place of mindfulness.

He was nominated for the Nobel Peace Prize by Dr. Martin Luther King, Jr. in a stirring letter to the committee, that included this description of the simple, but mighty Vietnamese Buddhist monk:

“This would be a notably auspicious year for you to bestow your Prize on the Venerable Nhat Hanh. Here is an apostle of peace and non-violence, cruelly separated from his own people while they are oppressed by a vicious war which has grown to threaten the sanity and security of the entire world.”

The catalyst for King’s nomination was Thich Nhat Hanh’s fervent desire to end the war in his native land as he traveled to the United States to urge the government to cease their involvement. Sadly, an award was not given that year. He has been honored by various groups throughout his lifetime, including the Pacem in Terris Peace and Freedom Award in 2015. In 2019, he was given the Outstanding Inner Peace award for encouraging millions around the world to seek inner peace and then put it to practical use in their daily lives. He was also honored with the first Gandhi Mandela Peace Medal in 2019.

His influence extends beyond spiritual communities to the world of business. In 2013, he led a full-day training for Google employees and met with business leaders in Silicon Valley. He contended that mindfulness and commerce are not inherently in opposition, but if engaged in ways that are of benefit to the world and the greater good, business could be a positive force.

He also issued a dire and prescient warning, “You have to accept that this civilization can be destroyed. Not by something outside, but by ourselves. In fact, many civilizations have been destroyed in the past.”

However, he adds this bit of encouragement, “If we allow despair to take over, we have no strength left to do anything at all. That is why we should do anything that can prevent despair, including meditation…because people know what is happening but allow it to happen and cannot do anything—there are so many of them—because they have despair in them, and they try only to survive. You can help them to sort out [what is] inside, you can help them to have hope, to have peace in themselves, and suddenly, they have strength to come back to themselves…and that person will be an instrument for protection of the environment.”

One of my favorite concepts of which he was a proponent is Interbeing.

Thay founded the Order of Interbeing which advocates recognizing that our lives are intricately interwoven. When I consider the idea of Interbeing, I am aware that no person is an island, and yet, it bumps up against my independent, I-can-do-it-myself sensibilities.

What if, I ponder, I really can ask for support without feeling “less than”? How about if I give myself permission to be carried in the same way I hold and carry others? They don’t feel like a burden to me, so why should I believe I would be that for them?

What also fascinates me is that, from a Buddhist perspective, there is no separate self. Through spiritual lenses, we are all one rather than alone. We need each other to continue to survive. The divide-and-conquer mentality that plagues the world is obsolete. We simply can’t do this as independent entities out there in the dark void of space. It reminds me of the root structure of Redwood trees that are shallow and intertwine. It allows them to better withstand toppling in high winds and rising waters.

The reactions to his death from my friends whom he influenced was heartfelt.

“I am part of a sangha in his lineage. Our practice is solely based on his teachings. He is the guide I follow in my own practice. His teachings are the food and fuel I use to nourish my day-to-day life.”

“I saw him speak several years ago and have followed his teachings for over 30 years. I loved his quote ‘let every step bless or kiss the Earth’ (paraphrase). I use this as a meditation on my walks, blessing my neighborhood, the Earth and all beings who share this space with me.”

“There were months I was trying to heal from a difficult relationship with a close family member. I would walk every day and listen to his interview on compassion with Oprah and practice the meditative exercise he shared. It was transformative. I have a deep love for his work!”

“I first encountered his teaching in a book called Peace is Every Step. I remember reading a page titled ‘The Arising of Thoughts.’ It was just a couple of short paragraphs. He somehow summed up everything I felt I’d learned in my first 10-day silent retreat. The more I looked into his life and work, the more moved I was by his politics. He is credited with convincing Martin Luther King to reject the disastrous war in Vietnam. MLK later nominated Thich Nhat Hahn for the Nobel Peace Prize.”

In his memory, please take a moment to breathe and express gratitude for his presence in this world and do a good deed in his honor.

“Walk as if you are kissing the Earth with your feet.” ~ Thich Nhat Hanh, Peace Is Every Step: The Path of Mindfulness in Everyday Life

“Waking up this morning, I smile. Twenty-four brand new hours are before me. I vow to live fully in each moment and to look at all beings with eyes of compassion.”~ Thich Nhat Hanh